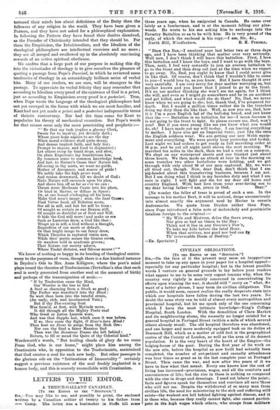 [To sue EDITOR Or TEL "SPECTATOR.") EIx,—Yo11 may like to see, and possibly to print, the enclosed written by a Canadian soldier of twenty to his father from -- Camp. The latter was a bootmaker in Staffs till sums

three years ago, when he emigrated to Canada. He came over lately as a lumberman, and is at the moment felling our pine- woods. He wrote to his son asking him to exchange into the Forestry Battalion so as to be with him. He is very proud of the reply, of which the enclosed is his copy.—I am, Sir, &c.,

" Dna OLD DAD,—I received your last letter two or three days ago, and I have been thinking that matter over very seriously. Well now, I don't think I will leave this battalion. First, I love this battalion and I know the boys, and I want to go with the boys. Then, next, I feel very cowardly to join an oversee battalion to go to the front and then drop out just at the time when we expect to go away; No, Dad, you ought to know that I could never give in like that. Of course, don't think that I wouldn't like to come to you—I would love to, as you know. But I have thought it over very carefully. I am very sorry for dear mother worrying so, but mother knows and you know that I joined to go to the front. It's no use mother thinking she won't see me again, for I think she will, and even so I might go somewhere and be in an accident and get killed, and what would she do then? No, Dad, we never know when we are going to die; but, thank God, I've prepared for death. But I would a million times rather die in the trenches doing my duty than die like that. Well, so now you see, Dad, how it is I'm a pure English lad of the bull-dog breed, and you know, that the — Battalion is no battalion for me—I mean because it is not going to the front to fight. So please excuse me, Dad, won't you? But if you were young like DID you know what you would do, eh? I have made out my will to-day. I am leaving everything to mother. I have also got an Imperial tunic, just like the ones the English soldiers wear. We are getting our new Webb equip- ment and everything. We were pretty busy yesterday and to-day. Last night we had orders to get ready in full marching order at 10 p.m. and be out all night until eleven the next morning. We marched ten miles in the dark, then we had a rest on a common. We slept on our waterproof sheets and one blanket just about three hours. We then made an attack at four in the morning on some trenches two other battalions were holding, and we got through with only about 90 of our men captured. My, we were all tired out, though. Now, dear Dad, don't think that I am pig-headed about this transferring business, because I am not. But I am doing what I think is my bounden duty and what I am sure is right. I will fight and die for my dear old home and country England. With best love from your ever-loving son to

my dear loving father—I am, yours in God, BERT."

[No wonder the feller of trees is proud of such a son. In the message to his mother Bert, it will be noticed, drops unconsciously into almost exactly the argument used by Hector to console Andromache. We quote from Dryden rather than Pope, since Pope introduced a false note of melancholy and pessimistic fatalism foreign to the original :— " My Wife and Mistress, drive thy fears away, Nor give so bad an Omen to the Day : Think not it lies in any Grecian's Pow'r, To take my Life before the fatal Hour.

When that arrives, nor good nor bad can fly Th' irrevocable Doom of Destiny."