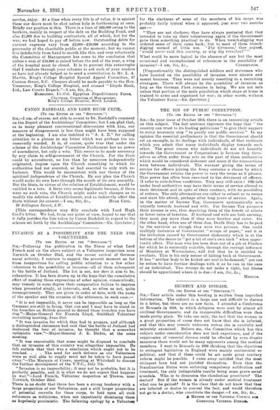 Sns,—I am, of course, not able to assent to Dr. Rashdall's comment on the Report of the Archbishops' Committee; but I am glad that, as in many pleasant conversational «discussions with him, our measure of disagreement is less than might have been supposed at the beginning. I am also indebted to " A. A. B." for calling attention to a phrase in My letter which was perhaps too un- reservedly worded. It is, of course, quite true that under the scheme of the Archbishops' Committee Parliament has no power of amendment, but only a veto. This seems to be made necessary by any claim to self-government of the Church. For the State could by amendment, no less than by measures independently originated, impose upon the Church something to which its authorities had not assented, or had assented to only with re- luctance. This would be inconsistent with our theory of the spiritual independence of the Church. By our plan the Church would make its own laws through the mouth of its own assembly. But the State, in virtue of the relation of Establishment, would be entitled to a veto. A State veto seems legitimate because, if there were no such veto, the Church might snake such changes as to modify the relation of Establishment, and so indirectly affect the [This correspondence may fitly conclude with Lord Hugh Cecil's letter. We feel, from our point of view, bound to say that it fully justifies the line taken by Canon Rashdall in regard to the scheme set forth by the Archbishops' Committee.—ED. Spectator.]