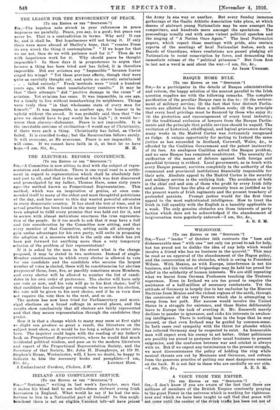 Sin,—A Committee is now sitting to deal with the subject of repre- sentation and redistribution. There is one royal road to a settle- ment in regard to representation which shall be absolutely fair and just to all, and that is the method which was first discovered and promulgated by my father, Thomas Hare, some sixty years ago—the method known as Proportional Representation. This method, which was an inspiration of genius, at once com- mended itself to many of the ablest and most thoughtful politicians of the day, and has never to this day wanted powerful advocates in every democratic country. It has stood the test of time, and in actual practice has been found in the many instances where it has been adopted to fulfil every promise that was held out for it, and to secure with almost meticulous exactness the true representa- tion of the people. Is it too much to ask that it may have a full and fair consideration by the Committee now sitting, and that every member of that Committee, setting aside all attempts to gain undue advantages for his own party, will unite in proposing the adoption of a measure which is the only one which has yet been put forward for anything more than a very temporary solution of the problem of fair representation?

If it is asked by the man in the street what is the change proposed, it may be stated in two sentences. Instead of single- Member constituencies in which every elector is allowed to -vote for one candidate and the candidate who secures the largest number of votes is elected, there will be constituencies for election purposes of three, four, five, or possibly sometimes more Members, and every elector will be allowed to number the list of candi- dates in his own order of preference. The elector will have only one vote as now, and his vote will go to his first choice; but`if that candidate has already got enough votes to secure his election, the vote will be given to his next choice, and if he in turn does not require the vote then to the next, and so on.

The system has now been tried for Parliamentary and muni- cipal elections on a broad suffrage in several places, and the results show conclusively that all electors are fairly represented and that they secure representation through the candidates they prefer.

How it is that a change which to many may seem at first sight so slight can produce so great a result, the literature on the subject must show, as it would be too long a subject to enter into here. The inquirer could begin with the reading of my, father's book on Proportional Representation, where he would find much incidental political wisdom, and pass on to the modern literature and report of the Proportional Representation Society, and the Secretary of that Society, Mr. John H. Humphreys, at 179 St. Stephen's House, Westminster, will, I have no doubt, be happy to indicate to him the necessary books and pamphlets.—I am,