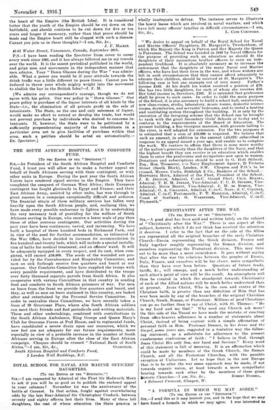 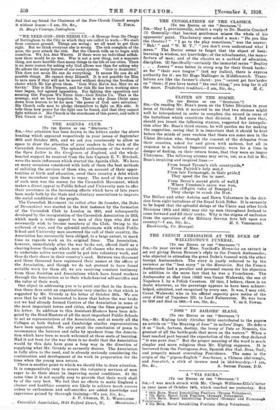 "A FORMULA IN WHICH WE MAY AGREE." [To THE EDITOR.

OF THE " SPECTATOR."] Sra,—I send this as it may interest you, and in the hope that we may have found a formula in which we may agree. I was interested to find that my friend the Chairman of the Free Church Council accepts it without demur.—I am, Sir, &e., T. FIELD. St. Mary's Vicarage, 3,'ottingliant.

" WE NEED GOD—GOD NEEDS US.—A Message from the Clergy of Nottingham to the City in which they are called to work.—We start from common ground. Things are wrong : we all want to get them right. But we think everyone else is wrong. The rich complain of the poor, the poor attack the rich. But the Church tells us to begin with ourselves. WE Au, ARE Wilms°. If there were no individual selfish- ness there would be no war. War is not a new thing, not a separate thing, not more horrible than many things in the life of our cities. There 'is no more reason for asking why God allows war than for asking why He allows the many horrors of our social system. ' GOD IS ALMIGHTY.' This does not mean He can do everything. It means He can do all possible things. He cannot deny Himself. It is not possible for Him to save men if they will not be saved without denying the freedom of choice which He has given them. Gon Wist, Hays Au. Mm To BE SAVED.' This is His Purpose, and for this He has been working since time began, but against opposition. For fighting this opposition and securing this Purpose WE NEED GOD—GOD NEEDS Us. That is the message, and we have forgotten it. That is why Jesus Christ came down from heaven to be for men the power of God unto salvation.' His Church calls men to pledge themselves to fight on His side. It tells them how power for the fight can be found, and that they cannot fight without it. His Church is the storehouse of this power, and calls it THE GRACE OF GOD."