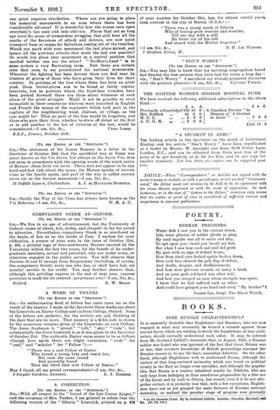 Sia,—The statement of Sir James Ramsay in a letter in the Spectator of October 28th that the sacrificial way at Rome was never known as the Via Sacra, but always as the Sacra Via, does not seem in accordance with the opening words of the ninth satire of Horace : Ibam forte via sacra. There does not appear to be any hard-and-fast rule about the name; for Horace speaks of racram viam in the fourth epode, and part of the way is called summa sacra via on the Ancyra monument.—I am, Sir. &c.,