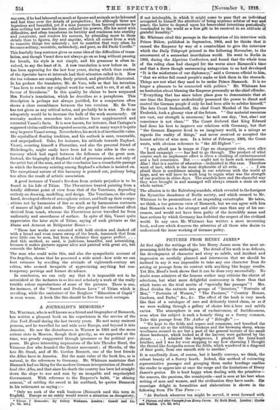 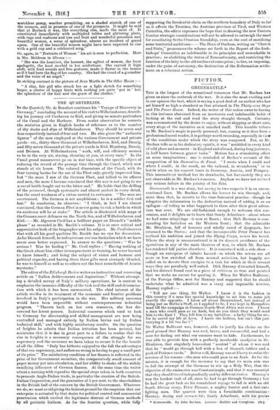 AT first sight the writings of the late Henry James seem the most un- promising field for the anthologist. The detail of his work is so delicate,

the development of character and story so subtle, and incident and impression so carefully planned and interwoven that we should be inclined to say it was impossible to take any one character from its setting or passage from its context with anything like happy results.

Yet Mrs. Head's book shows that it can be done very successfully. No doubt some admirers of the famous author may criticize the choice of selections, but what more delightful controversy is there than that which turns on the rival merits of "specially fine passages" ? Mrs. Head divides the extracts into groups of "Interiors," "Portraits of Men," " Portraits of Women," " The Passions," " Country Houses, Gardens, and Parke," &c., &c. The effect of the book is very much like that of a catalogue of rare and delicately tinted china, or as if

we were walking through a gallery of choice bric-k-brat and subtle curios. The atmosphere is one of exclusiveness, of fastidiousness, even when the subject is such a homely thing as a Surrey. common. Take this passage from The Author of " Beltrafflo" :-

" We kept to the fields and copses and commons, and breathed the same sweet air as the nibbling donkeys and the browsing sheep, whose woolliness seemed to me but a part of the general texture of the small

dense landscape' which looked as if the harvest were gathered by the shears. . . . admired the hedgerows, I plucked the faint-hued

heather, and I was for ever stopping to say how charming I thought the thread-like footpaths across the fields, which wandered in a diagonal of finer grain, from one smooth stile to another."

It is excellently done, of course, but it hardly -conveys, we think, the robust beauty of a Surrey heath. Indeed, this mothod of extracting representative passages and grouping them under headings enables the reader to appreciate at once the range and the limitations of Henry James's genius. He is least happy when dealing with the primitive— the seasons, the passions, the countryside—and is seen at his best when writing of men and women, and the civilization they have made. His consciens delight in formalities and elaborations is shown in the following from The 'Two Faces :-

" At Burbeck wherever tea might be served, it went forward with

• Pictures and other Passage! from Henry James. By Ruth Head. London : Chatto

and Windus. Cd. nog matchless pomp, weather permitting, on a shaded stretch of one of the termees, and in presence of one of the prospects. It might be said that at Burbeck it was, like everything else, made the most of. It constituted immediately with multiplied tables and glittering plate, - with rugs and cushions and ices and fruit and wonderful porcelain and beautiful women, a scene of splendour, almost an incident of grand opera. One of the beautiful women might have been expected to rise with a gold cup and a celebrated song."

Or, again, in " Portraits of Women " his art is seen to perfection. Here is Mrs. Meldrum in Glasses - " She was the heartiest, the keenest, the ugliest of women, the least apologetic, the least morbid in her, misfortune. She carried it high aloft, with pond sounds and free gee:tures, made it flutter in the breeze as if it had been the flag of her country. She had the tread of a grenadier and the voice of an angel."

In striking contrast is the picture of Jean Martle in The Other House :- " A slim, fair girl who struck her as a light sketch for something larger, a cluster of happy hints with nothing yet quite put in' but the splendour of the hair and the grace of the clothes."