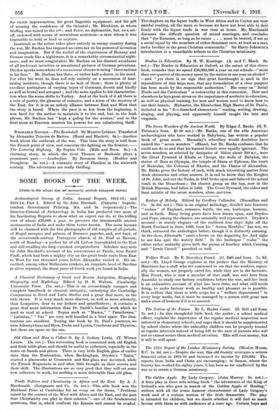 Page 32, 4 November 1916 — Trade Politics and Christianity in Africa and the East. By
Close

Trade Politics and Christianity in Africa and the East. By

A. J. Macdonald. (Longmans and Co. Cs. net.)—This able book won the Maitland Prize at Cambridge for an essay on the thesis, " Problems raised by the contact of the West with Africa and the East, and the part that Christianity can play in their solution"—one of the fundamental questions, that is, which confront the Empire and cannot be evaded The chapters on the liquor traffic in West Africa and in Ceylon are very painful reading, all the more so because we have not been able to deal firmly with the liquor trade in war time at home. Mr. Macdonald discusses the difficult question of mixed marriages, and concludes that "the Eurasian, so long as he exists . . . must be treated, if not as a social equal by the members of either dominant race, at least as a man and a brother in the great Christian community." Sir Harry Johnston's introduction is a remarkable tribute to the Christian missionary.