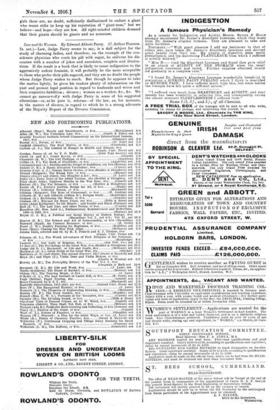 Law and the Woman. By Edward Abbott Parry. (C. Arthur

Pearson. 2e. net.)—Law, Judge Parry seems to say, is a dull subject for the study of charming ladies, and therefore, on the example of the con- siderate physician who coats his pill with sugar, he enlivens his dis- courses with a number of jokes and anecdotes, couplets and illustra- tions. If the result is a book that is likely to cause indignation to the aggressively ardent feminist, it will probably be the more acceptable to those who prefer their pills sugared, and they are no doubt the people whom Judge Parry wishes to reach. But though he appears to take the matter lightly, he gives his readers plenty of information on the past and present legal position in regard to husbands and wives and their respective liabilities ; divorce ; woman as a worker, kc., &o. We cannot go unrmervecry with Judge Parry in some of his suggested alterations—or, as he puts it, reforms—of the law, as, for instance, in the matter of divorce, in regard to which he is a strong advocate of the Majority Report of the Divorce Commission.