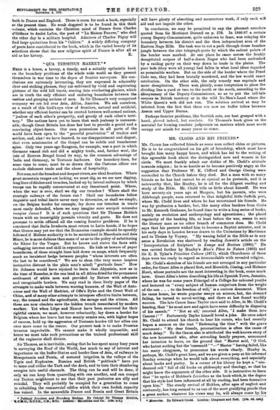 Matz is a brave, a breezy, a timely, and a suitably optimistic) book en the boundary problems of the whole wide world as they present themselves in war time to the doyen of frontier surveyors. His con- clusions are extremely interesting, they are expressed in admirably clear and striking phrases, they am enlivened by vivid and captivating pictures of the wild hill tracts, soaring into everlasting glaciers, which are in truth the only efficient and enduring boundaries between the restless and grasping nations of men. In Sir Thomas's very competent company we are led over Asia, Africa, America. We ask ourselves, as a result of this bird's-eye view of frontiers, natural and artificial, whether any efficient barrier can be erected between well-armed nations, " jealous of each other's prosperity, and greedy of each other's terri- tory." The nations have yet to learn that such jealousy is unreason- able, though Great Britain has done her best to provide a genial and a convincing object-lesson. Our own possessions in all parts of the world have been open to the " peaceful penetration " of traders and settlers, and, alas ! we have learned, to our disappointment and disgust, that even missionaries of the Gospel can be subtle and treacherous spies. Only two years ago Rangoon, for example, was a port in which Germans waxed rich and did a mighty trade, and, further west, the lute of Eastern Bengal found its way, to the common advantage of India and Germany, to Teutonio harbours. Our boundary-lines, for some time to oome, must be so drawn that the Customs officer can exclude dishonest trade and the abuse of hospitality.

Not seas, not the broadest and deepest rivers, are ideal frontiers. Where great mountain ranges are lacking, we must dig, as we are now digging, king lines of ditches and trenches, backed up by lateral railways by which troops can be rapidly concentrated at any threatened point. Where, when the war is over, shall we dig our trenches t Where shall the

strategic railways of the future run Shall our boundaries follow linguistic and tribal limits never easy to determine, or shall we simply, on the Belgian border for example, lay down our trenches in tracts most easily defended, where we may imagine safer ancipiti mirandus imagine Janus? It is of such questions that Sir Thomas Holdich treats with an incorrigibly juvenile vivacity and gusto. He does not presume to settle offhand all the coming frontier problems. If he is convinced that Italia Irredenta must return to Latin bands, if he hopes that Greece may yet see that the Rumanian example should be speedily followed if Helene authority is to be maintained in Macedonia and Asia Minor, he is more dubious than some of us as to the policy of substituting the Rhine for the Vosges. But he knows and states the facts with unflagging interest and skill in exposition. Ho bids us beware of paper boundaries, of those straight lines laid down on maps, which frequently mark an inexistent hedge between peoples " whose interests are often the last to be considered." We are to shun (the very name inspires instinctive distrust in the plain man's mind) " graticule lines." How Dr. Johnson would have rejoiced to learn that Abyssinia, now as in the time of Rasselas, is the one land in all Africa fitted for the permanent -settlement of white men and provided by Nature with adequate and recognizable borders. We may read in these lively pages of the attempts to make walls between warring humans, of the Wall of Ante- nimui and the Wall of Hadrian, of Offa's Dyke and the Great Wall of China, and of many other attempts to interpose effective limits between, say, the nomad and the agriculturist, the savage and the citizen. All these are now obsolete save the hidden trench resuscitated by modern warfare. Yet when Liege and Namur have been recovered for their rightful owners, we must, however reluctantly, lay down a border for Belgium where her brave but too scanty armies can, with higher hopes of success, hold up the aggression of Teutonic hordes till her allies can once more come to the rescue. Our present task is to make Prussian invasion improbable. We cannot make it wholly impossible, and hence we must take such precautions as the trained professional skill of the engineers shall dictate.

Sir Thomas, as is inevitable, seeing that he has spent many busy years In surveying the Roof of the World, has much to say of interest and importance on the buffer-States and border-lines of Asia, of railways in Mesopotamia and Persia, of restored irrigation in the valleys of the Tigris and Euphrates. Russian and British " politicals " have yet to tame and utilize the Turk and the Arab, and to turn their slumbering energies into useful channels. The thing can be and will be done, if only we can keep from quarrelling with one another, and can compel our Teuton neighbours to see that their past jealousies are silly and suicidal. They will probably be occupied for a generation to come in rebuilding the commercial edifice which their own foolish rapacity has ruined. In the meanwhile France and Russia and Great Britain

will have plenty of absorbing and momentous work, if only each will aid and not impede the other.

In conclusion, we may be permitted to cap the pleasant anecdote quoted from Sir Mortimer Durand on p. 279. In 1886-87 a certain young Deputy-Commissioner, quite unknown to fame, was relaying the boundary between his district and the then independent area of the Eastern Naga Hills. His teak was to cut a path through dense bamboo jungle between the zinc telegraph-posts by which the salient points of the border were marked. At one place he came across the freshly decapitated corpses of half-a-dozen Nagai!' who had been ambushed by a raiding party on their way down to trade in the plains. The poor lads (they were all young) had fallen in what local ideas regarded as permissible warfare. But on the aide of the border where the Penal Code ran, they bad been brutally murdered, and the law would exact retribution. On the other side, the only remedy was reprisals and more decapitation. There was, plainly, some temptation to plats the dividing line a yard or two to the north or the south, according to the idiosyncrasy of the Deputy-Commissioner, so as to put the toll-tale corpse. in British territory or in the wild No-Man's-Land where the White Queen's writ did not run. The solution arrived at may be inferred from the fact that there are now no buffer tribes between Assam and Upper Burma.

Perhaps frontier problems, like Scottish cats, are best grasped with a hand, gloved indeed, but resolute. Sir Thomas's book gives us the material for forming resolute judgments on matters which must needs occupy our minds for many years to come.