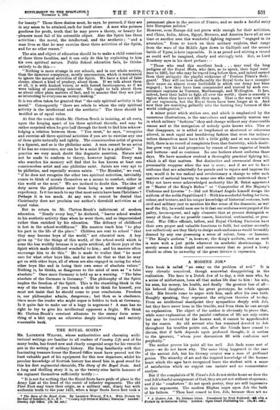 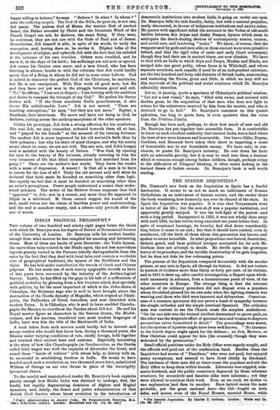 Tars book is called " an essay on the problem of evil." It is very cleverly conceived, though somewhat disappointing in the realization. The hero is a Dutch Jow of to-day, a rich mall who, by a series of misfortunes, loses all that makes life dear to him : his wife, his sons, his money, his health, and finally- the greatest loos of all— his beloved daughter. Like his great prototype, he rebels against God. His friends come to argue with him, each after his own faith. Roughly speaking, they represent the religious theories of to-day. From an intellectual standpoint they sympathise deeply with Jub. but they have never been in like trouble, and from them he can accept no explanation. The object of the author is obviously to prove that, while some explanation of the painful confusion of life not only exists but may be received by the human soul, it cannot he apprehended by the reason. An old servant who has remained devoted to Job throughout his troubles points out, after the friends have ceased to discuss, that if faith depends upon profound thought, it is useless to the ignorant, " whom your discussions fill with confusion and perplexity."

The author proves his point all too well. Job finds some sort of peace—we do riot know why. The same thing happened in the uses of the ancient Jub, but his literary creator was a man of profotuld genius. The wizardry of art and the inspired knowledge of the human heart which the ages have recognized leave the student with a sense of satisfaction which no copyist can imitate and no commentator analyse. But if the complaints of M. Ciran's Job do not strike home as does the real Job's fearful arraignment of God, they are yet not without eloquence; and if the comforters " do not speak poetry, they are still impressive in their arguments. The modern Eliphaz urges upon Jub the faith of his fathers. " Thou hest ceased to live, Job, because thou art no

• A Modern Job. By Etienne (]Iran. Translated by Fred Rothwell Ed with a raises by kretateacou alley. London: Opea Omit Publishing-Co. Ra.fiL avt..j longer willing to believe," he says. " Believe ? In what ? In whom ? " Lake the suffering sceptic. The God of the Bible, he goes on, is not one, but many. The jealous God of Moses, the warrior God of ancient Israel, the rather revealed by Christ and the Incarnate Word of the Fourth Gospel are not, he declares, the same Being. If they were, he continues, they axe not one with the Gods of Paul and of James. Nevertheless, Job himself is able, in spite of his words, to unify the conception, and, having done so, he reviles it. Elipbaz talks of the development of religion, and upbraids Job with the fact that his unbelief is the outcome of his own troubles. Others were troubled, and he knew it, in the days of his faith ; his sufferings are not new or special. Job curses his Creator once more, and a new friend, who has been listening in silence, breaks in with the criticism that Job could hardly speak thus of a Being in whom he did not in some sense believe. God is indeed in character the perfect God of the Christians, he maintains, but He is not omnipotent. With Him work all good men, but He and they have not yet won in the struggle between good and evil. " No," he affirms, " I am not in despair ; I am burning with theambition and desire to compass the triumph of my God." He pushes his theory farther still. " If the Cross manifests God's powerlessness, it also shows His unfathomable Love." Job is not moved. " These are touching conceptions," he says, "but they are not more." Zophar, a Pantheist, here intervenes. We move and have our being in God, be declares, cutting across the anthropomorphism of the other speakers.

Unlike his prototype, Job feels a strong affection for his comforters. The real Job, we may remember, softened towards them all at last, and " prayed for his friends " at the moment of his turning fortunes. The modern Job is more impressed by his old servant's faith than by their polemics ; but why his state of mind changes, and why his misery seems about to cease, we are not told. The sun sets, and Job's hungry soul is satisfied with the beauty of Nature. " Was God, by opening his eyes to the beauty of His universe, already restoring to him the very treasures of life that blind circumstance had snatched from his grasp 7 " These are the author's last words. They leave the reader with a sense of depression. A sunset Is that all a man is to have in return for the loss of all 7 Truly the old servant said well when he declared that faith must be founded on something other than logic. But equally we feel that it must be founded on something other than an artist's perceptions. Fewer people understand a sunset than under- stand polemics. The writer of the Hebrew drama supposes that God " appeared " to Job—not in a sunset, any more than He appeared to Elijah in a whirlwind. M. Giran cannot suggest the sound of the still, small voices nor the vision of limitless power and understanding, and the end is somehow empty, and a silence only prevails after the war of words.