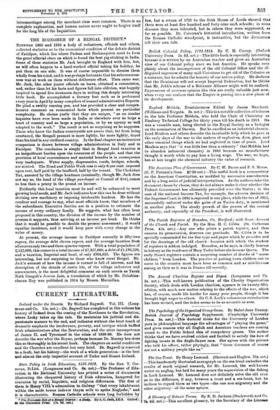 Press. 2s. 6d. not.)—This little book is especially interesting because it is written by an Australian teacher and gives an Australian view of our Colonial policy since we lost America. He speaks very plainly about the incompetence of the old Colonial Office and the ill- disguised eagerness of many mid-Victorians to get rid of the Colonies as a nuisance, but he admits the honesty of our native policy. He declares that the Dominions will not accept Imperial Federation, but he thinks that Mr. Jebb's scheme of a Britannic Alliance might well be realized. Expressions of overseas opinion like this are really valuable just now. when every one realizes that the Empire is passing into a new phase of its development.