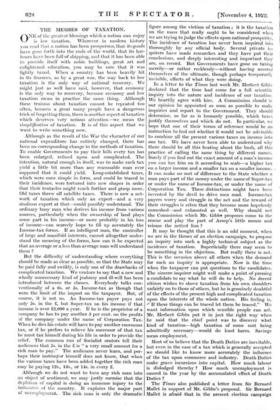 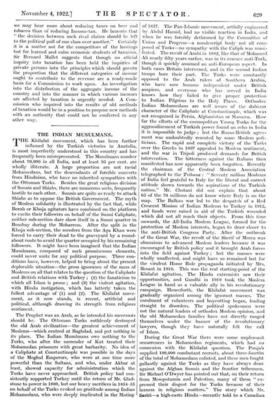 THE MESHES OF TAXATION.

()NE of the greatest- blessings which a nation can enjoy is low taxation. Wherever in modern history you read that a nation has been prosperous, that its goods have gone forth into the ends of the world, that its har- bours have been full of shipping, and that it has been able to provide itself with noble buildings, great art and enlightened education, you may be sure that it was lightly taxed. When a country has been heavily hit in its finances, as by a great war, the way back to low taxation is the only way of national recovery. We might just as well have said, however, that economy is the only way to recovery, because economy and low taxation mean in practice the same thing. Although these truisms about taxation cannot be repeated too often, because a great many people have a dangerous trick of forgetting them, there is another aspect of taxation which deserves very serious attention—we mean the simplification of taxation. It is of this aspect that we want to write something now.

Although as the result of the War the character of our national expenditure has entirely changed, there has been no corresponding change in the methods of taxation. To enable Governments to pay their bills every tax has been enlarged, refined upon and complicated. The intention, natural enough in itself, was to make each tax yield a little bit more than any reasonable man ever supposed that it could yield. Long-established taxes, which were once simple in form, and could be traced in their incidence, were tortured into new shapes in order that their tentacles- might reach further and grasp more. Old taxes threw off satellite taxes. There is now a net- work of taxation which only an expert—and a very studious expert at that—could possibly understand. The ordinary busy man who derives his income from various sources, particularly when the ownership of land plays some part in his income—or more probably in his loss of income—can scarcely hope to fill up accurately the Income-tax forms. If an intelligent man, the controller of large and manifold interests, cannot altogether under- stand the meaning of the forms, how can it be expected that an average or a less than average man will understand them ?

But the difficulty of understanding where everything should be made as clear as possible, so that the State may be paid fully and swiftly, is only one of the drawbacks of complicated taxation. We venture to say that a new and wholly unnecessary kind of jealousy and has been introduced between the classes. Everybody talks con- ventionally of a 6s. or 5s. Income-tax as though that were the limit of the impost on the taxpayer. But, of course, it is not so. An Income-tax payer pays not only 5s. in the £, but Super-tax on his income if that income is over £2,000 a year. If he is the proprietor of a company he has to pay another 5 per cent. on the profits of the company under the name of Corporation Tax. When he dies his estate will have to pay another enormous tax, or if he prefers to relieve his successor of that tax he must tax himself during his life in order to provide the relief. The common run of Socialist orators tell their audiences that 5s. in the £ is " a very small amount for a rich man to pay." The audiences never learn, and per- haps their instrue.tor himself does not know, that when the various taxes have been added together the rich man may be paying 12s., 13s., or 14s. in every £.

Although we do not want to turn any rich man into an object of sentiment, we may justly surmise that the depletion of capital is doing an immense injury to the indu0tries of the _country. It explains the major part of unemployment.. The rich man is only the dramatic figure among the victims of taxation ; it is the taxation on the mass that really ought to be considered when we are trying to judge the effects upon national prosperity. The incidence of taxation has never been inquired into thoroughly by any official body. Several private in- quirers have made researches and they have put their conclusions, and deeply interesting and important they are, on record. But Governments have gone on taxing merrily—or rather recklessly—without having assured themselves of the ultimate, though perhaps temporarily invisible, effects of what they were doing.

In a letter to the Times last week Mr. Herbert Gibbs declared that the time had come for a full scientific inquiry into the nature and incidence of our taxation, We heartily agree with him. A Commission should in our opinion be appointed as soon as possible to make inquiries and report to the Government. They should determine, so far as is humanly possible, which taxes justify themselves and which do not. In particular, we hope that one of their terms of reference would be an instruction to find out whether it would not be advisable to combine all the present various taxes on income into one tax. We have never been able to understand why there should be all this beating about the bush, all this practice of calling the same thing by different names. Surely if you find out the exact amount of a man's income you can tax him on it according to scale—a higher tax on a larger income and a smaller tax on a smaller income. It can make no sort of difference to the State whether a man pays part of the money under the name of Super-tax or under the name of Income-tax, or under the name of Corporation Tax. These distinctions might have been invented by the devil to drive men mad. Income-tax payers worry and struggle in the net and the reward of their struggles is often that they become more hopelessly enmeshed—and exhausted as well. Why should not the Commission which Mr. Gibbs proposes come to the rescue and play the part of Aesop's little mouse and release the netted lion ?

It may be thought that this is an odd moment, when we are in the throes of an election campaign, to propose an inquiry into such - a highly technical subject as the incidence of taxation. Superficially there may seem to be something in the objection. But really there is not. This is the occasion above all others when the demand for such an inquiry is appropriate. Now is the time when the taxpayer can put questions to the candidates. The sincere inquirer might well make a point of pressing a candidate to say what he will do to help. No decent citizen wishes to shove taxation from his own shoulders unfairly on to those of others, but he is genuinely doubtful of the effects of the present high and complicated taxation upon the interests of the whole nation. His feeling is, " If these things can be traced let them be traced." We want information upon which sensible people can act. Mr. Herbert Gibbs put it in just the right way when he said that the chief point was to discover what kind of taxation—high taxation of some sort being admittedly necessary—would do least harm. Savings mean employment.

Most of us believe that the Death Duties arc inevitable, but even in the case of a tax which is generally accepted we should like to know more accurately the influence of the tax upon commerce and industry. Death Duties make grave incursions into capital. How much labour is dislodged thereby ? How much unemployment is caused in the year by the accumulated effect of Death Duties ?

The Times also published a letter from Sir Bernard Mallet in support of Mr. Gibbs's proposal. Sir Bernard Mallet is afraid that in the present election campaign we may hear more about reducing taxes on beer and tobacco than of reducing Income-tax. He laments that " the decision between such rival claims should be left to the political pull of one class over another." Certainly it is a matter not for the competitors of the hustings but for learned and calm economic students of taxation. Sir Bernard Mallet suggests that though no official inquiry into taxation has been held the inquiries of private persons into the principles which should govern the proportion that the different categories of income ought to contribute to the revenue are a ready-made basis for a Commission to work upon. An investigation into the distribution of the aggregate income of the country and into the manner in which various incomes are affected by taxation is urgently needed. A Com- mission who inquired into the results of old methods of taxation would be in a position to propose new methods with an authority that could not be conferred in any other way.