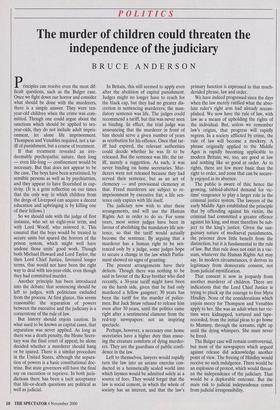 Page 10, 4 November 2000 — The murder of children could threaten the independence of the
Close

The murder of children could threaten the independence of the

Principles can resolve even the most dif- ficult questions, such as the Bulger case. Once we fight down our horror and consider what should he done with the murderers, there is a simple answer. They were ten- year-old children when the crime was com- mitted. Though one could argue about the sanctions which should be applied to ten- year-olds, they do not include adult impris- onment, let alone life imprisonment. Thompson and Venables required, not a tar- iff of punishment, but a course of treatment.

If that treatment revealed an irre- deemably psychopathic nature, then long — even life-long — confinement would be necessary. But that does not appear to be the case. The boys have been scrutinised, by sensible persons as well as by psychiatrists, and they appear to have flourished in cap- tivity. (It is a grim reflection on our times that the only way in which children from the dregs of Liverpool can acquire a decent education and upbringing is by killing one of their fellows.) So we should side with the judge of first instance, who set an eight-year term, and with Lord Woolf, who restored it. This ensured that the boys would be treated in secure units but spared the horrors of the prison system, which might well have undone those units' good work. Though both Michael Howard and Lord Taylor, the then Lord Chief Justice, favoured longer terms, that would not have been the right way to deal with ten-year-olds, even though they had committed murder.

Another principle has been introduced into the debate: that sentencing should be left to judges, with politicians excluded from the process. At first glance, this seems reasonable: the separation of powers between the executive and the judiciary is a cornerstone of the rule of law.

But history should enjoin caution. In what used to be known as capital cases, that separation was never applied. As long as there was a death penalty, the Home Secre- tary was the final court of appeal; he alone decided whether a murderer should hang or be spared. There is a similar procedure in the United States, although the separa- tion of powers is a basic constitutional doc- trine. But state governors still have the final say on execution or reprieve. In both juris- dictions there has been a tacit acceptance that life-or-death questions are political as well as judicial. In Britain, this still seemed to apply even after the abolition of capital punishment. Judges might no longer have to reach for the black cap, but they had no greater dis- cretion in sentencing murderers; the man- datory sentence was life. The judges could recommend a tariff, but this was never seen as binding. In effect, the trial judge was announcing that the murderer in front of him should serve a given number of years as retribution for his offence. Once that tar- iff had expired, the relevant authorities could decide whether he was fit to be released. But the sentence was life; the tar- iff, merely a suggestion. As such, it was never binding on home secretaries. Mur- derers were not released because they had served their sentence, but as an act of clemency — and provisional clemency at that. Freed murderers are subject to re- imprisonment by executive fiat; a life sen- tence only expires with life itself.

The judiciary now wish to alter these arrangements, and will use the Human Rights Act in order to do so. For some years, most senior judges have been in favour of abolishing the mandatory life sen- tence, so that the tariff would actually become the sentence. By arguing that a murderer has a human right to be sen- tenced only by a judge, some judges hope to secure a change in the law which Parlia- ment showed no signs of granting.

The present arrangements have their defects. Though there was nothing to be said in favour of the Kray brother who died recently, a 30-year tariff might have been on the harsh side, given that he had only murdered a fellow gangster; 30 years has been the tariff for the murder of police- men. But Jack Straw refused to release him even after 30 years, until the politics came right after a sentimental clamour from the red-top newspapers: not an inspiring spectacle.

Perhaps, however, a necessary one: home secretaries have a higher duty than ensur- ing the creature comforts of dying murder- ers. They are the guardians of public confi- dence in the law.

Left to themselves, lawyers would rapidly turn the law into an arcane exercise con- ducted in a hermetically sealed world into which laymen would be admitted solely as a source of fees. They would forget that the law is social cement, in which the whole of society has an interest, and that the law's primary function is expressed in that much- derided phrase, law and order.

We have indeed progressed since the days when the law merely ratified what the abso- lute ruler's right arm had already accom- plished. We now have the rule of law, with law as a means of upholding the rights of the individual. But, unless we remember law's origins, that progress will rapidly regress. In a society afflicted by crime, the rule of law will become a mockery. A phrase originally applied to the Middle Ages is rapidly becoming applicable to modern Britain; we, too, are good at law and nothing like so good at order. As to rights, there are few more basic than the right to order, and none that can be secure- ly enjoyed in its absence.

The public is aware of this; hence the growing, tabloid-abetted demand for vic- tims' vengeance to play a larger role in the criminal justice system. The lawyers of the early Middle Ages established the principle that by offending against his victim, the criminal had committed a greater offence against his king, and must therefore be sub- ject to the king's justice. Given the san- guinary nature of mediaeval punishments, the prisoner drew little benefit from the distinction, but it is fundamental to the rule of law. But that rule does not exist in a vac- uum, whatever the Human Rights Act may say. In modern circumstances, it derives its legitimacy from democratic consent, not from judicial mystification.

That consent is now in jeopardy from another murderer of children. There are indications that the Lord Chief Justice is trying to pluck up the courage to free Myra Hindley. None of the considerations which enjoin mercy for Thompson and Venables apply to her. She was an adult when her vic- tims were kidnapped, tortured and tape- recorded, from the initial pleas to go home to Mummy, through the screams, right up until the dying whimpers, She must never be freed.

The Bulger case will remain controversial, but most of the newspapers which argued against release did acknowledge another point of view. The freeing of Hindley would receive no such indulgence. There would be an explosion of protest, which would threat- en the independence of the judiciary. That would be a deplorable outcome. But the main risk to judicial independence comes from judicial irresponsibility.