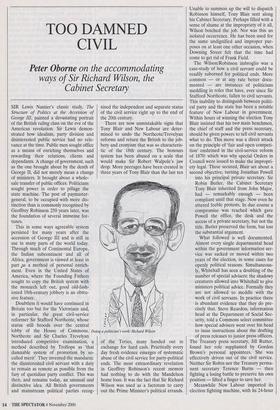 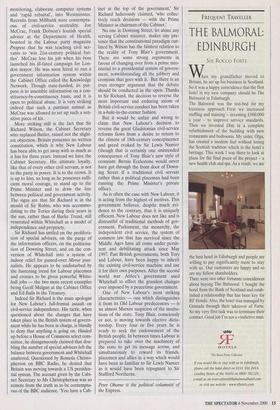 Peter °borne on the accommodating

SIR Lewis Namier's classic study, The Structure of Politics at the Accession of George III, painted a devastating portrait of the British ruling class on the eve of the American revolution. Sir Lewis demon- strated how idealism, party division and disinterested public service had no rele- vance at the time. Public men sought office as a means of enriching themselves and rewarding their relations, clients and dependants. A change of government, such as the one brought about by the death of George II, did not merely mean a change of ministers. It brought about a whole- sale transfer of public offices. Politicians sought power in order to pillage the state machine. The post of paymaster- general, to be occupied with more dis- tinction than is commonly recognised by Geoffrey Robinson 250 years later, was the foundation of several immense for- tunes.

This in some ways agreeable system persisted for many years after the accession of George III and is still in use in many parts of the world today. Through much of Continental Europe, the Indian subcontinent* and all of Africa, government is viewed at least in part as a method of personal enrich- ment. Even in the United States of America, where the Founding Fathers sought to copy the British system with the monarch left out, good old-fash- ioned 18th-century jobbery is an obtru- sive feature.

Doubtless it would have continued in Britain too but for the Victorians and, in particular, the great civil-service reformer Sir Stafford Northcote, whose statue still broods over the central lobby of the House of Commons. Northcote and Sir Charles Trevelyan introduced competitive examination, a method described by Trollope as 'that damnable system of promotion by so- called merit'. They invented the mandarin: the disinterested civil servant with a duty to remain as remote as possible from the fury of quotidian party conflict. This was then, and remains today, an unusual and distinctive idea. All British governments and mainstream political parties recog- nised the independent and separate status of the civil service right up to the end of the 20th century.

There are now unmistakable signs that Tony Blair and New Labour are deter- mined to undo the Northcote/Trevelyan reforms and return the British to the job- bery and cronyism that was so characteris- tic of the 18th century. The honours system has been abused on a scale that would make Sir Robert Walpole's jaw drop. More peerages have been created in three years of Tony Blair than the last ten of the Tories, many handed out in exchange for hard cash. Practically every day fresh evidence emerges of systematic abuse of the civil service for party-political ends. The most extraordinary revelation in Geoffrey Robinson's recent memoir had nothing to do with the Mandelson home loan. It was the fact that Sir Richard Wilson was used as a factotum to carry out the Prime Minister's political errands. Unable to summon up the will to dispatch Robinson himself, Tony Blair sent along his Cabinet Secretary. Perhaps filled with a sense of shame at the impropriety of it all, Wilson botched the job. Nor was this an isolated occurrence. He has been used for the same undignified and improper pur- poses on at least one other occasion, when Downing Street felt that the time had come to get rid of Frank Field.

The Wilson/Robinson imbroglio was a case-study of how a civil servant could be readily suborned for political ends. More common — or at any rate better docu- mented — are instances of politicians meddling in roles that have, ever since Sir Stafford Northcote, fallen to civil servants. This inability to distinguish between politi- cal party and the state has been a notable feature of New Labour in government. Within hours of winning the election Tony Blair insisted that his two main henchmen, the chief of staff and the press secretary, should be given powers to tell civil servants what to do. This move was a direct attack on the principle of 'fair and open competi- tion' enshrined in the civil-service reform of 1870: which was why special Orders in Council were issued to make the impropri- ety legal. These secured, Blair set about a second objective, turning Jonathan Powell into his principal private secretary. Sir Robin Butler, the Cabinet Secretary Tony Blair inherited from John Major, had — remarkably enough — been compliant until that stage. Now even he uttered feeble protests. In due course a compromise was reached which gave Powell the office, the desk and the access of a private secretary, but not the title. Butler preserved the form, but lost the substantial argument.

What followed is well documented. Almost every single departmental head within the government information ser- vice was sacked or moved within two years of the election, in some cases for openly political reasons. Simultaneous- ly, Whitehall has seen a doubling of the number of special advisers: the shadowy creatures allowed into Whitehall to give ministers political advice. Formally they are not allowed to meddle with the work of civil servants. In practice there is abundant evidence that they do pre- cisely that. Steve Reardon, information head at the Department of Social Sec- urity, told a Commons select committee how special advisers went over his head to issue instructions about the drafting of press releases to junior press officers.

The Treasury press secretary, Jill Rutter, found her role supplanted by Gordon Brown's personal appointees. She was effectively driven out of the civil service.

Neither Sir Robin nor the Treasury perma- nent secretary Terence Burns — then fighting a losing battle to preserve his own position — lifted a finger to save her.

Meanwhile New Labour imported its election fighting machine, with its 24-hour monitoring, elaborate computer systems and 'rapid rebuttal', into Westminster. Recruits from Millbank were contemptu- ous of civil-service neutrality. Joe McCrae, Frank Dobson's loutish special adviser at the Department of Health, boasted in the Labour party magazine Progress that he was teaching civil ser- vants to 'win 21st-century political bat- tles'. McCrae lost his job when his boss launched his ill-fated campaign for Lon- don mayor. He was soon hired to run a government information system within the Cabinet Office called the Knowledge Network. Though state-funded, its pur- pose is to assemble information on a con- stituency-by-constituency basis, and it is open to political abuse. It is very striking indeed that such a partisan animal as McCrae was allowed to set up such a sen- sitive piece of kit.

More striking still is the fact that Sir Richard Wilson, the Cabinet Secretary who replaced Butler, raised not the slight- est objection. Britain possesses no written constitution, which is why New Labour has been able to get away with as much as it has for three years. Instead we have the Cabinet Secretary. His ultimate loyalty, like that of every other civil servant, is not to the party in power. It is to the crown. It is up to him, so long as he possesses suffi- cient moral courage, to stand up to the Prime Minister and to draw the line between political and government activity. The signs are that Sir Richard is in the mould of Sir Robin, who was accommo- dating to the Tories during their years in the sun, rather than of Burke Trend, still venerated within Whitehall as a model of independence and propriety.

Sir Richard has smiled on the prolifera- tion of special advisers, on the purge of the information officers, on the politicisa- tion of Downing Street, and on the con- version of Whitehall into a system of indoor relief for passed-over Mirror jour- nalists. He appears to be undisturbed by the hastening trend for Labour placemen and cronies to be given powerful White- hall jobs — the two most recent examples being Geoff Mulgan at the Cabinet Office and Ed Balls in the Treasury.

Indeed Sir Richard is the main apologist for New Labour's full-frontal assault on civil-service independence. His tactic, when questioned about the changes that have taken place in the British system of govern- ment while he has been in charge, is blandly to deny that anything is going on. Hauled up before a House of Commons select com- mittee, he disingenuously claimed that dou- bling the number of special advisers left the balance between government and Whitehall unaltered. Questioned by Romola Christo- pherson on BBC Radio, he denied that Britain was moving towards a US presiden- tial system. The account given by the Cabi- net Secretary to Ms Christopherson was so remote from the truth as to be contemptu- ous of the BBC audience. 'You have a Cab- inet at the top of the government,' Sir Richard ludicrously claimed, 'who collec- tively reach decisions — with the Prime Minister as chairman of the Cabinet.'

No one in Downing Street, let alone any serving Cabinet minister, makes any pre- tence that the constitutional paradigm out- lined by Wilson has the faintest relation to the reality of Tony Blair's government. There are some strong arguments in favour of changing over from a prime min- isterial to a presidential system of govern- ment, notwithstanding all the jobbery and cronyism that goes with it. But there is an even stronger argument that the debate should be conducted in the open. Thanks to Sir Richard, the decision to reverse the most important and enduring axiom of British civil-service conduct has been taken in a-hole-in-the-corner fashion.

But it would be unfair and wrong to claim that New Labour's decision to reverse the great Gladstonian civil-service reforms flows from a desire to return to the climate of 18th-century concupiscence and greed evoked by Sir Lewis Namier (though that is certainly one unintended consequence of Tony Blair's new style of cronyism: Bernie Ecclestone would never have got through the front door of Down- ing Street if a traditional civil servant rather than a political placeman had been running the Prime Minister's private office).

As is often the case with New Labour, it is acting from the highest of motives. This government believes, despite much evi- dence to the contrary, that it is uniquely efficient. New Labour does not like and is distrustful of traditional methods of gov- ernment. Parliament, the monarchy, the independent civil service, the system of common law that has survived since the Middle Ages have all come under persis- tent and debilitating attack since May 1997. Past British governments, both Tory and Labour, have been happy to inherit the existing civil-service machine and use it for their own purposes. After the second world war Attlee's government used Whitehall to effect the grandest changes ever imposed by a peacetime government.

One of New Labour's most striking characteristics — one which distinguishes it from its Old Labour predecessors — is an almost Marxist suspicion of the institu- tions of the state. Tony Blair, consciously or not, is moving towards elective dicta- torship. Every four or five years he is ready to seek the endorsement of the British people. In between times Labour is prepared to take over the machinery of the state to get its message across, and simultaneously to reward its friends, placemen and allies in a way which would have been as familiar to Sir Lewis Namier as it would have been repugnant to Sir Stafford Northcote.

Peter °borne is the political columnist of the Express.