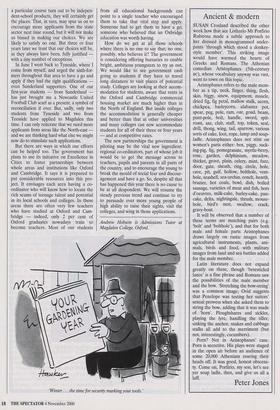 SUSAN Crosland described the other week how that ace Lothario Mr Porfirio Rubirosa made a subtle approach to her dressed in monogrammed under- pants 'through which stood a donkey- style member'. This striking image would have warmed the hearts of Greeks and Romans. The Athenian comedian Aristophanes (5th-century nc), whose vocabulary anyway was vast, went to town on this topic.

It will be observed that a number of these terms are matching pairs (e.g. `bolt' and `bolthole'), and that for both male and female parts Aristophanes draws largely on rustic images from agricultural instruments, plants, ani- mals, birds and food, with military images from land and sea battles added for the male member.

Latin literature does not expand greatly on these, though `betesticled lance' is a fine phrase and Romans saw the possibilities of the male member and the bow. 'Stretching the bow-string' was a common image; Ovid suggests that Penelope was testing her suitors' sexual prowess when she asked them to string the bow, adding that it was made of 'horn'. Ploughshares and sickles, playing the lyre, handling the tiller, sinking the anchor, snakes and cabbage stalks all add to the merriment (but not, interestingly, cucumbers).