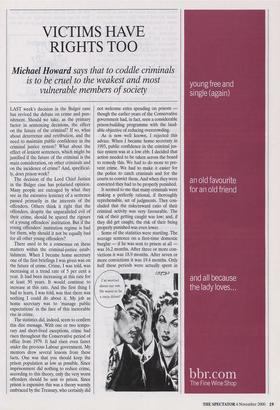 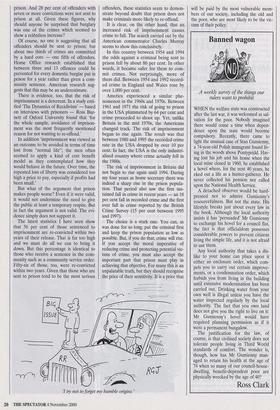 VICTIMS HAVE RIGHTS TOO

LAST week's decision in the Bulger case has revived the debate on crime and pun- ishment. Should we take, as the primary factor in sentencing decisions, the effect on the future of the criminal? If so, what about deterrence and retribution, and the need to maintain public confidence in the criminal justice system? What about the effect of lenient sentences, which might be justified if the future of the criminal is the main consideration, on other criminals and on the incidence of crime? And, specifical- ly, does prison work?

There used to be a consensus on these matters within the criminal-justice estab- lishment. When I became home secretary one of the first briefings I was given was on the future of crime. Crime, I was told, was increasing at a trend rate of 5 per cent a year. It had been increasing at this rate for at least 50 years. It would continue to increase at this rate. And the first thing I had to learn, I was told, was that there was nothing I could do about it. My job as home secretary was to 'manage public expectations' in the face of this inexorable rise in crime.

The statistics did, indeed, seem to confirm this dire message. With one or two tempo- rary and short-lived exceptions, crime had risen throughout the Conservative period of office from 1979. It had risen even faster under the previous Labour government. My mentors drew several lessons from these facts. One was that you should keep the prison population as low as possible. Since imprisonment did nothing to reduce crime, according to this theory, only the very worst offenders should be sent to prison. Since prison is expensive this was a theory warmly embraced by the Treasury, who certainly did not welcome extra spending on prisons though the earlier years of the Conservative government had, in fact, seen a considerable prison:building programme with the laud- able objective of reducing overcrowding.

As is now well known, I rejected this advice. When I became home secretary in 1993, public confidence in the criminal jus- tice system was at a low ebb. I decided that action needed to be taken across the board to remedy this. We had to do more to pre- vent crime. We had to make it easier for the police to catch criminals and for the courts to convict them. And when they were convicted they had to be properly punished.

It seemed to me that many criminals were making a perfectly rational, if thoroughly reprehensible, set of judgments. They con- cluded that the risks/reward ratio of their criminal activity was very favourable. The risk of their getting caught was low; and, if they did get caught, the risk of their being properly punished was even lower.

Some of the statistics were startling. The average sentence on a first-time domestic burglar — if he was sent to prison at all was 16.2 months. After three or more con- victions it was 18.9 months. After seven or more convictions it was 19.4 months. Only half these periods were actually spent in prison. And 28 per cent of offenders with seven or more convictions were not sent to prison at all. Given these figures, why should anyone be surprised that burglary was one of the crimes which seemed to show a relentless increase?

Of course, no one is suggesting that all offenders should be sent to prison; but about two thirds of crimes are committed by a hard core — one fifth of offenders. Home Office research established that between three and 13 offences could be prevented for every domestic burglar put in prison for a year rather than given a com- munity sentence. American research sug- gests that this may be an underestimate.

There is evidence, too, that the risk of imprisonment is a deterrent. In a study enti- tled 'The Dynamics of Recidivism' — based on interviews with prisoners — Ross Bur- nett of Oxford University found that 'for the whole sample, avoidance of imprison- ment was the most frequently mentioned reason for not wanting to re-offend.'

In addition 'imprisonment was viewed as an outcome to be avoided in terms of time lost from "normal life"; the men often seemed to apply a kind of cost benefit model as they contemplated how they would behave in the future. Over time, the repeated loss of liberty was considered too high a price to pay, especially if profits had been small.'

But what of the argument that prison makes people worse? Even if it were valid, it would not undermine the need to give the public at least a temporary respite. But in fact the argument is not valid. The evi- dence simply does not support it.

The latest statistics I have seen show that 56 per cent of those sentenced to imprisonment are re-convicted within two years of their release. That is far too high and we must do all we can to bring it down. But this percentage is identical to those who receive a sentence in the com- munity such as a community service order. Fifty-six of those, too, were re-convicted within two years. Given that those who are sent to prison tend to be the most serious offenders, these statistics seem to demon- strate beyond doubt that prison does not make criminals more likely to re-offend.

It is clear, on the other hand, that an increased risk of imprisonment causes crime to fall. The search carried out by the American commentator Charles Murray seems to show this conclusively.

In this country between 1954 and 1994 the odds against a criminal being sent to prison fell by about 80 per cent. In other words, it became safer for them to com- mit crimes. Not surprisingly, more of them did. Between 1954 and 1992 record- ed crime in England and Wales rose by over 1,000 per cent.

America experienced a similar phe- nomenon in the 1960s and 1970s. Between 1961 and 1971 the risk of going to prison in the USA plummeted by 64 per cent and crime proceeded to shoot up. Yet, unlike Britain in the mid 1970s, the Americans changed track. The risk of imprisonment began to rise again. The result was that between 1980 and 1995 the recorded crime rate in the USA dropped by over 10 per cent. In fact, the USA is the only industri- alised country where crime actually fell in the 1980s.

The risk of imprisonment in Britain did not begin to rise again until 1994. During my four years as home secretary there was indeed a sharp rise in the prison popula- tion. That period also saw the first sus- tained fall in crime in recent years — an 18 per cent fall in recorded crime and the first ever fall in crime reported by the British Crime Survey (15 per cent between 1995 and 1997).

The choice is a stark one. You can, as was done for so long, put the criminal first and keep the prison population as low as possible. But, if you do that, crime will rise. If you accept the moral imperative of reducing crime and protecting potential vic- tims of crime, you must also accept the important part that prison must play in achieving that objective. For many this is an unpalatable truth, but they should recognise the price of their sensitivity. It is a price that will be paid by the most vulnerable mem- bers of our society, including the old and the poor, who are most likely to be the vic- tims of their policy.