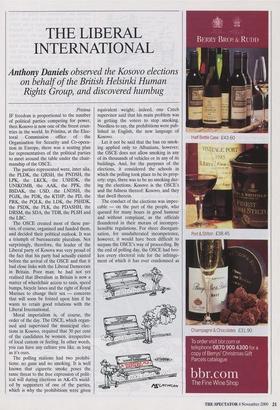 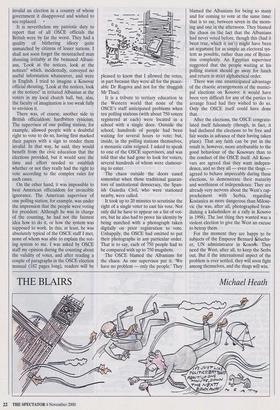 on behalf of the British Helsinki Human Rights Group, and discovered humbug

Pristina IF freedom is proportional to the number of political parties competing for power, then Kosovo is now one of the freest coun- tries in the world. In Pristina, at the Elec- toral Commission office of the Organisation for Security and Co-opera- tion in Europe, there was a seating plan for representatives of the political parties to meet around the table under the chair- manship of the OSCE.

The OSCE created most of these par- ties, of course, organised and funded them, and decided their political outlook. It was a triumph of bureaucratic pluralism. Not surprisingly, therefore, the leader of the Liberal party of Kosova was very proud of the fact that his party had actually existed before the arrival of the OSCE and that it had close links with the Liberal Democrats in Britain. Poor man; he had not yet realised that liberalism in Britain is now a matter of wheelchair access to taxis, speed bumps, bicycle lanes and the right of Royal Marines to change their sex — concerns that will soon be foisted upon him if he wants to retain good relations with the Liberal International.

Moral imperialism is, of course, the order of the day. The OSCE, which organ- ised and supervised the municipal elec- tions in Kosovo, required that 30 per cent of the candidates be women, irrespective of local custom or feeling. In other words, you can have any culture you like, as long as it's ours.

The polling stations had two prohibi- tions: no guns and no smoking. It is well known that cigarette smoke poses the same threat to the free expression of polit- ical will during elections as AK-47s wield- ed by supporters of one of the parties, which is why the prohibitions were given equivalent weight; indeed, one Czech supervisor said that his main problem was in getting the voters to stop smoking. Needless to say, the prohibitions were pub- lished in English, the new language of Kosovo.

Let it not be said that the ban on smok- ing applied only to Albanians, however; the OSCE does not allow smoking in any of its thousands of vehicles or in any of its buildings. And, for the purposes of the elections, it considered the schools in which the polling took place to be its prop- erty: ergo, there was to be no smoking dur- ing the elections. Kosovo is the OSCE's and the fulness thereof: Kosovo, and they that dwell therein.

The conduct of the elections was impec- cable — on the part of the people, who queued for many hours in good humour and without complaint, as the officials floundered in their morass of incompre- hensible regulations. For sheer disorgani- sation, for unadulterated incompetence, however, it would have been difficult to surpass the OSCE's way of proceeding. By the end of polling day, the OSCE had bro- ken every electoral rule for the infringe- ment of which it has ever condemned as invalid an election in a country of whose government it disapproved and wished to see replaced.

There was, of course, another side to British officialdom: hardbitten cynicism. The supervisor of one polling station, for example, allowed people with a doubtful right to vote to do so, having first marked their papers with a sign to render them invalid. In that way, he said, they would benefit from the civic education that the elections provided, but it would save the time and effort needed to establish whether or not they really had the right to vote according to the complex rules for such cases.

On the other hand, it was impossible to beat American officialdom for invincible ignorance. The American supervisor of one polling station, for example, was under the impression that the people were voting for president. Although he was in charge of the counting, he had not the faintest idea how to do it, or how the system was supposed to work. In this, at least, he was absolutely typical of the OSCE staff I met, none of whom was able to explain the vot- ing system to me. I was asked by OSCE staff my opinion during the counting about the validity of votes, and after reading a couple of paragraphs in the OSCE election manual (182 pages long), readers will be pleased to know that I allowed the votes, in part because they were all for the peace- able Dr Rugova and not for the thuggish Mr Thaci.

It is a tribute to tertiary education in the Western world that none of the OSCE's staff anticipated problems when ten polling stations (with about 750 voters registered at each) were located in a school with a single door. Outside the school, hundreds of people had been waiting for several hours to vote; but, inside, in the polling stations themselves, a monastic calm reigned. I asked to speak to one of the OSCE supervisors, and was told that she had gone to look for voters, several hundreds of whom were clamour- ing to enter.

The chaos outside the doors eased somewhat when those traditional guaran- tors of institutional democracy, the Span- ish Guardia Civil, who were stationed nearby, were called.

It took up to 20 minutes to scrutinise the right of a single voter to cast his vote. Not only did he have to appear on a list of vot- ers, but he also had to prove his identity by being matched with a photograph taken digitally on prior registration to vote. Unhappily, the OSCE had omitted to put their photographs in any particular order. That is to say, each of 750 people had to be compared with up to 750 mugshots.

The OSCE blamed the Albanians for the chaos. As one supervisor put it, 'We have no problem — only the people.' They blamed the Albanians for being so many and for coming to vote at the same time: that is to say, between seven in the morn- ing and one in the afternoon. They blamed the chaos on the fact that the Albanians had never voted before, though this (had it been true, which it isn't) might have been an argument for as simple an electoral sys- tem as possible, rather than one of Byzan- tine complexity. An Egyptian supervisor suggested that the people waiting at his polling station should go away for lunch and return in strict alphabetical order.

There was one unanticipated advantage of the chaotic arrangements of the munici- pal elections on Kosovo: it would have been very difficult for any of the parties to arrange fraud had they wished to do so. Only the OSCE itself could have done that.

After the elections, the OSCE congratu- lated itself fulsomely (though, in fact, it had declared the elections to be free and fair weeks in advance of their having taken place). That any faith can be put in the result is, however, more attributable to the good behaviour of the Kosovars than to the conduct of the OSCE itself. All Koso- vars are agreed that they want indepen- dence, and so they all — even the thugs agreed to behave impeccably during these elections, to demonstrate their maturity and worthiness of independence. They are already very nervous about the West's rap- prochement with Serbia, regarding Kostanica as more dangerous than Milose- vic (he was, after all, photographed bran- dishing a kalashnikov at a rally in Kosovo in 1998). The last thing they wanted was a violent election to give the West an excuse to betray them.

For the moment they are happy p be subjects of the Emperor Bernard K6uchn- er, UN administrator in Kosovio. They need the West, after all, to keep the Serbs out. But if the international aspect of the problem is ever settled, they will soon fight among themselves, and the thugs will win.