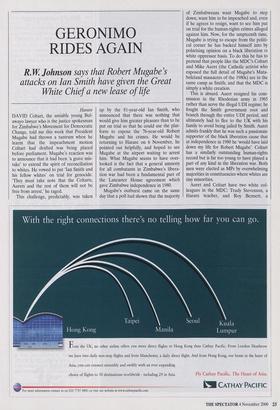 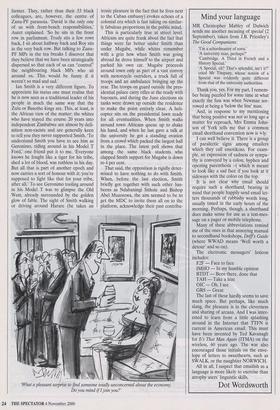 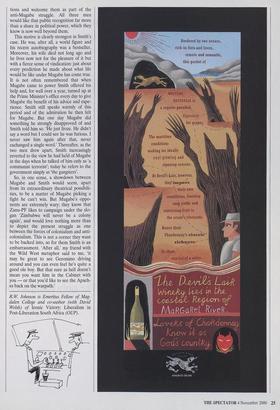 Harare DAVID Coltart, the amiable young Bul- awayo lawyer who is the justice spokesman for Zimbabwe's Movement for Democratic Change, told me this week that President Mugabe had thrown a tantrum when he learnt that the impeachment motion Coltart had drafted was being placed before parliament. Mugabe's reaction was to announce that it had been 'a grave mis- take' to extend the spirit of reconciliation to whites. He vowed to put 'Ian Smith and his fellow whites' on trial for genocide. `They must take note that the Coltarts, Aurets and the rest of them will not be free from arrest,' he raged.

This challenge, predictably, was taken up by the 81-year-old Ian Smith, who announced that there was nothing that would give him greater pleasure than to be put on trial so that he could use the plat- form to expose the 76-year-old Robert Mugabe and his crimes. He would be returning to Harare on 6 November, he pointed out helpfully, and hoped to see Mugabe at the airport waiting to arrest him. What Mugabe seems to have over- looked is the fact that a general amnesty for all combatants in Zimbabwe's libera- tion war had been a fundamental part of the Lancaster House agreement which gave Zimbabwe independence in 1980.

Mugabe's outburst came on the same day that a poll had shown that the majority of Zimbabweans want Mugabe to step down, want him to be impeached and, even if he agrees to resign, want to see him put on trial for the human-rights crimes alleged against him. Now, for the umpteenth time, Mugabe is trying to escape from the politi- cal corner he has backed himself into by polarising opinion on a black liberation vs white oppressor basis. To do this he has to pretend that people like the MDC's Coltart and Mike Auret (the Catholic activist who exposed the full detail of Mugabe's Mata- beleland massacres of the 1980s) are in the same camp as. Smith, and that the MDC is simply a white creation.

This is absurd. Auret resigned his com- mission in the Rhodesian army in 1965 rather than serve the illegal UDI regime; he fought the Smith government root and branch through the entire UDI period, and ultimately had to flee to the UK with his family to avoid being jailed by Smith. Auret admits franldy that he was such a passionate supporter of the black liberation cause that at independence in 1980 he 'would have laid down my life for Robert Mugabe'. Coltart has a similarly outstanding human-rights record but is far too young to have played a part of any kind in the liberation war. Both men were elected as MPs by overwhelming majorities in constituencies where whites are tiny minorities.

Auret and Coltart have two white col- leagues in the MDC: Trudy Stevenson, a Harare teacher, and Roy Bennett, a farmer. They, rather than their 53 black colleagues, are, however, the centre of Zanu-PF paranoia. 'David is the only one of us with front-bench responsibilities,' Auret explained. 'So he sits in the front row in parliament. Trudy sits a few rows back, I sit about halfway back and Roy sits in the very back row. But talking to Zanu- PF MPs in the tea breaks I discover that they believe that we have been strategically dispersed so that each of us can "control" the neighbouring black MPs who sit around us. This would be funny if it weren't so mad and sad.'

Ian Smith is a very different figure. To appreciate his status one must realise that he is now seen as a traditional leader of his people in much the same way that the Zulu or Basotho kings are. This, at least, is the African view of the matter: the whites who have stayed the course 20 years into independent Zimbabwe are almost by defi- nition non-racists and are generally keen to tell you they never supported Smith. 'To understand Smith you have to see him as Geronimo, riding around in his Model T Ford,' one friend put it to me. 'Everyone knows he fought like a tiger for his tribe, shed a lot of blood, was ruthless in his day. But all that is part of another epoch and now carries a sort of honour with it: you're supposed to fight like that for your tribe, after all.' To see Geronimo tooling around in his Model T was to glimpse the Old West, already surrounded by the golden glow of fable. The sight of Smith walking or driving around Harare (he takes an ironic pleasure in the fact that he lives next to the Cuban embassy) evokes echoes of a colonial era which is fast taking on similar- ly fabulous proportions in the public mind.

This is particularly true at street level. Africans are quite frank about the fact that things were far better under Smith than under Mugabe, while whites remember with a grin how when Smith was going abroad he drove himself to the airport and parked his own car. Mugabe proceeds around town only as part of a vast convoy with motorcycle outriders, a truck full of troops and an ambulance bringing up the rear. The troops on guard outside the pres- idential palace carry rifles at the ready with bayonets, and during the June elections six tanks were drawn up outside the residence to make the point entirely clear. A heli- copter sits on the presidential lawn ready for all eventualities. When Smith walks around town Africans queue up to shake his hand, and when he last gave a talk at the university he got a standing ovation from a crowd which packed the largest hall in the place. The latest poll shows that among the same black students who clapped Smith support for Mugabe is down to 4 per cent.

That said, the opposition is rigidly deter- mined to have nothing to do with Smith. When, before the last election, Smith briefly got together with such other has- beens as Ndabaningi Sithole and Bishop Abel Muzorewa, the aim seemed to be to get the MDC to invite them all on to the platform, acknowledge their past contribu- tions and welcome them as part of the anti-Mugabe struggle. All three men would like that public recognition far more than a share in political power, which they know is now well beyond them.

This motive is clearly strongest in Smith's case. He was, after all, a world figure and his recent autobiography was a bestseller. Moreover, his wife died not long ago and he lives now not for the pleasure of it but with a fierce sense of vindication: just about every prediction he made about what life would be like under Mugabe has come true. It is not often remembered that when Mugabe came to power Smith offered his help and, for well over a year, turned up at the Prime Minister's office every day to give Mugabe the benefit of his advice and expe- rience. Smith still speaks warmly of this period and of the admiration he then felt for Mugabe. But one day Mugabe did something he strongly disapproved of and Smith told him so. 'He just froze. He didn't say a word but I could see he was furious. I never saw him again after that, never exchanged a single word.' Thereafter, as the two men drew apart, Smith increasingly reverted to the view he had held of Mugabe in the days when he talked of him only as 'a communist terrorist'; today he refers to the government simply as 'the gangsters'.

So, in one sense, a showdown between Mugabe and Smith would seem, apart from its extraordinary theatrical possibili- ties, to be a matter of Mugabe picking a fight he can't win. But Mugabe's oppo- nents are extremely wary; they know that Zanu-PF likes to campaign under the slo- gan 'Zimbabwe will never be a colony again', and would love nothing more than to depict the present struggle as one between the forces of colonialism and anti- colonialism. This is not a corner they want to be backed into, so for them Smith is an embarrassment. 'After all,' my friend with the Wild West metaphor said to me, 'it may be great to see Geronimo driving around and you can even feel he's quite a good ole boy. But that sure as hell doesn't mean you want him in the Cabinet with you — or that you'd like to see the Apach- es back on the warpath.'