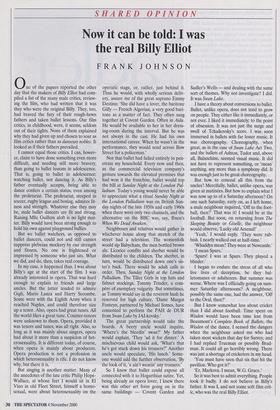 Now it can be told: I was the real Billy

One of the papers reported the other day that the makers of Billy Elliot had com- piled a list of the many male critics, review- ing the film, who had written that it was they who were the original Billy. They, too, had braved the fury of their rough-hewn fathers and taken ballet lessons. Our film critics, in childhood, were, it seems, seldom out of their tights. None of them explained why they had given up and chosen to soar as film critics rather than as danseurs nobles. It looked as if their fathers prevailed.

I cannot equal those critics. I can, howev- er, claim to have done something even more difficult, and needing still more bravery, than going to ballet lessons in adolescence. That is, going to ballet in adolescence; watching ballet, not dancing it. As Billy's father eventually accepts, being able to dance confers a certain status, even among the proletariat. The proletariat, steeped in soccer, rugby league and boxing, admires fit- ness and strength. Whatever else they may be, male ballet dancers are fit and strong. Raising Mlle Guillem aloft is no light mat- ter. Billy would have been strong enough to hold his own against playground bullies.

But we ballet watchers, as opposed to ballet dancers, could not and still cannot suppress plebeian mockery by our strength and fitness. No one is frightened or impressed by someone who just sits. What we did, and do, then, takes real courage.

In my case, it happened thus. I was about Billy's age at the start of the film. I was already interested in opera. That was hard enough to explain to friends and large uncles. But the latter tended to admire Gigli, Mario Lanza and Harry Secombe. Some were with the Eighth Army when it reached Naples, and could therefore size up a tenor. Also, opera had great tunes. All the world likes a great tune. Counter-tenors were unknown to them. Opera, provided it was tenors and tunes, was all right. Also, so long as it was mainly about singers, opera had about it more than a suspicion of het- erosexuality. It is different today, of course, when opera is mainly about producers. Opera production is not a profession in which heterosexuality is rife. I do not know why, but there it is.

But singing is another matter. Many of the anecdotes of the late critic Philip Hope- Wallace, at whose feet I would sit in El Vino in old Fleet Street, himself a homo- sexual, were about heterosexuality on the operatic stage, or, rather, just behind it. Thus he would, with wholly serious deliv- ery, assure me of the great soprano Emmy Destinn: 'She did have a lover, the baritone Gilly — French Algerian, a very good bari- tone as a matter of fact. They often sang together at Covent Garden. Often in Aida. He would be available to her in her dress- ing-room during the interval. But he was not always in the cast. He had his own international career. When he wasn't in the performance, they would send across Bow Street for a policeman.'

Not that ballet had failed entirely to pen- etrate my household. Every now and then, as the commercial television company's gesture towards the elevated promises that had won it the franchise, ballet would top the bill at Sunday Night at the London Pal- ladium. Today's young would never be able to appreciate what a ritual Sunday Night at the London Palladium was on British Sun- day nights of the late 1950s and early 1960s when there were only two channels, and the alternative on the BBC was, say, Ibsen's When We Dead Awaken.

Neighbours and relatives would gather in whichever house along that stretch of the street had a television. The womenfolk would sip Babycham, the men bottled brown ale. Licorice comfits and sherbet would be distributed to the children. The sherbet, in turn, would be distributed down one's sis- ter's back. There would be adult calls to order. Then, Sunday Night at the London Palladium. The Tiller Girls in top hats and fishnet stockings. Tommy Trinder, a com- pere of exemplary vulgarity. But sometimes, as Tommy would say in the reverent hush he reserved for high culture, 'Dame Margot Fonteyn, partnered by Michael Somes, have consented to perform the PAH de DUR from Swan Lake by JAI-kovsky.'

The great partnership would take the boards. A beery uncle would inquire, `Where's the bleedin' swan?' My father would explain, 'They 'ad it for dinner.' A mischievous child would ask, 'What's that he's got stuck down his trousers?' Another uncle would speculate, 'His lunch.' Some- one would add the further observation, 'By the look of it, 'e ain't wearin' any trousers.'

So I knew that ballet could expose all connected with it to Hogarthian satire. Yet, being already an opera lover, I knew there was this other art form going on in the same buildings — Covent Garden and Sadler's Wells — and dealing with the same sort of themes. Why not investigate? I did. It was Swan Lake.

I have a theory about conversions to ballet. Ballet, unlike opera, does not tend to grow on people. They either like it immediately, or not ever. I liked it immediately; to the point of obsession. It was not just the surge and swell of Tchaikovsky's score. I was soon immersed in ballets with far lesser music. It was choreography. Choreography, when great, as in the case of Swan Lake Act Two, and the ballets of Ashton, Tudor and, above all, Balanchine, seemed visual music. It did not have to represent something, or 'mean' anything, any more than a symphony did. It was enough just to be great choreography.

But how to conceal all this from the uncles? Mercifully, ballet, unlike opera, was given at matinees. But how to explain what I was now up to of a Saturday afternoon? On one such Saturday, early on, as I left home, a male neighbour inquired, 'Off to the foot- ball, then?' That was it! I would be at the football. But soon, on returning from The Sleeping Beauty or Giselle, the neighbour would observe, 'Lucky old Arsenal!'

`Yeah,' I would reply. 'They were rub- bish. I nearly walked out at half-time.'

`Whaddya mean? They were at Newcastle.' `I mean Spurs.'

`Spurs! I was at Spurs. They played a blinder.'

I began to endure the stress of all who live lives of deception, be they bal- letomanes or adulterers. But summer was worse. Where was I officially going on sum- mer Saturday afternoons? A neighbour, possibly the same one, had the answer, 'Off to the Oval, then?'

But I knew somewhat less about cricket than I did about football. Time spent on Wisden would have been time lost from Beaumont's Complete Book of Ballets, the Wisden of the dance. I sensed the dangers when the neighbour asked me who had taken most wickets that day for Surrey, and I had replied Trueman or possibly Brad- man. It could all go horribly wrong. There was just a shortage of cricketers in my head.

`You must have seen that six that hit the pavilion. Who got it?'

So it was best to admit everything. People took it badly. I do not believe in Billy's father. It was I, and not some soft film crit- ic, who was the real Billy Elliot.