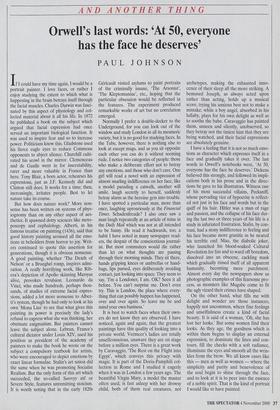 Orwell's last words: 'At 50, everyone has the face he deserves'

If I could have my time again, I would be a portrait painter. I love faces, or rather I enjoy studying the extent to which what is happening in the brain betrays itself through the facial muscles. Charles Darwin was fasci- nated by this aspect of physiology and col- lected material about it all his life. In 1872 he published a book on the subject which argued that facial expression had once served an important biological function. It was used to inspire fear and so to increase power. Politicians know this. Gladstone used his fierce eagle eyes to reduce Commons opponents to abject silence. Churchill culti- vated his scowl in the mirror. Clemenceau and de Gaulle went in for inscrutability, rarer and more valuable in France than here. Tony Blair, a born actor, rehearses his expressions, just as J.F. Kennedy did and Clinton still does. It works for a time; then, increasingly, irritates people. Best to let nature take its course.

But how does nature work? More non- sense has been written on systems of phys- iognomy than on any other aspect of aes- thetics. It spawned dotty sciences like meto- poscopy and cephalology. Alberti, in his famous treatise on painting (1436), said that good history painting aroused all the emo- tions in beholders from horror to joy. Writ- ers continued to quote this assertion for generations, though it is obvious nonsense. A good painting, whether 'The Death of Nelson' or a Brueghel romp, inspires admi- ration. A really horrifying work, like Rib- era's depiction of Apollo skinning Marsyas alive, provokes revulsion. Leonardo da Vinci, who made hundreds, perhaps thou- sands, of studies of extreme facial expres- sions, added a lot more nonsense to Alber- ti's system, though he had only to look at his own 'Mona Lisa' to see that what gives this painting its power is precisely the lady's refusal to express what she was thinking, her obstinate enigrnatism. But painters cannot leave the subject alone. Lebrun, France's cultural dictator under Louis XIV, used his position as president of the academy of painters to make the book he wrote on the subject a compulsory textbook for artists, who were encouraged to depict emotions by exact linear formulae. Stalin's art union did the same when he was promoting Socialist Realism. But the only form of this art which succeeded, the so-called Surovyy stil or Severe Style, features unremitting stoicism. It is worth noting that in the early 1820s Gericault visited asylums to paint portraits of the criminally insane, 'The Arsonist', `The Kleptomaniac', etc., hoping that the particular obsession would be reflected in the features. The experiment produced remarkable works of art but no correlation emerged.

Normally I prefer a double-decker to the Underground, for you can look out of the window and study London in all its mesmeric variety, but it is no good for studying faces. In the Tube, however, there is nothing else to look at except mugs, and as you sit opposite each other you can do it without seeming rude. I notice two categories of people: those who make a deliberate effort not to betray any emotions, and those who don't care. One girl will read a novel with an expression of almost snarling indifference on her face, like a model parading a catwalk, another will smile, laugh secretly to herself, suddenly betray alarm as the heroine gets into trouble. I have spotted a particular man, more than once, laughing uproariously at the Financial Times. Schadenfreude? I also once saw a man laugh repeatedly at an article of mine in the Daily Mail which was not at all intended to be funny. He read it backwards, too, a habit I have noted in many newspaper read- ers, the despair of the conscientious journal- ist. But most commuters would die rather than let on what thoughts are passing through their morning minds. They sit there, hands gripping knees or umbrellas or hand- bags, lips pursed, eyes deliberately avoiding contact, just looking into space. They seem to say, 'I'm a Londoner, I am. OK? Seen it all before. You can't surprise me. Don't even try. This is London, the place where every- thing that can possibly happen has happened, over and over again. So leave me be and mind your own business.'

It is best to watch faces when their own- ers do not know they are observed. I have noticed, again and again, that the greatest paintings have this quality of looking into a private world. Vermeer's ladies are totally unselfconscious, unaware they are on stage before a million eyes. There is a great work by Caravaggio, 'The Rest on the Flight into Egypt', which conveys this privacy with magic. It is part of the Doria-Pamphili col- lection in Rome and I studied it eagerly when it was in London a few years ago. The beautiful Virgin Mary, a model the master often used, is fast asleep with her drowsy child, both of them real creatures, not archetypes, making the exhausted inno- cence of their sleep all the more striking. A bemused Joseph, as always acted upon rather than acting, holds up a musical score, trying his anxious best not to make a mistake; while a boy angel, absorbed in his lullaby, plays for his own delight as well as to soothe the babe. Caravaggio has painted them, unseen and silently, unobserved, so they betray not the tiniest hint that they are being watched, and their facial expressions are absolutely genuine.

I have a feeling that it is not so much emo- tions as character which expresses itself in a face and gradually takes it over. The last words in Orwell's notebooks were, 'At 50, everyone has the face he deserves.' Dickens believed this strongly, and followed its impli- cations both in his prose and in the direc- tions he gave to his illustrators. Witness one of his most successful villains, Pecksniff, whose pervading vice of hypocrisy is reflect- ed not just in his face and words but in the quiff of his hair. Hitler was a man of rage and passion, and the collapse of his face dur- ing the last two or three years of his life is a study in infuriated frustration. Stalin, by con- trast, had a stony indifference to feeling and his face became more granitic as he neared his terrible end. Mao, the diabolic joker, who launched his blood-soaked Cultural Revolution for fun and to ward off boredom, dissolved into an obscene, cackling mask which gradually rinsed itself of all apparent humanity, becoming mere parchment. Almost every day the newspapers show us photographic examples of this fearsome pro- cess, as monsters like Mugabe come to fit the ugly vizard their crimes have shaped.

On the other hand, what fills me with delight and wonder are those instances, happily not uncommon, where fine feelings and unselfishness create a kind of facial beauty. It is said of a woman, 'Oh, she has lost her looks.' But some women find their looks. As they age, the goodness which is within them begins to display an external expression, to dominate the lines and con- tours, fill the cheeks with a soft radiance, illuminate the eyes and smooth all the wrin- kles from the brow. We all know cases like this — men as well as women — where the simplicity and purity and benevolence of the soul begin to shine through the face, and to look at it is to peer into the essence of a noble spirit. That is the kind of portrait I would like to have painted.