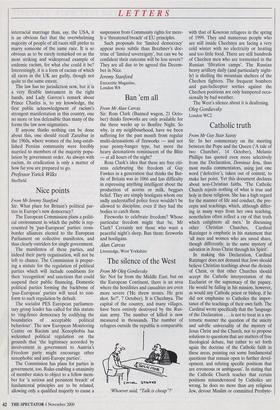 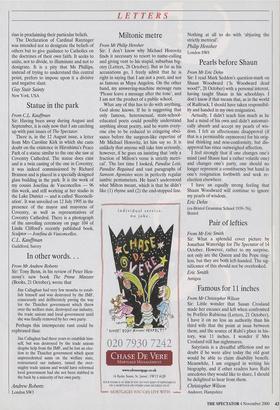 From Mr Guy Stair Sainty Sir: In her commentary on the meeting between the Pope and the Queen CA tale of two Churches', 14 October), Melanie Phillips has quoted even more selectively from the Declaration, Dominus Iesu, than most media commentators, using just one word (`defective), taken out of context, to make her point. Yet this document declares about non-Christian faiths, 'The Catholic Church rejects nothing of what is true and holy in these religions. She has a high regard for the manner of life and conduct, the pre- cepts and teachings, which, although differ- ing in many ways from her own teaching, nonetheless often reflect a ray of that truth which enlightens all men.' in discussing other Christian Churches, Cardinal Ratzinger is emphatic in his statement that `all men and women who are saved share, though differently, in the same mystery of salvation in Jesus Christ through his Spirit'.

In making this Declaration, Cardinal Ratzinger does not demand that Jews should believe Christian teachings about the divinity of Christ, or that other Churches should accept the Catholic interpretation of the Eucharist or the supremacy of the papacy. He would be failing in his mission, however, as would any Catholic priest or bishop, if he did not emphasise to Catholics the impor- tance of the teachings of their own faith. The Cardinal wrote specifically that the 'language of the Declaration . . . is not to treat in a sys- tematic manner the question of the unicity and salvific universality of the mystery of Jesus Christ and the Church, nor to propose solutions to questions that are matters of free theological debate, but rather to set forth again the doctrine of the Catholic faith in these areas, pointing out some fundamental questions that remain open to further devel- opment, and refuting specific positions that are erroneous or ambiguous'. In stating that the Catholic Church teaches that certain positions misunderstood by Catholics are wrong, he does no more than any religious Jew, devout Muslim or committed Presbyte- rian in proclaiming their particular beliefs.

The Declaration of Cardinal Ratzinger was intended not to denigrate the beliefs of others but to give guidance to Catholics on the doctrines of their own faith. It seeks to unite, not to divide, to illuminate and not to denigrate. It is a pity that Ms Phillips, instead of trying to understand this central point, prefers to impose upon it a divisive and negative slant.