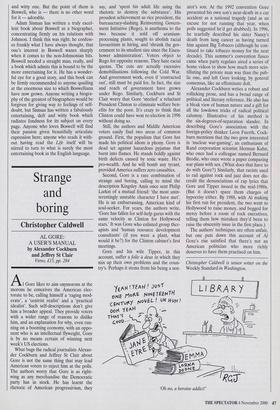 AL GORE: A USER'S MANUAL by Alexander Cockburn and Jeffrey St Clair Verso, £15, pp. 284 Al Gore likes to aim oxymorons at the morons he conceives the American elec- torate to be, calling himself a 'raging mod- erate', a 'centrist realist' and a 'practical idealist'. Such self-descriptions don't give him a broader appeal. They provide voters with a wider range of reasons to dislike him, and an explanation for why, even run- ning on a booming economy, with an oppo- nent who is an intellectual flyweight, Gore is by no means certain of winning next week's US elections.

What bugs the radical journalists Alexan- der Cockburn and Jeffrey St Clair about Gore is not the same thing that may lead American voters to reject him at the polls. The authors worry that Gore is as right- wing as any merchandise the Democratic party has in stock. He has learnt the rhetoric of American progressivism, they say, and 'spent his adult life using the rhetoric to destroy the substance'. His proudest achievement as vice president, the bureaucracy-slashing. Reinventing Govern- ment Initiative (Rego), is anathema to the two because it sold off uranium- processing plants, sought to abolish racial favouritism in hiring, and 'shrunk the gov- ernment to its smallest size since the Eisen- hower administration'. Voters object to Rego for opposite reasons. They hate racial quotas. The cuts are actually excessive demobilisation following the Cold War. And government work, even if 'contracted out', still must be paid for. In fact, the size and reach of government have grown under Rego. Similarly, Cockburn and St Clair worry that Gore 'steeled' a reluctant President Clinton to eliminate welfare ben- efits for the poor. It's crazy to think that Clinton could have won re-election in 1996 without doing so.

Still, the authors and Middle American voters easily find two areas of common ground. First, the populism that Gore has made his political idiom is phony. Gore is dead set against hazardous pyjamas that burst into flames. He stands boldly against birth defects caused by toxic waste. He's pro-wealth. And he will bomb any tyrant, provided America suffers zero casualties.

Second, Gore is a rare combination of strange and boring, calling to mind the description Kingsley Amis once sent Philip Larkin of a mutual friend: 'the most unin- terestingly unstable character I have met'. He is an embarrassing, American kind of soul-seeker. For years, the authors write, `Gore has fallen for self-help gurus with the same velocity as Clinton for Hollywood stars.' It was Gore who enlisted group ther- apists and 'human resource development consultants' (if you were a plant, what would it be?) for the Clinton cabinet's first meetings.

Gore and his wife Tipper, in this account, suffer a folk a deux in which they mix up their own problems and the coun- try's. Perhaps it stems from his being a sen- ator's son. At the 1992 convention Gore presented his own son's near-death in a car accident as a national tragedy (and as an excuse for not running that year, when polls suggested he'd get drubbed). In 1996, he tearfully described his sister Nancy's death from lung cancer as having turned him against Big Tobacco (although he con- tinued to take tobacco money for the next decade). This summer's convention fiasco came when party regulars aired a series of home videos to show how much more scin- tillating the private man was than the pub- lic one, and left Gore looking, by general consensus, like an effeminate dolt.

Alexander Cockburn writes a robust and rollicking prose, and has a broad range of political and literary reference. He also has a bleak view of human nature and a gift for all the lowdown tricks of radical political calumny. Illustrative of his method is the six-degrees-of-separation slander. In describing Gore's association with the foreign-policy thinker Leon Fuerth, Cock- burn mentions that the two grew interested in 'nuclear war-gaming', an enthusiasm of Rand corporation scientist Herman Kahn, who once had a colleague named Bernard Brodie, who once wrote a paper comparing war plans with sex. (What does that have to do with Gore?) Similarly, that racists used to rail against rock and jazz does not dis- credit the denunciations of rap lyrics that Gore and Tipper issued in the mid-1980s. (But it doesn't spare them charges of hypocrisy either. By 1988, with Al making his first run for president, the two went to Hollywood to raise money, and begged for mercy before a room of rock executives, telling them how mistaken they'd been to raise the obscenity issue in the first place.) The authors' techniques are often unfair, but one puts down this account of Al Gore's rise satisfied that there's not an American politician who more richly deserves to have them practised on him.

Christopher Caldwell is senior writer on the Weekly Standard in Washington.