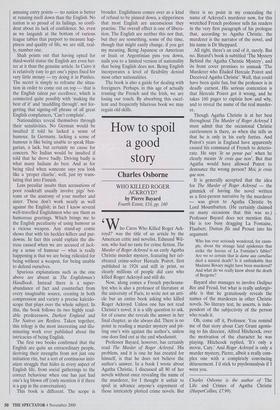 How to spoil a good story

WHO KILLED ROGER ACKROYD? by Pierre Bayard Fourth Estate, £10, pp. 160 Who Cares Who Killed Roger Ack- royd?' was the title of an article by the American critic and novelist, Edmund Wil- son, who had no taste for crime fiction. The Murder of Roger Ackroyd is an early Agatha Christie murder mystery, featuring her cel- ebrated crime-solver Hercule Poirot, first published in 1926 and still in print, so clearly millions of people did care who killed Roger Ackroyd and still do.

Now, along comes a French psychoana- lyst who is also a professor of literature at the university of Paris, to write not an arti- cle but an entire book asking who killed Roger Ackroyd. Unless one has not read Christie's novel, it is a silly question to ask, for of course she reveals the answer in her final chapter, as she always did. There is no point in reading a murder mystery and pit- ting one's wits against the author's, unless one does find out at the end whodunnit.

Professor Bayard, however, has certainly read The Murder of Roger Ackroyd. His problem, and it is one he has created for himself, is that he does not believe the author's answer. In a book I wrote about Agatha Christie, I discussed all 80 of her novels without once revealing the name of the murderer, for I thought it unfair to spoil in advance anyone's enjoyment of those intricately plotted crime novels. But there is no point in my concealing the name of Ackroyd's murderer now, for this wretched French professor tells his readers in the very first paragraph of his prologue that, according to Agatha Christie, the murderer is the narrator of the novel, and his name is Dr Sheppard.

All right, there's an end of it, surely. But no. Bayard's book is subtitled 'The Mystery Behind the Agatha Christie Mystery', and its front cover promises to unmask 'The Murderer who Eluded Hercule Poirot and Deceived Agatha Christie'. Well, that could have been quite fun, but the professor is in deadly earnest. His serious contention is that Hercule Poirot got it wrong, and he takes 160 pages to explain how and why, and to reveal the name of the real murder- er.

Though Agatha Christie is at her best throughout The Murder of Roger Ackroyd I must admit that the occasional Christie carelessness is there, as when she tells us that he is only in his early forties. And Poirot's years in England have apparently caused his command of French to deterio- rate. He says Ve ne pense pas' when he clearly means Ve crois que non'. But that Agatha would have allowed Poirot to denounce the wrong person? Moi, je crois que non.

It is generally accepted that the idea for The Murder of Roger Ackroyd — the gimmick of having the novel written as a first-person narrative by the murderer — was given to Agatha Christie by Lord Mountbatten. (He certainly claimed on many occasions that this was so.) Professor Bayard does not mention this. He is too busy dragging La Fontaine, Flaubert, Dumas firs and Proust into his argument.

Who has ever seriously wondered, for exam- ple, about the strange fatal epidemics that strike the heroes of La Fontaine's fables? Are we so certain that la dame aux camelias died a natural death? Is it unthinkable that Madame Bovary might have been murdered? And what do we really know about the death of Bergotte?

Bayard also manages to involve Oedipus Rex and Freud, but what is really unforgiv- able is that he gratuitously reveals the names of the murderers in other Christie novels. No literary text, he asserts, is inde- pendent of the subjectivity of the person who reads it.

Oh, come off it, Professor. You remind me of that story about Cary Grant agonis- ing to his director, Alfred Hitchcock, over the motivation of the character he was playing. Hitchcock replied, 'It's only a movie, Cary.' And Roger Ackroyd is only a murder mystery, Pierre, albeit a really com- plex one with a completely convincing denouement. I'd stick to psychoanalysis if I were you.

Charles Osborne is the author of The Life and Crimes of Agatha Christie (HarperCollins, £7.99).