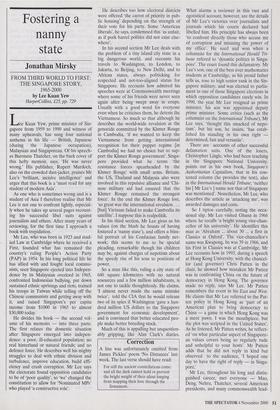 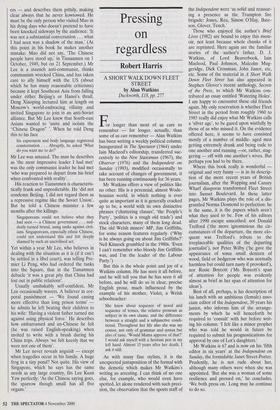 FROM THIRD WORLD TO FIRST: THE SINGAPORE STORY, 1965-2000 by Lee Kuan Yew HarperCollins, £25, pp. 729 Lee Kuan Yew, prime minister of Sin- gapore from 1959 to 1990 and witness of many upheavals, has sung four national anthems in his life — British, Japanese (during the Japanese occupation), Malaysian and Singaporean. Of his speech- es Baroness Thatcher, on the back cover of this hefty memoir, says, 'He was never wrong.' His publisher, Rupert Murdoch, also on the crowded dust-jacket, praises Mr Lee's 'brilliant, incisive intelligence' and urges that this book is a 'must read for any student of modern Asia'.

As one who is sometimes wrong and is a student of Asia I therefore realise that Mr Lee is not one to confront lightly, especial- ly when he takes up several pages recount- ing his successful libel suits against journalists and others. After many years of reviewing, for the first time I approach a book with trepidation.

Mr Lee, who was born in 1923 and stud- ied Law at Cambridge where he received a First, founded what has remained the country's ruling People's Action Party (PAP) in 1954. In his long political life be has allied with and fought local commu- nists, seen Singapore ejected into Indepen- dence by its Malaysian overlord in 1965, confronted Indonesian bullying, put down sustained ethnic uprisings and riots, trained his troops in Taiwan while telling off the Chinese communists and getting away with it, and raised Singapore's per capita income from $1000 in 1965 to almost $30,000 today.

He divides his book — the second vol- ume of his memoirs — into three parts. The first relates the domestic situation after Singapore emerged into indepen- dence: a poor, ill-educated population; no real hinterland or natural friends; and no defence force. He describes well his mighty struggles to deal with ethnic division and turbulence, improve education, build effi- ciency and crush corruption. Mr Lee says the electorate found opposition candidates to be of 'poor quality', so 'we' changed the constitution to allow for 'Nominated MPs' who played 'a constructive role'. He describes too how electoral districts were offered 'the carrot of priority in pub- lic housing' depending on the strength of their vote for his party. Some 'American liberals', he says, condemned this as unfair, as if pork barrel politics did not exist else- where'.

In his second section Mr Lee deals with the problem of a tiny island city state in a big dangerous world, and recounts his travels to Washington, to London, to Jakarta, to Beijing, to New Delhi, and to African states, always politicking for respected and not-too-aligned status for Singapore. He recounts how admired his speeches were at Commonwealth meetings where some of his friends were never seen again after being swept away in coups. Usually with a good word for everyone even when he criticises them, he detests the Vietnamese. So much so that although he describes the world-wide revulsion at the genocide committed by the Khmer Rouge in Cambodia, 'if we wanted to keep the Vietnamese from getting international recognition for their puppet regime [in Cambodia] we had no choice but to sup- port the Khmer Rouge government'. Singa- pore provided what he terms 'the resistance forces spearheaded by the Khmer Rouge' with small arms. Britain, the US, Thailand and Malaysia also were involved in this repulsive alliance and 'Chi- nese military aid had ensured that the Khmer Rouge remained the strongest force'. In the end the Khmer Rouge lost, `so great was the international revulsion . . . [but] Vietnam failed to make Cambodia its satellite'. I suppose this is realpolitik.

In his third section, Mr Lee gives us his values (on the blurb he boasts of having fostered a 'nanny state'), and offers a bliss- ful portrait of his Confucian family net- work; this seems to me to be special pleading, remarkable though his children may be, against charges of nepotism about the speedy rise of his sons to positions of power.

So a man like this, ruling a city state of 640 square kilometres with no natural resources and a few million inhabitants, is not one to tackle thoughtlessly. He claims, `I almost never made the same mistake twice', told the CIA that he would release two of its spies if Washington 'gave a hun- dred million US dollars to the Singapore government for economic development', and is convinced that better educated peo- ple make better breeding stock.

Much of this is appalling but unquestion- ably gripping, like Alan Clark's diaries. What alarms a reviewer in this vast and egotistical account, however, are the details of Mr Lee's victories over journalists and journals which his courts declared had libelled him. His principle has always been `to confront directly those who accuse me of corruption and misusing the power of my office'. He sued and won when a columnist for the International Herald Tri- bune refered to 'dynastic politics in Singa- pore'. The court found this defamatory. Mr Lee's son, one of the best ever mathematics students at Cambridge, as his proud father tells us, rose to high senior rank in the Sin- gapore military, and was elected to parlia- ment in one of those Singapore elections in which opposition candidates rarely win. In 1990, the year Mr Lee resigned as prime minister, his son was appointed deputy prime minister. Some critics (such as the columnist on the International Tribune), Mr Lee says, 'thought this smacked of nepo- tism', but his son, he insists, 'has estab- lished his standing in his own right determined, fast and versatile'.

There are accounts of other successful defamation suits. One of the losers, Christopher Lingle, who had been teaching in the Singapore National University, points out in his own book, Singapore's Authoritarian Capitalism, that in his con- tested column (he provides the text), also in the International Herald Tribune, 'neither his [ Mr Lee's ] name nor that of Singapore was mentioned'. Nonetheless, Mr Lee, who describes the article as 'attacking me', was awarded damages and costs.

So I tiptoe carefully, noting the occa- sional slip. Mr Lee visited Ghana in 1966 where he recalls 'a bright young vice-chan- cellor of his university'. He identifies this man as 'Abraham ... about 30 ... a first in Classics at Oxford'. The vice-chancellor's name was Kwapong, he was 39 in 1966, and his First in Classics was at Cambridge. Mr Lee recounts how in 1993, during a speech at Hong Kong University, with the chancel- lor (and governor) Chris Patten in the chair, he showed how mistaken Mr Patten was in confronting China on the future of democracy in Hong Kong. The governor made no reply, says Mr Lee. Mr Patten remembers the event in his East and West. He claims that Mr Lee referred to the Pat- ten policy in Hong Kong as 'part of an American plan to bring democracy to China — a game in which Hong Kong was a mere pawn. I was the mouthpiece, but the plot was scripted in the United States'. As he listened, Mr Patten writes, he reflect- ed 'on what particular aspect of Singapore- an values covers being so regularly rude and unhelpful to your hosts'. Mr Patten adds that he did not reply in kind but observed to the audience, 'I hoped one day to have the right of reply — in Singa- pore.'

Mr Lee, throughout his long and distin- guished career, met everyone — Mao, Deng, Nehru, Thatcher, several American presidents, and many commonwealth lead- ers and describes them pithily, making clear always that he never kowtowed. He must be the only person who visited Mao in his dying days who doesn't pretend to have been knocked sideways by the audience: 'It was not a substantial conversation . . . what I had seen was a shadow of the man.' (At this point in his book he makes another mistake: Mao did not say, 'The Chinese people have stood up,' in Tiananmen on 1 October, 1949, but on 21 September.) Mr Lee is a staunch anti-communist, thinks communism wrecked China, and has taken care to ally himself with the US (about which he has many reasonable criticisms) because it kept Southeast Asia from falling under either Beijing's or Hanoi's thrall. Deng Xiaoping lectured him at length on Moscow's world-embracing villainy and invited Singapore to join in an anti-Soviet alliance. But Mr Lee knew that South-east Asians wanted to 'unite and isolate the "Chinese Dragon" '. When he told Deng this to his face

his expression and body language registered consternation . . . Abruptly, he asked 'What do you want me to do?'

Mr Lee was amazed. The man he describes as 'the most impressive leader I had met' was the only communist leader he had met `who was prepared to depart from his brief when confronted with reality'.

His reaction to Tiananmen is characteris- tically frank and unpredictable. He 'did not condemn Beijing. I did not regard them as a repressive regime like the Soviet Union'. But he told a Chinese minister a few months after the killings:

Singaporeans could not believe what they had seen — a Chinese government . . . sud- denly turned brutal, using tanks against civil- ians. Singaporeans, especially ethnic Chinese, could not understand this and felt deeply shamed by such an uncivilised act.

Yet within a year Mr Lee, who believes in dealing with the situation as it is (if it can't be settled in a libel court), was telling Pre- mier Li Peng, who had ordered the tanks into the Square, that in the Tiananmen debacle 'it was a great pity that China had lost out in public relations'.

Usually unshakably self-confident, Mr Lee occasionally wavers. A believer in cor- poral punishment — 'We found caning more effective than long prison terms' he admits he left beating their children to his wife: 'Having a violent father turned me against using physical force.' He describes how embarrassed and un-Chinese he felt (he was raised English-speaking) when invited to write with a brush during his China trips. Always 'we felt keenly that we were not one of them'.

Mr Lee never reveals anguish — except when tragedies occur in his family. A huge frog in a tiny pond? Not quite. His view of Singapore, which he says has the same needs as any large country, fits Lee Kuan Yew perfectly: 'As the Chinese saying goes, the sparrow though small has all five organs.'