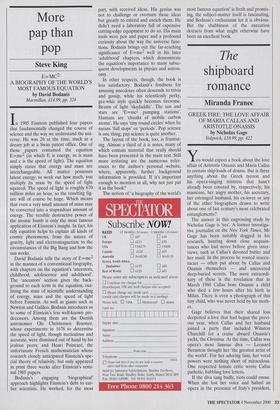 E=MC2: A BIOGRAPHY OF THE WORLD'S MOST FAMOUS EQUATION by David Bodanis Macmillan, £14.99, pp. 324 In 1905 Einstein published four papers that fundamentally changed the course of science and the way we understand the uni- verse. He was 26 at the time, stuck in a dreary job at a Swiss patent office. One of those papers contained the equation E=mc2 (in which E is energy, m is mass and c is the speed of light). The equation simply states that energy and mass are interchangeable. All matter possesses latent energy; to work out how much, you multiply its mass by the speed of light squared. The speed of light is roughly 670 million miles an hour, so the resulting fig- ure will of course be huge. Which means that even a very small amount of mass may be converted into a stupendous amount of energy. The terrible destructive power of the atomic bomb is only the most famous application of Einstein's insight. In fact, his tidy equation helps to explain all kinds of cosmic phenomena, from the nature of gravity, light and electromagnetism to the circumstances of the Big Bang and how the sun works.

David Bodanis tells the story of E=mc2 in the manner of a conventional biography, with chapters on the equation's 'ancestors, childhood, adolescence and adulthood'. The 'ancestors' section gives the back- ground to each term in the equation, out- lining the state of scientific understanding of energy, mass and the speed of light before Einstein. As well as giants such as Newton and Galileo, Bodanis introduces us to some of Einstein's less well-known pre- decessors. Among them are the Danish astronomer Ole Christensen Roemer, whose experiments in 1676 to determine the speed of light, though meticulous and accurate, were dismissed out of hand by his jealous peers; and Henri Poincare, the unfortunate French mathematician whose research closely anticipated Einstein's spe- cial theory of relativity, but only appeared in print three weeks after Einstein's semi- nal 1905 papers.

Bodanis's engaging 'biographical' approach highlights Einstein's debt to ear- lier scientists. He worked, for the most part, with received ideas. His genius was not to challenge or overturn those ideas but greatly to extend and enrich them. He didn't need a laboratory full of expensive cutting-edge equipment to do so. His main tools were pen and paper and a profound curiosity about the way the universe func- tions. Bodanis brings out the far-reaching significance of E=mc2 well in his later `adulthood' chapters, which demonstrate the equation's importance to many subse- quent developments in physics and astron- omy.

In other respects, though, the book is less satisfactory. Bodanis's fondness for amusing anecdotes often descends to trivia and gossip, while his relentlessly perky, gee-whiz style quickly becomes tiresome. Beams of light 'skedaddle'. The sun and stars are `E=mc2 pumping stations'. Humans are 'chunks of mobile carbon atoms'. He says 'tiny round circles' when he means 'full stops' or 'periods'. Pop science is one thing; pap science is quite another.

The layout of the book, too, is frustrat- ing. Almost a third of it is notes, many of which contain material that really should have been presented in the main text. Still more irritating are the numerous refer- ences to the author's personal website, where, apparently, further background information is provided. If it's important enough to mention at all, why not just put it in the book?

The notion of 'a biography of the world's most famous equation' is fresh and promis- ing, the subject-matter itself is fascinating, and Bodanis's enthusiasm for it is obvious. But the shabbiness of the execution detracts from what might otherwise have been an excellent book.