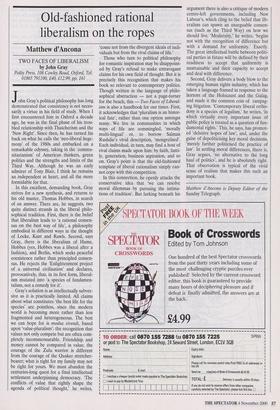 Old-fashioned rational liberalism on the ropes

TWO FACES OF LIBERALISM by John Gray Polity Press, 108 Cowley Road, Oxford, Tel: 01865 791100, £40, £12.99, pp. 161 John Gray's political philosophy has long demonstrated that consistency is not neces- sarily a virtue in his field of study. When I first encountered him in Oxford a decade ago, he was in the final phase of his trou- bled relationship with Thatcherism and the `New Right'. Since then, he has turned his back on what he calls the `neo-liberal hege- mony' of the 1980s and embarked on a remarkable odyssey, taking in the `commu- nitarianism' of American thinkers, green politics and the strengths and limits of the Third Way. Although he was an early admirer of Tony Blair, I think he remains an independent at heart, and all the more formidable for that.

In this excellent, demanding book, Gray strives for a new synthesis, and returns to his old master, Thomas Hobbes, in search of an answer. There are, he suggests, two quite distinct strands in the liberal philo- sophical tradition. First, there is the belief that liberalism leads to 'a rational consen- sus on the best way of life', a philosophy embodied in different ways in the thought of Locke, Kant and Rawls. Second, says Gray, there is the liberalism of Hume, Hobbes (yes, Hobbes was a liberal after a fashion), and Berlin, which seeks peaceful coexistence rather than principled consen- sus. He rejects the 'Enlightenment project of a universal civilisation' and declares, provocatively, that, in its first form, liberal- ism mutated into 'a species of fundamen- talism, not a remedy for it'.

Gray's solution is as intellectually subver- sive as it is practically limited. All claims about what constitutes 'the best life for the species' are pointless, since the modern world is becoming more rather than less fragmented and heterogeneous. The best we can hope for is modus vivendi, based upon 'value-pluralism': the recognition that values not only compete but are often com- pletely incommensurable. Friendship and money cannot be compared in value; the courage of the Zulu warrior is different from the courage of the Quaker stretcher- bearer; what is right for my family may not be right for yours. We must abandon the centuries-long quest for a final intellectual settlement underpinning democracy. 'The conflicts of value that rightly shape the agenda of political thought,' he writes, `come not from the divergent ideals of indi- viduals but from the rival claims of life.'

Those who turn to political philosophy for romantic inspiration may be disappoint- ed by Gray's refusal to make extravagant claims for his own field of thought. But it is precisely this recognition that makes his book so relevant to contemporary politics. Though written in the language of philo- sophical abstraction — not a page-turner for the beach, this — Two Faces of Liberal- ism is also a handbook for our times. First, it acknowledges that 'pluralism is an histor- ical fate', rather than one option amongst many.. We live in communities in which ways of life are commingled, 'morally multi-lingual' or, to borrow Salman Rushdie's vivid description, 'mongrelised'. Each individual, in turn, may find a host of rival claims made upon him: by faith, fami- ly, generation, business aspiration, and so on. Gray's point is that the old-fashioned template of liberal rationalism simply can- not cope with this competition.

In this connection, he openly attacks the conservative idea that 'we can resolve moral dilemmas by pursuing the intima- tions of tradition'. But lurking beneath his argument there is also a critique of modern centre-left governments, including New Labour's, which cling to the belief that lib- eralism can spawn an unarguable consen- sus (such as the Third Way) on how we should live. 'Modernity,' he writes, 'begins not with the recognition of difference but with a demand for uniformity.' Exactly. The great intellectual battle between politi- cal parties in future will be defined by their readiness to accept that uniformity is unattainable and their capacity to accept and deal with difference.

Second, Gray delivers a body blow to the emerging human rights industry, which has taken a language framed in response to the horrors of the Holocaust and the Gulag, and made it the common coin of rampag- ing litigation. 'Contemporary liberal ortho- doxy is a species of legalism,' he writes, 'in which virtually every important issue of public policy is treated as a question of fun- damental rights.' This, he says, has promot- ed 'delusive hopes of law', and, under the guise of depoliticising key moral decisions, `merely further politicised the practice of law'. In settling moral differences, there is, Gray argues, 'no alternative to the long haul of politics', and he is absolutely right. That observation is typical of the vivid sense of realism that makes this such an important book.

Matthew d'Ancona is Deputy Editor of the Sunday Telegraph.