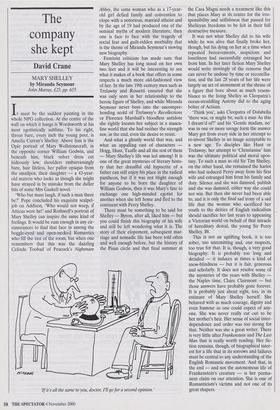 The company she kept

MARY SHELLEY by Miranda Seymour John Murray, £25, pp. 655 It must be the saddest painting in the whole NPG collection. At the centre of the wall on which it hangs is Wordsworth at his most egotistically sublime. To his right, throat bare, every inch the young poet, is Amelia Curran's Shelley. Above him is the Opie portrait of Mary Wollstonecraft, in the opposite corner William Godwin, and beneath him, black velvet dress cut hideously low, shoulders embarrassingly bare, hair lifeless, her pallor opaque from the smallpox, their daughter — a 43-year- old matron who looks as though she might have strayed in by mistake from the duller bits of some Mrs Gaskell novel.

`Who but must laugh, if such a man there be?' Pope concluded his exquisite scalpel- job on Addison, 'Who would not weep, if Atticus were he!' and Rothwell's portrait of Mary Shelley can inspire the same kind of feelings. It would be rum enough in any cir- cumstances to find that face in among the boggle-eyed and open-necked Romantics who fill the rest of the room, but when one remembers that this was the dazzling Celinda Toobad of Peacock's Nightmare Abbey, the same woman who as a 17-year- old girl defied family and convention to elope with a notorious, married atheist and by the age of 19 had produced one of the seminal myths of modern literature, then one is face to face with the tragedy of social fear and guilt-ridden morbidity that is the theme of Miranda Seymour's moving new biography.

Feminist criticism has made sure that Mary Shelley has long stood on her own two feet and it will be interesting to see what it makes of a book that offers in some respects a much more old-fashioned view of her. In the late 19th century men such as Trelawny and Rossetti ensured that she was only seen in her relationship to the heroic figure of Shelley, and while Miranda Seymour never buys into the uncompre- hending scold of Trelawny's Recollections or Florence Marshall's bloodless antidote she rightly locates her subject in a mascu- line world that she had neither the strength nor, in the end, even the desire to resist.

And what a ghastly world that was, and what an appalling cast of characters Hogg, Hunt, Taaffe and all the rest of them — Mary Shelley's life was led among! It is one of the great mysteries of literary histo- ry that her dreadful old hypocrite of a father can still enjoy his place in the radical pantheon, but if it was not blight enough for anyone to be born the daughter of William Godwin, then it was Mary's fate to exchange one high-minded egotist for another when she left home and fled to the continent with Percy Shelley.

There must be something to be said for Shelley — Byron, after all, liked him — but you could finish this biography of his wife and still be left wondering what it is. The story of their elopement, subsequent mar- riage and nomadic life has been told often and well enough before, but the history of the Pisan circle and that final summer at the Casa Magni needs a treatment like this that places Mary at its centre for the irre- sponsibility and selfishness that passed for Shelleyan freedoms to be felt in their full destructive measure.

It was not what Shelley did to his wife while he was alive that finally broke her, though, but his dying on her at a time when repeated bereavements, suspicions and loneliness had successfully estranged her from him. In her later fiction Mary Shelley would write movingly of the remorse that can never be undone by time or reconcilia- tion, and the last 28 years of her life were largely an act of atonement at the shrine of a figure that bore about as much resem- blance to the living Shelley as Cleopatra's ocean-straddling Antony did to the aging bolter of Actium.

`Think you', asks Cleopatra of Dolabella `there was, or might be, such a man As this I dream'd of?' and his 'Gentle madam, no' was in one or more savage form the answer Mary got from every side in her attempt to re-invent Shelley in an image acceptable to a new age. To disciples like Hunt or Trelawny, her attempt to 'Christianise' him was the ultimate political and moral apos- tasy. To such a man as old Sir Tim. Shelley, on the other hand, she remained the harlot who had seduced Percy away from his first wife and estranged him from his family and duty. Silence and she was damned, publish and she was damned, either way she could not win. But then she never had been able to, and it is only the final sad irony of a sad life that the woman who sacrificed her youth to the deities of English radicalism should sacrifice her last years to appeasing a Victorian world on behalf of that miracle of hereditary denial, the young Sir Percy Shelley, Bt.

This is not an uplifting book, it is too sober, too unremitting and, one suspects, too true for that. It is, though, a very good biography. It is probably too long and detailed — it induces at times a kind of snow-blindness — but it is fair, generous and scholarly. It does not resolve some of the mysteries of the years with Shelley the Naples time, Claire Clairmont — but those answers have probably gone forever. It is probably just about right, too, in its estimate of Mary Shelley herself. She behaved with as much courage, dignity and even humour as lane could expect of any- one. She was never really cut out to be her mother's heir. Her sense of social inter- dependence and order was too strong for that. Neither was she a great writer. There is very little after Frankenstein and The Last Man that is really worth reading. Her fic- tion remains, though, of biographical inter- est for a life that in its sorrows and failures must be central to any understanding of the English Romantic movement. And that, in the end — and not the autonomous life of Frankenstein's creature — is her perma- nent claim on our attention. She is one of Romanticism's victims and not one of its great shapers.