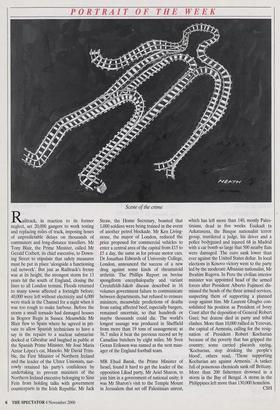 Railtrack, in reaction to its former neglect, set 20,000 gangers to work testing and replacing miles of track, imposing hours of unpredictable delays on thousands of commuters and long-distance travellers. Mr Tony Blair, the Prime Minister, called Mr Gerald Corbett, its chief executive, to Down- ing Street to stipulate that safety measures must be put in place 'alongside a functioning rail network'. But just as Railtrack's frenzy was at its height, the strongest storm for 13 years hit the south of England, closing the lines to all London termini. Floods returned to many towns affected a fortnight before; 40,000 were left without electricity and 6,000 were stuck in the Channel for a night when it was too rough to make harbour. Before the storm a small tornado had damaged houses in Bognor Regis in Sussex. Meanwhile Mr Blair flew to Spain where he agreed in pri- vate to allow Spanish technicians to have a say in the repairs to a nuclear submarine docked at Gibraltar and laughed in public at the Spanish Prime Minister, Mr Jose Maria Aznar Lopez's cat, Manolo. Mr David Trim- ble, the First Minister of Northern Ireland and the leader of the Ulster Unionists, nar- rowly retained his party's confidence by undertaking to prevent ministers of the Northern Ireland executive belonging to Sinn Fein from holding talks with government counterparts in the Irish Republic. Mr Jack Straw, the Home Secretary, boasted that 1,000 soldiers were being trained in the event of another petrol blockade. Mr Ken Living- stone, the mayor of London, reduced the price proposed for commercial vehicles to enter a central area of the capital from £15 to £5 a day, the same as for private motor cars. Dr Jonathan Edwards of University College, London, announced the success of a new drug against some kinds of rheumatoid arthritis. The Phillips Report on bovine spongiform encephalopathy and variant Creutzfeldt-Jakob disease described in 16 volumes government failure to communicate between departments, but refused to censure ministers; meanwhile predictions of deaths from eating affected beef, especially burgers, remained uncertain, so that hundreds or maybe thousands could die. The world's longest sausage was produced in Sheffield from more than 19 tons of sausagemeat; at 36.7 miles it beat the previous record set by Canadian butchers by eight miles. Mr Sven Goran Eriksson was named as the next man- ager of the England football team.

MR Ehud Barak, the Prime Minister of Israel, found it hard to get the leader of the opposition Likud party, Mr Ariel Sharon, to join him in a government of national unity; it was Mr Sharon's visit to the Temple Mount in Jerusalem that set off Palestinian unrest, which has left more than 140, mostly Pales- tinians, dead in five weeks. Euzkadi to Azkatasuna, the Basque nationalist terror group, murdered a judge, his driver and a police bodyguard and injured 68 in Madrid with a car bomb so large that 500 nearby flats were damaged. The euro sank lower than ever against the United States dollar. In local elections in Kosovo victory went to the party led by the moderate Albanian nationalist, Mr Ibrahim Rugova. In Peru the civilian interior minister was appointed head of the armed forces after President Alberto Fujimori dis- missed the heads of the three armed services, suspecting them of supporting a planned coup against him. Mr Laurent Gbagbo con- solidated his position as President of Ivory Coast after the deposition of General Robert Guei; but dozens died in party and tribal clashes. More than 10,000 rallied in Yerevan, the capital of Armenia, calling for the resig- nation of President Robert Kocharian because of the poverty that has gripped the country; some carried placards saying, ‘Kocharian, stop drinking the people's blood', others read, 'Those supporting Kocharian are against Armenia.' A tanker full of poisonous chemicals sank off Brittany. More than 200 fishermen drowned in a storm in the Bay of Bengal. A storm in the Philippines left more than 130,000 homeless.