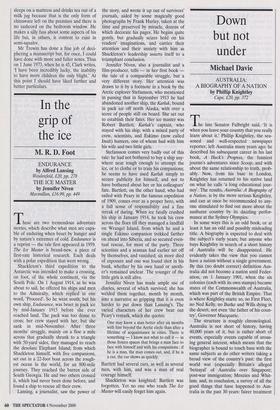 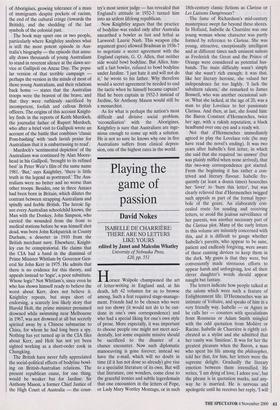 Down but not under

AUSTRALIA: A BIOGRAPHY OF A NATION by Philip Knightley Cape, 120, pp. 372 he late Senator Fulbright said, 'It is when you leave your country that you really learn about it.' Phillip Knightley, the sea- soned and well-respected newspaper reporter, left Australia many years ago; he described his subsequent career in his last book, A Hack's Progress, the funniest journo's adventures since Scoop, and with about the same relationship to truth, prob- ably. Now, from his base in London, Knightley has returned to his native land on what he calls 'a long educational jour- ney'. The results, Australia: A Biography of a Nation, is by the more serious Knightley, and can at once be recommended to any- one stimulated to find out more about the sunburnt country by its dazzling perfor- mance at the Sydney Olympics.

In some ways this is an odd book, or at least it has an odd and possibly misleading title. A biography is expected to deal with the subject's early years; but anyone who buys Knightley in search of a short history of Australia will be disappointed. He evidently takes the view that you cannot have a nation without a single government. By this (no doubt correct) definition Aus- tralia did not become a nation until Feder- ation, on 1 January 1901, when the six colonies (each with its own stamps) became states of the Commonwealth of Australia, which was part of the British Empire. That is where Knightley starts: so, no First Fleet, no Ned Kelly, no Burke and Wills dying in the desert, not even 'the father of his coun- try', Governor Macquarie.

The structure is roughly chronological. Australia is not short of history, having 40,000 years of it, but is rather short of events, especially events capable of arous- ing general interest, which means that the biographer is bound to touch base with the same subjects as do other writers taking a broad view of the country's past: the first world war (especially Britain's alleged `betrayal' of Australia over Singapore; post-war immigration; Menzies and Whit- lam; and, in conclusion, a survey of all the good things that have happened to Aus- tralia in the past 30 years: fairer treatment of Aborigines, growing tolerance of a mass of immigrants despite pockets of racism, the end of the cultural cringe (towards the British), and the shedding of the last symbols of the colonial past.

The book may upset one or two people, particularly where Knightley analyses what is still the most potent episode in Aus- tralia's biography — the episode that annu- ally draws thousands of young Australians to stand in reverent silence at the dawn ser- vice at Gallipoli on Anzac Day. The popu- lar version of that terrible campaign perhaps the version in the minds of most of those young Australians, and their relations back home — states that the Australian troops were the bravest of the brave, and that they were ruthlessly sacrificed by incompetent, foolish and callous British officers. The origins of this account Knight- ley finds in the reports of Keith Murdoch, the journalist father of Rupert Murdoch, who after a brief visit to Gallipoli wrote an account of the battle that combines 'classic Porn-bashing' with 'such lavish praise for Australians that it is embarrassing to read'.

Murdoch's 'sentimental depiction' of the Australians was continued by Alan Moore- head in his Gallipoli, 'brought to its refined best' in Peter Weir's film of the same name 1981. 'But,' says Knightley, 'there is little truth in the legend as portrayed.' The Aus- tralians were no better and no worse than other troops. Besides, one in three Anzacs had been born in Britain, which dilutes the contrast between strapping Australians and spindly and feeble British. The heroic fig- ure every Australian schoolchild knows, the Man with the Donkey, John Simpson, who carried the wounded from the front to medical stations before he was himself shot dead, was born John Kirkpatrick in County Durham, a deserter in 1910 from the British merchant navy. Elsewhere, Knight- ley can be conspiratorial. He claims that the CIA had a hand in the dismissal of Prime Minister Whitlam by Governor Gen- eral Sir John Kerr in 1975. He admits that there is no evidence for this theory, and appeals instead to 'logic', a poor substitute. Whose logic? Not Whitlam's, since even he who has shown himself ready to believe the worst about Kerr, does not believe it. Knightley repeats, but stops short of endorsing, a scarcely less likely story that Harold Holt, the prime minister presumed drowned while swimming near Melbourne in 1967, was not drowned at all but secretly spirited away by a Chinese submarine to China, for whom he had long been a spy. Nothing has yet turned up in the CIA files about Kerr, and Holt has not yet been sighted working as a short-order cook in Chungking.

The British have never fully appreciated the social-political effects of bodyline bowl- ing on British-Australian relations. The present republican cause, for one thing, would be weaker but for Jardine: Sir Anthony Mason, a former Chief Justice of the High Court of Australia — the coun- try's most senior judge — has revealed that England's attitude in 1932-3 turned him into an ardent lifelong republican.

Now Knightley argues that the practice of bodyline was ended only after Australia unearthed a bowler as fast and lethal as Larwood: Laurie Nash. This weapon (the argument goes) allowed Bradman in 1936-7 to negotiate a secret agreement with the England captain, G. 0. Allen, that neither side would bowl bodyline. But Allen, him- self a fast bowler, refused to bowl bodyline under Jardine. 'I just hate it and will not do it,' he wrote to his father. Why therefore would a secret agreement be needed to end the tactic when he himself became captain? Had he been captain in 1932-3 instead of Jardine, Sir Anthony Mason would still be a monarchist.

As for what is perhaps the nation's most difficult and divisive social problem, `reconciliation' with the Aborigines, Knightley is sure that Australians are inge- nious enough to come up with a solution. He is not so sure he knows why one in five Australians suffers from clinical depres- sion, one of the highest rates in the world.