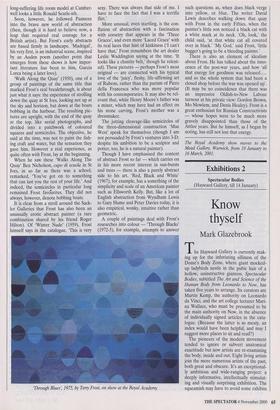 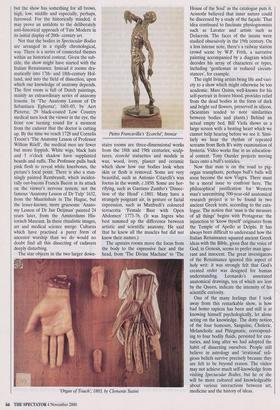 The Hayward Gallery is currently mak- ing up for the infuriating silliness of the Dome's Body Zone, where giant mocked- up ladybirds nestle in the pubic hair of a hollow, uninstructive giantess. Spectacular Bodies, subtitled The Art and Science of the Human Body from Leonardo to Now, has taken five years to arrange. Its curators are Martin Kettp, the authority on Leonardo da Vinci, and the art college lecturer Mari- na Wallace, who must be presumed to be the main authority on Now, in the absence of individually signed articles in the cata- logue. (Because the latter is so meaty, an index would have been helpful, and may I suggest more places to sit and read?) The pioneers of the modern movement tended to ignore or subvert anatomical exactitude but now artists are re-examining the body, inside and out. Eight living artists join the more numerous artists of the past, both great and obscure. It's an exceptional- ly ambitious and wide-ranging project: a deeply informative, intellectually stimulat- ing and visually surprising exhibition. The squeamish may have to avoid some exhibits but the show has something for all brows, high, low, middle and especially, perhaps, furrowed. For the historically minded, it may prove an antidote to the deliberately anti-historical approach of Tate Modern in its initial display of 20th- century art.

Not that the bodies in Spectacular Bodies are arranged in a rigidly chronological, way. There is a series of connected themes within an historical context. Given the sub- title, the show might have started with the Italian Renaissance. Instead it zooms dra- matically into 17th- and 18th-century Hol- land, and into the field of dissection, upon which our knowledge of anatomy depends. The first room is full of Dutch paintings, mainly an extraordinary series of anatomy lessons. In 'The Anatomy Lesson of Dr Sebastiaen Egbertsz', 1601-03, by Aert Pietersz, 29 black-coated Low Country medical men look the viewer in the eye, the front row turning round for a moment from the cadaver that the doctor is cutting up. By the time we reach 1728 and Cornelis Troost's 'The Anatomy Lesson of Professor Willem Wien', the medical men are fewer but more foppish. White wigs, black hats and 5 o'clock shadow have supplanted beards and ruffs. The Professor pulls back pink flesh to reveal white kneebones, the picture's focal point. There is also a stun- ningly painted Rembrandt, which inciden- tally out-bacons Francis Bacon in its attack on the viewer's nervous system; not the famous 'Anatomy Lesson of Dr Tulp' 1632, from the Mauritshuis in The Hague, but the lesser-known, more gruesome 'Anato- my Lesson of Dr Jan Deijman' painted 24 years later, from the Amsterdams His- torisch Museum. In these ritualistic images, art and medical science merge. Cultures which have practised a purer form of ancestor worship than we do would no doubt find all this dissecting of cadavers deeply disturbing.

The star objects in the two larger down- stairs rooms are three-dimensional works from the 18th and 19th centuries; sculp- tures, ecorche statuettes and models in wax, wood, ivory, plaster and ceramic which show how our bodies look when skin or flesh is removed. Some are very beautiful, such as Antonio Citarelli's wax foetus in the womb, c.1850. Some are hor- rifying, such as Gaetano Zumbo's 'Dissec- tion of the Head' c.1801. Many have a strangely poignant air, in gesture or facial expression, such as Manfredi's coloured terracotta 'Female Bust with Open Abdomen' 1773-76. (It was Ingres who best summed up the difference between artistic and scientific anatomy. He said that he knew all the muscles but did not know their names.) The upstairs rooms move the focus from the body to the expressive face and the head, from 'The Divine Machine' to 'The House of the Soul' as the catalogue puts it. Aristotle believed that inner nature could be discerned by a study of the fagade. That idea continued to fascinate physiognomists such as Lavater and artists such as Delacroix. The faces of the insane were studied obsessively in the 19th century. On a less intense note, there's a railway station crowd scene by W.P. Frith, a narrative painting accompanied by a diagram which decodes his array of characters or types, including 'gentleman in reduced circum- stances', for example.

The eight living artists bring life and vari- ety to a show which might otherwise be too academic. Marc Quinn, well-known for his self-portrait in frozen blood, provides relief from the dead bodies in the form of dark and bright red flowers, preserved in silicon. (Scientists tended to note similarities between bodies and plants.) Behind an actual empty bed, Bill Viola shows us a large screen with a beating heart which we cannot help hearing before we see it. Simi- larly we hear the rhythm of repeated screams from Beth B's witty examination of hysteria. Video works fine in an education- al context. Tony Oursler projects moving faces onto a bull's testicles.

Now that man is on the road to pig- organ transplants, perhaps bull's balls will soon become the new Viagra. There must be a moral issue to confront here. The philosophical justification for Western man's unremitting 500-year-old anatomical research project is to be found in two ancient Greek texts, according to the cata- logue. The notion that 'man is the measure of all things' begins with Protagoras: the injunction to 'know thyself originates from the Temple of Apollo at Delphi. It has always been difficult to understand how the Italian Renaissance squared ancient Greek ideas with the Bible, given that the voice of God, in Genesis, seems to prefer man igno- rant and innocent. The great investigators of the Renaissance ignored this aspect of holy writ: it was strongly felt that God's created order was designed for human understanding. Leonardo's annotated anatomical drawings, ten of which are lent by the Queen, indicate the intensity of his scientific curiosity.

One of the many feelings that I took away from this remarkable show, is how bad homo sapiens has been and still is at knowing himself psychologically, let alone acting on the knowledge. The dotty notion of the four humours, Sanguine, Choleric, Melancholic and Phlegmatic, correspond- ing to four bodily fluids, persisted for cen- turies, and long after we had adopted the habit of dissecting ourselves. People still believe in astrology and 'irrational' reli- gious beliefs survive precisely because they are felt to be beyond reason. The visitor may not achieve much self-knowledge from visiting Spectacular Bodies, but he or she will be more cultured and knowledgeable about various interactions between art, medicine and the history of ideas.