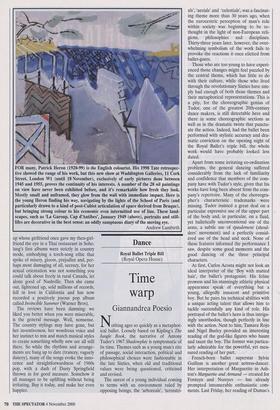 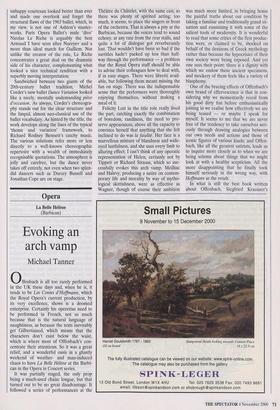 Nothing ages so quickly as a metaphor- ical ballet. Loosely based on Kipling's The Jungle Book, the narrative of Antony Tudor's 1967 Shadowplay is symptomatic of its time. Themes such as a young man's rite of passage, social interaction, political and philosophical choices were fashionable in the late Sixties, when old and traditional values were being questioned, criticised and revised.

The unrest of a young individual coming to terms with an environment ruled by opposing beings, the 'arboreals', 'terrestri- als', 'aerials' and 'celestials', was a fascinat- ing theme more than 30 years ago, when the eurocentric perception of man's role within society was beginning to be re- thought in the light of non-European reli- gions, philosophies and disciplines. Thirty-three years later, however, the over- whelming symbolism of the work fails to provoke the reactions it once elicited from ballet-goers.

Those who are too young to have experi- enced those changes might feel puzzled by the central theme, which has little to do with their culture, while those who lived through the revolutionary Sixties have sim- ply had enough of both those themes and their metaphorical representations. This is a pity, for the choreographic genius of Tudor, one of the greatest 20th-century dance makers, is still detectable here and there in some choreographic sections as well as in the dramatic twists that punctu- ate the action. Indeed, had the ballet been performed with stylistic accuracy and dra- matic conviction on the opening night of the Royal Ballet's triple bill, the whole work would have probably looked less dated.

Apart from some irritating co-ordination problems, the general dancing suffered considerably from the lack of familiarity and confidence that members of the com- pany have with Tudor's style, given that his works have long been absent from the com- pany's repertoire. Many of the choreogra- pher's characteristic trademarks were missing. Tudor insisted a great deal on a particular expressive use of the upper part of the body and, in particular, on a fluid, yet balletically unconventional use of the arms, a subtle use of epaulement (shoul- ders' movement) and a perfectly consid- ered use of the head and neck. None of these features informed the performance I saw, despite some good moments and the good dancing of the three principal characters.

At first, Carlos Acosta might not look an ideal interpreter of the 'Boy with matted hair', the ballet's protagonist. His feline prowess and his stunningly athletic physical appearance speak of everything but a young, allegedly innocent and primitive boy. But he pairs his technical abilities with a unique acting talent that allows him to tackle successfully any kind of role. His portrayal of the ballet's hero is thus intrigu- ingly unorthodox, though perfectly in line with the action. Next to him, Tamara Rojo and Nigel Burley provided an interesting reading of the god-like figures who haunt and taunt the boy. The former was particu- larly admirable for the powerful, yet mea- sured reading of her part.

French-born ballet superstar Sylvie Guillem is another great actress-dancer. Her interpretation of Marguerite in Ash- ton's Marguerite and Armand — created for Fonteyn and Nureyev — has already prompted innumerable enthusiastic com- ments. Last Friday, her reading of Dumas's unhappy courtesan looked better than ever and made one overlook and forget the structural flaws of the 1963 ballet, which, in my view, is not one of Ashton's master- works. Paris Opera Ballet's male `divo' Nicolas Le Riche is arguably the best Armand I have seen after Nureyev and a more than ideal match for Guillem. Not unlike the creator of the role, Le Riche concentrates a great deal on the dramatic side of his character, complementing what looked a nice technical rendition with a superbly moving interpretation.

Sandwiched between two giants of the 20th-century ballet tradition, Michel Corder's new ballet Dance Variation looked like a nicely, mentally undemanding piece d'oecasion. As always, Corder's choreogra- phy stands out for the clear structure and the limpid, almost neo-classical use of the ballet vocabulary. As hinted by the title, the work develops along the lines of the typical `theme and variation' framework, to Richard Rodney Bennett's catchy music. The various solutions refer more or less directly to a well-known choreographic repertoire with a wealth of immediately recognisable quotations. The atmosphere is jolly and carefree, but the dance never takes off entirely, not even when two splen- did dancers such as Darcey Bussell and Jonathan Cope are on stage.