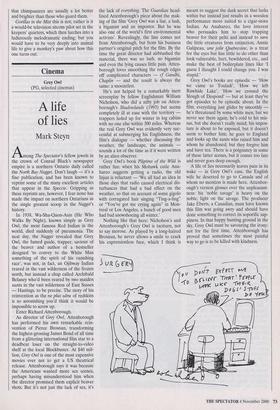 A life of lies

Among The Spectator's fellow jewels in the crown of Conrad Black's newspaper empire is a northern Ontario daily called the North Bay Nugget. Don't laugh — it's a fine publication, and has been known to reprint some of the many excellent articles that appear in the Speccie. Gripping as these reprints are, however, I fear none has made the impact on northern Ontarians as the single greatest scoop in the Nugget's history.

In 1938, Wa-Sha-Quon-Asin (He Who Walks By Night), known simply as Grey Owl, the most famous Red Indian in the world, died suddenly of pneumonia. The next day, the Nugget revealed that Grey Owl, the famed guide, trapper, saviour of the beaver and author of a bestseller designed 'to convey to the White Man something of the spirit of his vanishing race', was not, in fact, an Ojibway Indian reared in the vast wilderness of the frozen north, but instead a chap called Archibald Belaney who'd been reared by two maiden aunts in the vast wilderness of East Sussex — Hastings, to be precise. The story of his reinvention as the ne plus ultra of redskins is so astonishing you'd think it would be impossible to screw up.

As director of Grey Owl, Attenborough has performed his own remarkable rein- vention of Pierce Brosnan, transforming the highest-grossing James Bond of all time from a glittering international film star to a deadbeat loser on the straight-to-video shelf at the local Blockbuster. At $40 mil- lion, Grey Owl is one of the most expensive movies ever not to get a US theatrical release. Attenborough says it was because the Americans wanted more sex scenes, perhaps having misunderstood him when the director promised them explicit beaver shots. But it's not just the lack of sex, it's the lack of everything. The Guardian head- lined Attenborough's piece about the mak- ing of the film 'Grey Owl was a liar, a lush, a bigamist and an impostor. But he was also one of the world's first environmental activists'. Revealingly, the line comes not from Attenborough, but from his business partner's original pitch for the film. By the time the great director had airbrushed the material, there was no lush, no bigamist and even the lying causes little pain. Atten- borough loves smoothing the rough edges off complicated characters — cf Gandhi, Chaplin — and the result is always the same: a snoozefest.

He's not helped by a remarkably inert screenplay by fellow Englishman William Nicholson, who did a nifty job on Atten- borough's Shadowlands (1993) but seems completely ill at ease with the territory trappers holed up for winter in log cabins with no one else within 300 miles. Whereas the real Grey Owl was evidently very suc- cessful at submerging his Englishness, the film's dialogue — whether discussing the weather, the landscape, the animals sounds a lot of the time as if it were written by an alien observer.

Grey Owl's book Pilgrims of the Wild is rather fun: when his Mohawk cutie Ana- hareo suggests getting a radio, the old Injun is reluctant — 'We all had an idea in those days that radio caused electrical dis- turbances that had a bad effect on the weather, so that on account of some gigolo with corrugated hair singing "Ting-a-ling" or "You've got me crying again" in Mon- treal or Los Angeles, a bunch of good men had bad snowshoeing all winter.'

Nothing like that here: Nicholson's and Attenborough's Grey Owl is taciturn, not to say morose. As played by a long-haired Brosnan, he never allows a smile to crack his expressionless face, which I think is meant to suggest the dark secret that lurks within but instead just results in a wooden performance more suited to a cigar-store Indian. As Anahareo, the love interest who persuades him to stop trapping beaver for their pelts and instead to save the little creatures from extinction, Annie Galipeau, une jolie Quebecoise, is a treat for the eyes but has little to do other than look vulnerable, hurt, bewildered, etc., and make the best of boilerplate lines like 'I guess I thought I could change you. I was stupid.'

Grey Owl's books are episodic — 'How we came to Touladi', 'How we left Rawhide Lake', 'How we crossed the Slough of Despond' — but at least they've got episodes to be episodic about. In the film, everything just glides by smoothly he's threatened by some white men, but we never see them again; he's cold to his mis- sus, but she doesn't really mind; his impos- ture is about to be exposed, but it doesn't seem to bother him; he goes to England and looks up the aunts who raised him and whom he abandoned, but they forgive him and have tea. There is a poignancy in some of these latter scenes, but it comes too late and never goes deep enough.

A life of lies necessarily leaves pain in its wake — in Grey Owl's case, the English wife he deserted to go to Canada and of whom no mention is made here. Attenbor- ough's version glosses over the unpleasant- ness: his 'noble savage' is heavy on the noble, light on the savage. The producer Jake Eberts, a Canadian, must have known this film was going awry and should have done something to correct its soporific sap- piness. In that happy hunting ground in the sky, Grey Owl must be savouring the irony: not for the first time, Attenborough has proved that sometimes the most painful way to go is to be killed with kindness.