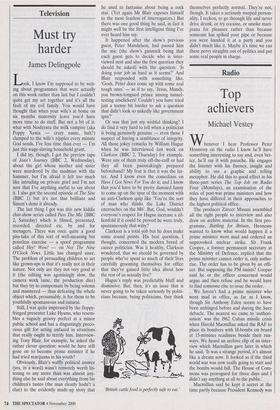 Look, I know I'm supposed to be writ- ing about programmes that were actually on this week rather than last but I couldn't quite get my act together and it's all the fault of my evil family. You would have thought that when your wife's at home on six months maternity leave you'd have more time to do stuff. But not a bit of it: what with Nosferatu the milk vampire (aka Poppy Xenia — crazy name, huh?) clamped to the wife's nipples every minute God sends, I've less time than ever — I'm just this wage-slaving household grunt.

I did try, though. I got the preview tape of Josie's Journey (BBC 2, Wednesday), about the girl whose mother and sister were murdered by the madman with the hammer, but I'm afraid it felt too much like intruding on private grief and I'm not sure that I've anything useful to say about it. I also got the second episode of The Sins (BBC 1) but it's not that brilliant and Simon's done it already.

The last thing I got was this new kiddie chat-show series called Pass The Mic (BBC 2, Saturday) which is filmed, presented, recorded, directed etc. by and for teenagers. There was once quite a good piss-take of this sort of well-meaning but pointless exercise — a spoof programme called Hey! Wow! — on Not The Nine O'Clock News. Little has changed since. The problem of persuading children to act like grown-ups is that it's really not in their nature. Not only are they not very good at it (the editing was agonisingly slow, the camera work lame, the production dire) but they try to compensate by being solemn and mannered — thus defeating the whole object which, presumably, is for them to be youthfully spontaneous and natural.

Still, I was quite impressed by the floppy- fringed presenter Luke Hyams, who resem- bles a vaguely groovy prefect at a minor public school and has a disgustingly preco- cious gift for acting unfazed in situations that really ought to terrify him. Interview- ing Tony Blair, for example, he asked the rather clever question: would he have still gone on to become prime minister if he had tried marijuana in his youth?

Obviously, Blair's waffly political answer (yes, in a word) wasn't remotely worth lis- tening to any more than was almost any- thing else he said about everything from his children's tastes (the man clearly hadn't a clue) to the evidently made-up story that he used to fantasise about being a rock star. (Yet again Mr Blair exposes himself to the most fearless of interrogators.) But there was one good thing he said, in fact it might well be the first intelligent thing I've ever heard him say.

It happened after the show's previous guest, Peter Mandelson, had passed him the mic (the show's gimmick being that each guest gets to decide who is inter- viewed next and also the first question they should be asked) with the question: 'Is doing your job as hard as it seems?' And Blair responded with something like, `Gosh, Peter does come up with some real tough ones' — as if to say, 'Jesus, Mandy, you brown-tongued prince among tunnel- testing arselickers! Couldn't you have tried just a teensy bit harder to ask a question that didn't look so nakedly like government spin?'

Or was that just my wishful thinking? I do find it very hard to tell when a politician is being genuinely genuine — even those I suspect of having a semblance of integrity. All those jokey remarks by William Hague when he was interviewed last week on Clarkson (BBC 2, Thursday) for example. Were any of them truly off-the-cuff or had they all been painstakingly prepared beforehand? My fear is that it was the lat- ter. And I know even the comedians on Have I Got News For You do it; and I know that you'd have to be pretty damned funny to come up on the spur of the moment with an anti-Clarkson quip like 'You're the sort of man who thinks the Lake District encroaches on the M6'. But, God, wouldn't everyone's respect for Hague increase a zil- lionfold if it could be proved he were truly, spontaneously that witty?

Clarkson is a total yob but he does make some sound points. His best question, I thought, concerned the modern breed of career politician. Was it healthy, Clarkson wondered, that we should be governed by people who've spent so much of their lives carefully grooming themselves for office that they've gained little idea about how the rest of us actually live?

Hague's reply was predictably bluff and dismissive. But, then, it's an issue that is never going to be taken seriously by politi- cians because, being politicians, they think themselves perfectly normal. They're not, though. It takes a seriously warped person- ality, I reckon, to go through life and never drive drunk, or try cocaine, or smoke mari- juana for pleasure rather than because someone has spiked your pipe or because you were handed it at a party and you didn't much like it. Maybe it's time we ran these pervy straights out of politics and put some real people in charge.