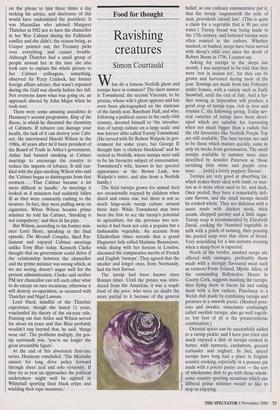 What do a famous Norfolk ghost and turnips have in common? The short answer is Townshend, the second Viscount, to be precise, whose wife's ghost appears and has even been photographed on the staircase of the family seat, Raynham Hall, and who, following a political career in the early-18th century, devoted himself to 'the introduc- tion of turnip culture on a large scale' and was forever after called Turnip Townshend. (He served with Sir Robert Walpole in gov- ernment for some years, but George II thought him 'a choleric blockhead' and he retired to Norfolk, where turnips were said to be his favourite subject of conversation. Townshend's wife, known in her spectral appearance as the Brown Lady, was Walpole's sister, and also from a Norfolk family.) The field turnips grown for animal feed are occasionally enjoyed by children when sliced and eaten raw, but there is not so much large-scale turnip culture around these days. While Townshend may have been the first to see the turnip's potential in agriculture, for the previous two cen- turies it had been not only a popular but a fashionable vegetable. An account from Elizabethan times records that a grand Huguenot lady called Madame Beausejour, while dining with her hostess in London, discussed the comparative merits of French and English `turneps'. They agreed that the smaller and longer ones, from Normandy, had the best flavour.

The turnip had been known since Roman times. Until the potato was intro- duced from the Americas, it was a staple food of the poor, who were no doubt the more partial to it because of the general belief, as one culinary commentator put it, that the turnip `augmenteth the sede of man, provoketh camall lust'. (This is quite a claim for a vegetable that is 90 per cent water.) Turnip bread was being made in the 17th century, and buttered turnips were often roasted in the embers. Whether mashed, or bashed, neeps have been served with sheep's offal ever since the death of Robert Burns in 1796, I cannot say.

Asking for turnips in the shops last month, I was surprised to be told that they were 'not in season yet', for they can be grown and harvested during most of the year. Sowings are made from late February under frames, with a variety such as Early Snowball, until the end of July. And a fur- ther sowing in September will produce a good crop of turnip tops, rich in iron and vitamin C, the following spring. Today sev- eral varieties of turnip have been devel- oped which are suitable for harvesting when not much bigger than a radish; but the old favourites like Norfolk Purple Top are still available. The best turnips are said to be those which mature quickly, some in only six weeks from germination. The small turnips available in summer were once described by Jennifer Paterson as 'those ravishing little white and purple crea- tures . . . [with] a lovely peppery flavour'.

Turnips are very good at absorbing fat, which makes them ideal with lamb, or mut- ton as it more often used to be, and duck. Once peeled, they have a remarkably deli- cate flavour, and the small turnips should be cooked whole. They are delicious with a sauce made with chicken stock, thick cream, chopped parsley and a little sugar. Turnip soup is recommended by Elizabeth David, cooking the blanched vegetable in milk with a pinch of nutmeg, then pouring the puréed soup over thin slices of bread. Very nourishing for a late-autumn evening when a sharp frost is expected.

North of the border, mashed neeps are offered with sausages, preferably those made with a strongly flavoured meat such as venison From Ireland, Myrtle Allen, of the outstanding Ballymaloe House in County Cork, suggests mashing the turnips, then frying them in bacon fat and eating them with a few rashers. Punchnep is a Welsh dish made by combining turnips and potatoes in a smooth puree. (Mashed pota- toes and swedes, sometimes confusingly called swedish turnips, also go well togeth- er, but best of all is the potato/celeriac combination.) Oriental spices can be successfully added to a turnip pickle; and I have just tried and much enjoyed a dish of turnips cooked in butter, with turmeric, cardamom, ground coriander and yoghurt. In fact, spiced turnips have long had a place in English country cooking, especially in a peasant pie made with a potato pastry crust — the sort of wholesome dish to go with those whole- some country sporting occasions which our illiberal prime minister would so like to stop us enjoying.