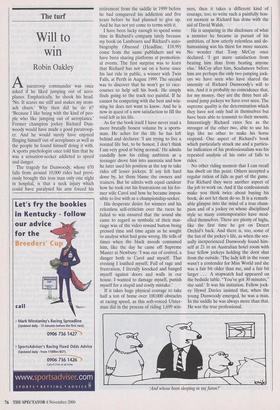 Aparatroop commander was once asked if he liked jumping out of aero- planes. Emphatically, he shook his head. `No. It scares me stiff and makes my stom- ach churn.' Why then did he do it? `Because I like being with the kind of peo- ple who like jumping out of aeroplanes.' Former champion jockey Richard Dun- woody would have made a good paratroop- er. And he would surely have enjoyed flinging himself out of aeroplanes as well as the people he found himself doing it with. A sports psychologist once told him that he was a sensation-seeker addicted to speed and danger.

The tragedy for Dunwoody, whose 670 falls from around 10,000 rides had previ- ously brought this iron man only one night in hospital, is that a neck injury which could have paralysed his arm forced his retirement from the saddle in 1999 before he had conquered his addiction and five years before he had planned to give up. And he has not yet come to terms with it.

I have been lucky enough to spend some time in Richard's company lately because my book on Lambourn and Richard's auto- biography Obsessed (Headline, £18.99) come from the same publishers and we have been sharing platforms at promotion- al events. The first surprise was to learn that Richard has not sat on a horse since his last ride in public, a winner with Twin Falls, at Perth in August 1999. The second was to discover that he won't go to race- courses to help sell his book. He simply finds going to the track too painful. If he cannot be competing with the best and win- ning he does not want to know. And he is now in quest of a new satisfaction to fill the void left in his life.

As for the book itself I have never read a more brutally honest volume by a sports- man. He aches for the life he has left behind and declares: 'I am trying to live a normal life but, to be honest, I don't think I am very good at being normal.' He admits candidly how his riding ambition as a teenager drove him into anorexia and how he later used his position at the top to take rides off lesser jockeys. If any felt hard done by, let them blame the owners and trainers. But he admits with equal candour how he took out his frustrations on his for- mer wife Carol and how he became impos- sible to live with as a championship-seeker.

His desperate desire for winners and his relentless self-criticism over the races he failed to win ensured that the sound she came to regard as symbolic of their mar- riage was of the video rewind button being pressed time and time again as he sought to analyse what had gone wrong. He tells of times when the black moods consumed him, like the day he came off Supreme Master at Newbury: 'I was out of control, a danger both to Carol and myself. That evening I loathed myself. Full of rage and frustration, I literally knocked and banged myself against doors and walls in our house. I wanted to damage myself, punish myself for a stupid and costly mistake.'

If it takes huge physical courage to take half a ton of horse over 100,000 obstacles at racing speed, as this soft-voiced Ulster- man did in the process of riding 1,699 win- ners, then it takes a different kind of courage, too, to write such a painfully hon- est memoir as Richard has done with the aid of David Walsh.

He is unsparing in the disclosure of what a monster he became in pursuit of his ambition, of how utterly relentless and de- humanising was his thirst for more success. No wonder that Tony McCoy once declared, 'I get more satisfaction from beating him than from beating anyone else.' McCoy after him, Scudamore before him are perhaps the only two jumping jock- eys we have seen who have shared the intensity of Richard Dunwoody's will to win. And it is probably no coincidence that, for my money, they are the three best all- round jump jockeys we have ever seen. The supreme quality is the determination which they have not only had in themselves but have been able to transmit to their mounts. Interestingly Richard rates Scu as the stronger of the other two, able to use his legs like no other to make his horse respond. One aspect of Richard's book which particularly struck me and a particu- lar indication of his professionalism was his repeated analysis of his ratio of falls to rides.

No other riding memoir that I can recall has dwelt on this point. Others accepted a regular ration of falls as part of the game. For Richard they were another aspect of the job to work on. And if the confessionals make you think twice about buying his book, do not let them do so. It is a remark- able glimpse into the mind of a true cham- pion and of a jockey on whose disciplined style so many contemporaries have mod- elled themselves. There are plenty of highs, like the first time he got on Desert Orchid's back. And there is, too, some of the fun of the jockey's life, as when the sex- ually inexperienced Dunwoody found him- self at 21 in an Australian hotel room with four fellow jockeys holding the door shut from the outside. 'The lady left in the room wasn't a contender for Miss World and she was a fair bit older than me, and a fair bit larger . . A stopwatch had appeared on the bedside table. "You've got 30 minutes," she said.' It was his initiation. Fellow jock- ey Hywel Davies insisted that, when the young Dunwoody emerged, he was a man. In the saddle he was always more than that. He was the true professional.