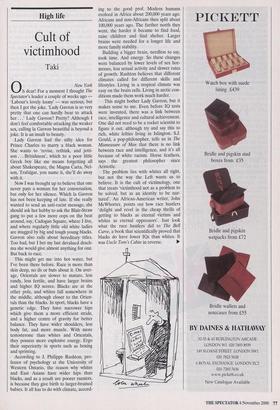 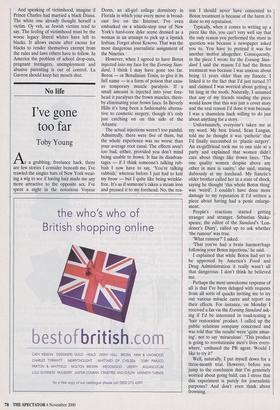 0New York h dear! For a moment I thought The Spectator's leader a couple of weeks ago 'Labour's lovely loony' — was serious, but then I got the joke. 'Lady Gavron is so very pretty that one can hardly bear to attack her ...' Lady Gavron? Pretty? Although I don't feel comfortable attacking the weaker sex, calling la Gavron beautiful is beyond a joke. It is an insult to beauty.

Lady Gavron had the nifty idea for Prince Charles to many a black woman. She wants to 'revise, rethink, and jetti- son . .. Britishness', which to a poor little Greek boy like me means forgetting all about Shakespeare, the Magna Carta, Nel- son, Trafalgar, you name it, she'll do away with it.

Now I was brought up to believe that one never pays a woman for her conversation, but only for her silence. Which la Gavron has not been keeping of late. If she really wanted to send an anti-racist message, she should ask her hubby to ask the Blair-Straw gang to put a few more cops on the beat around, say, Cadogan Square, where I live, and where regularly little old white ladies are mugged by big and tough young blacks. Gavron also rails about hereditary titles. Too bad, but I bet my last devalued drach- ma she would give almost anything for one. But back to race.

This might get me into hot water, but I've been there before. Race is more than skin deep, no ifs or buts about it. On aver- age, Orientals are slower to mature, less randy, less fertile, and have larger brains and higher IQ scores. Blacks are at the other pole, and whites fall somewhere in the middle, although closer to the Orien- tals than the blacks. In sport, blacks have a genetic edge. They have narrower hips which give them a more efficient stride, and a higher centre of gravity for better balance. They have wider shoulders, less body fat, and more muscle. With more testosterone than whites and Orientals, they possess more explosive energy. Ergo their superiority in sports such as boxing and sprinting.

According to J. Philippe Rushton, pro- fessor of psychology at the University of Western Ontario, the reason why whites and East Asians have wider hips than blacks, and as a result are poorer runners, is because they give birth to larger-brained babies. It all has to do with climate, accord- ing to the good prof. Modern humans evolved in Africa about 200,000 years ago. Africans and non-Africans then split about 100,000 years ago. The further north they went, the harder it became to find food, raise children and find shelter. Larger brains were needed for a longer life and more family stability.

Building a bigger brain, needless to say, took time. And energy. So these changes were balanced by lower levels of sex hor- mones, less sexual activity and slower rates of growth. Rushton believes that different climates called for different skills and lifestyles. Living in a tropical climate was easy on the brain cells. Living in arctic con- ditions made them work much harder.

This might bother Lady Gavron, but it makes sense to me. Even before IQ tests were invented, there was a link between race, intelligence and cultural achievement. One did not need to be a rocket scientist to figure it out, although try and say this to rich, white lefties living in Islington. S.J. Gould, a pop-philosopher, tells us in The Mismeasure of Man that there is no link between race and intelligence, and it's all because of white racism. Horse feathers, says the greatest philosopher since Aristotle.

The problem lies with whites all right, but not the way the Left wants us to believe. It is the cult of victimology, one that treats `victimhood not as a problem to be solved, but as an identity to be nur- tured'. An African-American writer, John McWhorter, points out how race hustlers `delight and revel in the cheap thrills of getting to blacks as eternal victims and whites as eternal oppressors'. Just look what the race hustlers did to The Bell Curve, a book that scientifically proved that blacks do have lower IQs than whites. It was Uncle Tom's Cabin in reverse. ► And speaking of victimhood, imagine if Prince Charles had married a black Diana. The white one already thought herself a victim. Oy veh, as Jewish victims tend to say. The feeling of victimhood must be the worse legacy liberal whites have left to blacks. It allows excuse after excuse for blacks to render themselves exempt from the rules and laws others have to follow. In America the problem of school drop-outs, pregnant teenagers, unemployment and abusive parenting is out of control. La Gavron should keep her mouth shut.