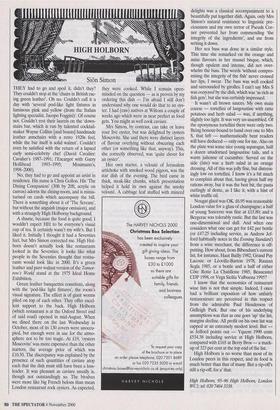 THEY had to go and spoil it, didn't they? They

couldn't stop at the 'chairs in British rac- ing green leather'. Oh no. Couldn't call it a day with 'several pod-like light fixtures in luminous pink and yellow (from the Italian lighting specialist, Jacopo Foggini)'. Of course not. Couldn't rest their laurels on the 'down- stairs bar, which is run by talented cocktail- maker Wayne Collins [and boasts] handmade leather armchairs with a retro 1920s feel, while the bar itself is solid walnut'. Couldn't even be satisfied with the return of a lapsed early semi-celebrity chef (David Cavalier: Cavalier's 1987-1991; l'Escargot with Garry Hollihead 1993-1995; Mosimann's, 1998-2000).

No, they had to go and appoint an artist in residence. His name is Chris Gollon. His `The Dining Companion' (30ft by 20ft, acrylic on canvas) adorns the dining-room, and is minia- turised on cards which accompany the bill. There is something about it of 'The Scream', but without the anguish (major omission), and with a strangely High Holborny background.

A shame, because the food is quite good. I wouldn't expect HH to be everyone's visual cup of tea. It certainly wasn't my wife's. But I liked it. Initially I thought it had a Seventies feel, but Mrs Simon corrected me. High Hol- born doesn't actually look like restaurants looked in the Seventies; it looks like what people in the Seventies thought that restau- rants would look like in 2000. It's a green leather and pure walnut version of the Tomor- row's World stand at the 1975 Ideal Home Exhibition.

Green leather banquettes constitute, along with the 'pod-like light fixtures', the room's visual signature. The effect is of giant worms piled on top of each other. They offer excel- lent support to the back. High Holborn (which restaurant is at the Oxford Street end of said road) opened in mid-August. When we dined there on the last Wednesday in October, most of its 130 covers were unoccu- pied, but enough were in use for the atmo- sphere not to be too tragic. At £19, `oysters Moscovite' was more expensive than the other starters, the average price of which was £10.50. The discrepancy was explained by the presence of such quantities of caviare atop each that the dish must still have been a loss- leader. It was pleasant as caviare usually is, though not outstandingly so. The bivalves were more like big French belons than mean London restaurant rock oysters. As expected, they were cooked. While I remain open- minded on the question — as is proven by my ordering this dish — I'm afraid I still don't understand why one would do that to an oys- ter. I had (raw) natives at Wiltons a couple of weeks ago which were as near perfect as food gets. You might as well cook caviare.

Mrs Simon, by contrast, can take or leave your live oyster, but was delighted by oysters Moscovite. She said there were distinct layers of flavour overlying without obscuring each other (or something like that, anyway). This, she correctly observed, was 'quite clever for an oyster'.

Her own starter, a veloute of Jerusalem artichoke with smoked wood pigeon, was the star dish of the evening. The bird came in thick, steak-like chunks, which presentation helped it hold its own against the smoky veloute. A cabbage leaf stuffed with minced delights was a classical accompaniment to a beautifully put together dish. Again, only Mrs Simon's natural resistance to linguistic pre- ciousness and my own terror of Pseuds Cor- ner prevented her from commending the integrity of the ingredients', and me from writing it down.

Her sea bass was done in a similar style. This time she remarked on the orange and anise flavours in her mussel bisque, which, though opulent and intense, did not over- whelm the bass. The words 'without compro- mising the integrity of the fish' never crossed her lips, I swear. The bass was well cooked and surrounded by girolles. I can't say Mrs S was overjoyed by the dish, which was 'as rich as fish gets', but she was certainly impressed.

It wasn't all brown sauces. My own main course — tortellini of langoustine with ratte potatoes and herb salad — was, if anything, slightly too light. It was very un-assembled. Of the eponymous tortellini there were only two. Being honour-bound to hand over one to Mrs S, that left — mathematically bent readers will have deduced — only one for me. Also on the plate was some nice young asparagus, half a dozen unadorned langoustine tails, and a warm julienne of cucumber. Served on the side (late) was a herb salad in an orange dressing. All of this was jolly fine, but distress- ingly low on tortellini. I know it's a bit much to complain about that, having given half my rations away, but it was the best bit, the pasta curlingly al dente, as I like it, with a hint of white truffle oil.

Nougat glace was OK. £6.95 was reasonable London value for a glass of champagne; a half of young Sancerre was fine at £15.80; and a Bergerac was tolerably rustic. But the last was one-dimensional and dull. And when one considers what one can get for £42 per bottle (or £47.25 including service, as Andrew Jef- ford habitually notes in the Evening Standard) from a wine merchant, the difference is off- putting. How about, from Bibendum's current list, for instance, Haut Bailly 1982, Grand Puy Lacoste or Leoville-Barton 1978, Rauzan Segla 1985, or a bottle and a half of either Cote Rotie La Chatillone 1985, Beaucastel CDP 1998, or Vega Sicilia Valbuena 1995?

I know that the economics of restaurant wine lists is not that simple. Indeed, I once had a brilliant exposition of how unfairly restaurateurs are perceived in this respect from the admirable Paul Henderson of Gidleigh Park. But one of his underlying assumptions was that as one goes 'up' the list, margins decline. All profit on his own list was capped at an extremely modest level. But as Jefford points out — Yquem 1990 costs £534.38 including service at High Holborn, compared with £165 at Berry Bros — a mark- up of 323 per cent at the top end of the list.

High Holborn is no worse than most of its London peers in this respect, and its food is much better than that of many. But a rip-off's still a rip-off, for a' that.