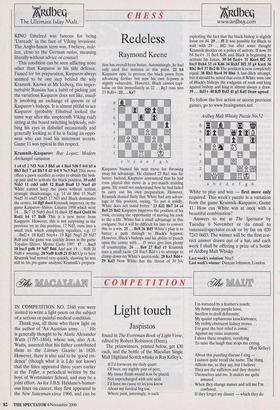 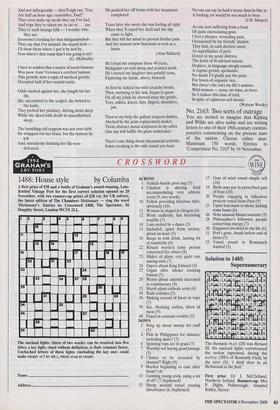 IN COMPETITION NO. 2160 you were invited to write a light poem on the subject of a serious or painful medical condition.

Thank you, all those who threw light on the author of 'An Austrian army. . . . ' He is generally thought to be Alaric Alexander Watts (1797-1864), whose son, also A.A. Watts, asserted that his father contributed them to the Literary Gazette in 1820. However, there is also said to be 'good evi- dence' (though what it is I do not know) that the lines appeared three years earlier in the Trifler, a periodical written by the boys of Westminster School, and may be a joint effort. As for J.B.S. Haldane's humor- ous lines on cancer, they first appeared in the New Statesman circa 1960, and can be found in The Everyman Book of Light Verse, edited by Robert Robinson (Dent).

The prizewinners, printed below, get £30 each, and the bottle of the Macallan Single Malt Highland Scotch whisky is Ray Kelley's.

If I'd forsworn my daily quart Of beer, my nightly pint of port, My tissue fluids would now be placid, Not supercharged with uric acid.

I'd have no cause to let you know About my farcical big toe, Where pain, amusingly, is such I'm tortured by a feather's touch; My funny shiny purple knee, Swollen to droll deformity; My quaint tophaceous knucklebones; My risibly obstruent kidney stones.. .

For gout the best relief is comic: Against my ruins anatomic I shore these couplets, versifying To raise the laugh that stops me crying.

(Ray Kelley) About this puzzling disease I sing I cannot quite recall the name. The thing Affects me, so they say, but I believe They are the sufferers and they deceive Themselves and me. It makes me quite amused When they change names and tell me I'm confused.

If they forget my dinner — which they do And not infrequently — they'll sigh out, 'You Ate half an hour ago; remember, Dad?' They even make up meals they say I've had, And trips they've taken me in car or . . . car. They're such strange folk — I wonder who they are.

Everyone's looking for that thingummybob They say that I've mislaid, the stupid mob I'll show them where I put it by and by. Now where's that comp that I was going to try?

(G. McIlraith) I have to confess that a source of much humour Was poor Aunt Veronica's cerebral tumour. This growth, now a topic of medical gravity, Occupied half of her cranial cavity.

Odds stacked against her, she fought for her life.

She succumbed to the scalpel, she bowed to the knife.

They probed her pituitary, delving down deep While she diced with death in anaesthetised sleep.

The bumbling old surgeon was not over-deft: He whipped out her brain, but the tumour he left And, mistakenly thinking her ills were defeated, He packed her off home with her treatment completed.

Years later she swore she was feeling all right When they X-rayed her skull and the slip came to light, But they left her intact to prevent further pain And her tumour now functions as well as a brain.

(Alan Millard) He's kept me company these 40 years, Malignant rat with sharp and pointed teeth. He's turned my laughter into painful tears, Exploring me inside, above, beneath.

At first he tickled me with scratchy bristle, Then, warming to his task, began to gnaw. On all my joints he chewed away the gristle, Toes, ankles, knees, hips, fingers, shoulders, jaw.

Then to my help the gallant surgeon dashes, Abetted by the joint-replacement-maker. ThoSe abstract metal sculptures in my ashes One day will baffle the glum undertaker.

There's one thing about rheumatoid arthritis: Joints creaking is the only sound you hear. No one can say its bark's worse than its bite is: A barking rat would be too much to bear.

(J.H. Munro) As one now suffering from a bout Of quite excruciating gout, I feel a sharper, wounding pain, Occasioned by my friends' disdain.

They hint, in each derisive snort, At superfluities of port; Detect in my acute distress The fruits of ill-advised excess; Deplore, in language smugly caustic, A regime grossly apolaustic.

No doubt I'd gladly pay the price For hours of orgiastic vice, But (here's the rub) my life's austere: Wild women — none; no wine, no beer.

So I endure this time of trial, In spite of righteous self-denial.

You are invited to imagine that Kipling and Wilde are alive today and are writing letters to one of their 19th-century contem- poraries commenting on the present state of the nation. Choose either man. Maximum 150 words. Entries to `Competition No. 2163' by 16 November.