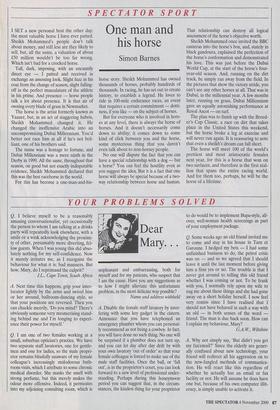 One man and his horse

I SET a new personal best the other day: the most valuable horse I have ever patted. Sheikh Mohammed's people don't talk about money, and still less are they likely to sell, hut, all the same, a valuation of about £50 million wouldn't be too far wrong. Which isn't bad for a crocked horse.

Tall, dark, imposing, with an uncannily direct eye — I patted and received in exchange an assessing look. Slight fuzz in his coat from the change of season, slight falling- off in the perfect musculature of the athlete in his prime. And presence — horse people talk a lot about presence. It is that air of owning every blade of grass in Newmarket.

The horse is the artist formerly known as Yaazer, but, in an act of staggering hubris, Sheikh Mohammed changed it. He changed the inoffensive Arabic into an uncompromising Dubai Millennium. You'd better not race him at all if he's not bril- liant, one of his brothers said.

The name was a hostage to fortune, and Dubai Millennium was a mere ninth in the Derby in 1999. All the same, throughout that season, on good but not exactly indisputable evidence, Sheikh Mohammed declared that this was the best racehorse in the world.

For this has become a one-man-and-his- horse story. Sheikh Mohammed has owned thousands of horses, probably hundreds of thousands. In racing, he has set out to create history, to establish a legend. He loves to ride in 100-mile endurance races, an event that requires a certain commitment — dotti- ness, if you like — on the subject of horses.

But for everyone who is involved in hors- es at any level, there is always the horse of horses. ' And it doesn't necessarily come down to ability; it comes down to some kind of click between you and the horse, some mysterious thing that you daren't even talk about to non-horsey people.

No one will dispute the fact that you can have a special relationship with a dog — but a horse? You can feel the hostility even as you suggest the idea. But it is a fact that one horse will always be special because of a two- way relationship between horse and human. That relationship can destroy all logical assessment of the horse's objective worth.

Sheikh Mohammed once invited the BBC cameras into the horse's box, and, stately in black gandoura, explained the perfection of the horse's conformation and demonstrated his love. This was just before the Dubai World Cup, at the start of the horse's four- year-old season. And, running on the dirt track, he simply ran away from the field. In the pictures that show the victory stride, you can't see any other horses at all. That was in Dubai, in the millennial year. A few months later, running on grass, Dubai Millennium gave an equally astonishing performance at Royal Ascot — on turf.

The plan was to finish up with the Breed- er's Cup Classic, a race on dirt that takes place in the United States this weekend, but the horse broke a leg at exercise and will never run again. It is reassuring to note that even a sheikh's dream can fall short.

The horse will meet 100 of the world's prettiest and most aristocratic females next year, for this is a horse that won on two surfaces, and therefore is the first stal- lion that spans the entire racing world. And for them too, perhaps, he will be the horse of a lifetime.