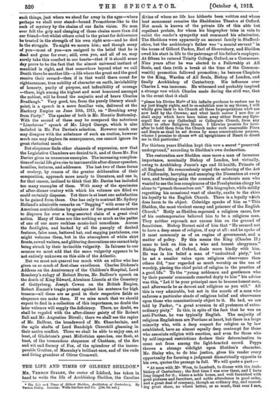 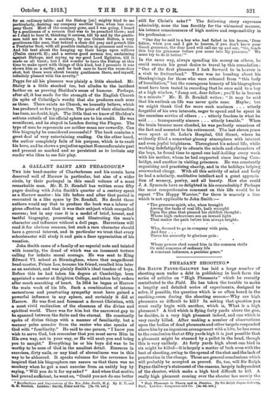 THE LIFE AND TIMES OF GILBERT SHELDON.*

Mn. VERNON STALEY, the rector of Ickford, has taken in hand to write the life of Archbishop Sheldon, the Caroline • The Life and Times of Gilbert Sheldon, Archbishop of Canterbury. By 'Vernon Stiley. London: Wells Gardner and Co. [10s. 0d. net.]

divine of whom no life has hitherto been written and whose best monument remains the Sheldonian Theatre at Oxford. Not much is known of the private life of this able but repellent prelate, for whom his biographer tries in vain to enlist the reader's sympathy and command his admiration.

The Sheldons were apparently an ancient family in Stafford- shire, but the archbishop's father was "a menial servant" in the house of Gilbert Parker, Earl of Shrewsbury, and Sheldon owed his start in life to the patronage of his father's employer. At fifteen he entered Trinity College, Oxford, as a Commoner.

Nine years after he was elected to a Fellowship at All Souls, and then (with a break at the time of the Common- wealth) promotion followed promotion ; he became Chaplain to the King, Warden of All Souls, Bishop of London, and finally Archbishop of Canterbury. His influence over Charles I. was immense. He witnessed and probably inspired a strange vow which Charles made during the civil war, that in the event that it shall

"please his Divine Matie of his infinite goodness to restore me to my just kingly rights, and to re-establish mee in my throne, I will wholly give back to his Church all those Impropriations whet are now held by the Crowne ; and what lands soever I now doe or shall enjoy which have been taken away either from any Epis- copal! See or any Cathedral or Collegiate Church, from any Abbey or other Religious House. I likewise promise for here- after to hold them from the Church under such reasonable Fines and Rents as shall be set downs by sonic conscientious persons, whome I promise to choose wth all uprightness of Heart to direct me in this particular."

For thirteen years Sheldon kept this vow a secret "preserved underground," according to Sheldon's own declaration.

The restoration saw Sheldon once more a man of immense importance, nominally Bishop of London, but virtually, owing to Archbishop Juxon's age and ill-health, Primate of all England. He remorselessly urged the enforcing of the Act

of Uniformity, harrying and annoying the Dissenters at every turn, and brushing aside the counsels of moderate men who

wanted to see the less conspicuous of the Presbyterian clergy let

alone to "preach themselves out." His biographer, while mildly regretting his occasional want of charity, exalts to the skies his loyalty to the English Church. There is a loyalty which does harm to its object. Coleridge speaks of him as " This Sheldon, the most virulent enemy and poisoner of the English Church." Hotly as Sheldon espoused a religious cause, few of his contemporaries believed him to be a religious man.

They neither reproach nor excuse him on the ground of fanaticism. Bishop Burnet said of him that " He seemed not to have a deep sense of religion, if any at all : and he spoke of it most commonly as of an engine of government, and a matter of policy. By this means the King (Charles II.) came to look on him as a wise and honest clergyman." Bishop Parker, of Oxford, deals more kindly with him. He was in his belief a man of "undoubted piety," but he set a smaller value upon religious observance than

others did, "nor regarded so much worship as the use of worship, placing the chief point of religion in the practice of a good life." To the "young noblemen and gentlemen who by their parents' commands resorted dayly to him " his advice was this, "Let it be your principal care to become honest men, and afterwards be as devout and religions as you will." All this is very admirable, but not in the mouth of a man who

enforces a particular shade of religious belief and observance upon those who conscientiously object to it. He had, we are told by Parker, "a great aversion to all pretences of extra- ordinary piety." In this, in spite of the fact that he was an anti-Puritan, he was typically English. The majority of

religious Englishmen are Puritans at heart, but there is a large minority who, with a deep respect for religion as by law

established, have an almost equally deep contempt for those who associate religion with emotion, and even for those who by self-imposed restrictions declare their determination to come out from among the light-hearted crowd. Pepys throws a strange sidelight upon Sheldon's character. Mr. Staley who, to do him justice, gives his reader every opportunity for forming a judgment diametrically opposite to his own, quotes the passage in full. We will quote a part :—

"At noon with Mr. Wren, to Lambeth, to dinner with the Arch- bishop of Canterbury; the first time I was ever there, and I have long longed for it ; where a noble house, and well furnished with good pictures and furniture, and noble attendance in good order, and a great deal of company, though an ordinary day, and exceed- ing great cheer, no where better, or so much, that ever I saw, for an ordinary table : and the Bishop [sic] mighty kind to me particularly, desiring my company another time, when less com- pany there. Most of the company gone, and I was going, I heard by a gentleman of a sermon that was to be preached there ; and so I staid to hear it, thinking it serious, till by and by the gentle- men told me it was a mockery, by one Cornet Bolton, a very gentleman-like man, that behind a chair did pray and preach like a Presbyter Scot, with all possible imitation in grimaces and voice. And his text about the hanging up their harps upon willows (Psalm cxxxvii. 2); and a serious good sermon too, exclaiming against Bishops, and crying up my good Lord Eglinton, till it made us all burst; but I did wonder to have the Bishop at this time to make sport with things of this kind, but I perceive it was shown him as a rarity; and he took care to have the room-door shut, but there were about twenty gentlemen there, and myself, infinitely pleased with the novelty."

Pepys for all his pleasure was plainly a little shocked. Mr.

Staley is a little shocked too, but alludes to the incident farther on as proving Sheldon's sense of humour. Perhaps, after all, it has made for the strength of the English Church (in spite of Coleridge's words) that she produces such sons as these. There exists no Church, we honestly believe, which has produced so few hypocrites. The price of their elimination has been, no doubt, high. The little that we know of Sheldon's actions outside of his official sphere are to his credit. He was munificent, and he stayed in London during the Plague. The type of men he represents are neither mean nor cowardly. Can this biography be considered successful ? The book contains a great deal of very entertaining reading. On the other hand, the author completely fails of his purpose, which is to exalt his hero, and he shows a prejudice against Nonconformists past and present so marked and so persistent as to irritate any reader who likes to see fair play.