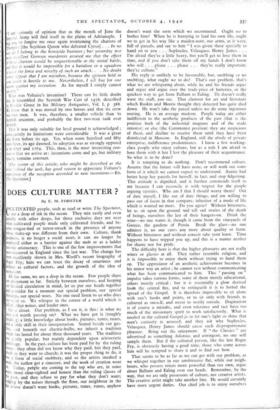 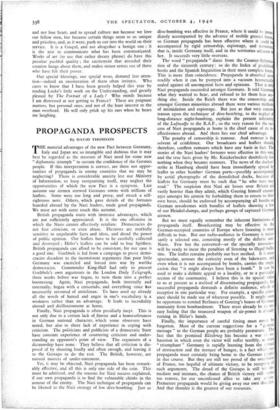 CILILTIVATED people, such as read or write The Spectator, U are a drop of ink in the ocean. They mix easily and even genially with other drops, for those exclusive days are over then cultivated people made only cultivated friends, and be- ante tongue-tied or terror-struck in the presence of anyone those make-up was different from their own. Culture, thank -,odness, is no longer a social asset, it can no longer be tmployed either as a barrier against the mob or as a ladder .nto the aristocracy. This is one of the few improvements that ave occurred in England since the last war. The change has aeon excellently shown in Mrs. Woolf's recent biography of Roger Fry; here we can trace the decay of smarmess and fashion as cultural factors, and the growth of the idea of C1110y trent.

All the same, we are a drop in the ocean. Few people share our enjoyment so far. Strictly between ourselves, and keeping Our limited circulation in mind, let us put our heads together and consider for a moment our special problem, our special blessings, our special woes. No one need listen to us who does not v.,tnt to. We whisper in the corner of a world which is of other noises, and louder ones.

Ort'e closer. Our problem, as I see it, is this: is what we re of worth passing on? What we have got is (roughly !.;) a little knowledge about books, pictures, tunes, runes, a Ade skill in their interpretation. Seated beside our gas- , and beneath our electric-bulbs, we inherit a tradition ch has lasted for about three thousand years. The tradition r ally popular, but mainly dependent upon aristocratic tronage. In the past, culture has been paid for by the ruling es; they often did not know why they paid, but they paid, ch as they went to church; it was the proper thing to do, it a form of social snobbery, and so the artists sneaked a the author got a sinecure, and the work of creation went Today, people are coming to the top who are, in some Ys. more clear-sighted and honest than the ruling classes of past, and they refuse to pay for what they don't want; rig by the noises through the floor, our neighbour in the above doesn't want books, pictures, tunes, runes, anyhow doesn't want the sorts which we recommend. Ought we to bother him? When he is hurrying to lead his own life, ought we to get in his way like a maiden-aunt, our arms, as it were, full of parcels, and say to him " I was given these specially to hand on to you . . . Sophocles, Velasquez, Henry James . . . I'm afraid they're a little heavy, but you'll get to love them in time, and if you don't take them off my hands I don't know who will . . . please . . . please . . they're really important. they're culture."

His reply is unlikely to be favourable, but, snubbing or no snubbing, what ought we to do? That's our problem, that's what we are whispering about, while he and his friends argue and argue and argue over the trade-price of batteries, or the quickest way to get from Balham to Ealing. He doesn't really want the stuff, you see. That clamour for art and literature which Ruskin and Morris thought they detected has quite died down. He won't take the parcel unless we do some ingenious touting. He is an average modern. People today are either indifferent to the aesthetic products of the past (that is the position both of the industrial magnate and of the trade unionist) or else (the Communist position) they are suspicious of them, and decline to receive them until they have been disinfected in Moscow. In England, still the abode of private enterprise, indifference predominates. I know a few working- class people who enjoy culture, but as a rule I am afraid to bore them with it lest I lost the pleasure of their acquaintance. So what is to be done?

It is tempting to do nothing. Don't recommend culture. Assume that the future will have none, or will work out some form of it which we cannot expect to understand. Auntie had better keep her parcels for herself, in fact, and stop fidgetting. This attitude is dignified, and it further commends itself to me because I can reconcile it with respect for the people arguing upstairs. Who am I that I should worry them? Out of date myself, I like out of date things, and am willing to pass out of focus in that company, inheritor of a mode of life which is wanted no more. Do you agree? Without bitterness, let us sit upon the ground and tell sad stories of the death of beings, ourselves the last of their hangers-on. Drink the wine—no one wants it, though it came from the vineyards of Greece, the gardens of Persia. Break the glass—no one admires it, no one cares any more about quality or form. Without bitterness and without conceit take your leave. Time happens to have tripped you up, and this is a matter neither for shame nor for pride.

The difficulty here is that the higher pleasures are not really wines or glasses at all. They rather resemble religion, and it is impossible to enjoy them without trying to hand them on. The appreciator of an aesthetic achievement becomes in his minor way an artist ; he cannot rest without communicating what has been communicated to him. This passing on " impulse takes various forms, some of them merely educational, others merely critical ; but it is essentially a glow derived froth the central fire, and to extinguish it is to forbid the spread of the Gospel. It is therefore impossible to sit alone with one's books and prints, or to sit only with friends as cultured as oneself, and never to testify outside. Dogmatism is of course a mistake, and even tolerance and tact have too much of the missionary spirit to work satisfactorily. What is needed in the cultural Gospel js to let one's light so shine that men's curiosity is aroused, and they ask why Sophocles, Velasquez, Henry James should cause such disproportionate pleasure. Bring out the enjoyment. If " the Classics " are advertised as something dolorous and astringent, no one will sample them. But if the cultured person, like the late Roger Fry, is obviously having a good time, those who come across him will be tempted to share it and to find out how.

That seems to be as far as we can get with our problem, as we whisper together in our unobtrusive flat, while our neigh- bours, who possess voices more powerful than our own, argue about Balham and Ealing over our heads. Remember, by the way, that we are only possessors of culture, not creative artists. The creative artist might take another line. He would certainly have more urgent duties. Our chief job is to enjoy ourselves and not lose heart, and to spread culture not because we love our fellow men, but because certain things seem to us unique and priceless, and, as it were, push us out into the world on their service. It is a Gospel, and not altogether a benign one ; it is the zest to communicate what has been communicated. Works of art (to use that rather dreary phrase) do have this peculiar pushful quality ; the excitement that attended their creation hangs about them, and makes minor artists out of those who have felt their power.

Our special blessings, our special woes, demand less atten- tion—indeed an enumeration of them often irritates. Who cares to know that I have been greatly helped this year by reading Locke's little work on the Understanding, and greatly pleased by The Portrait of a Lady? Who minds because I am distressed at not getting to France? These are poignant matters, but personal ones, and not of the least interest to the man overhead. He will only prick up his ears when he hears me laughing.