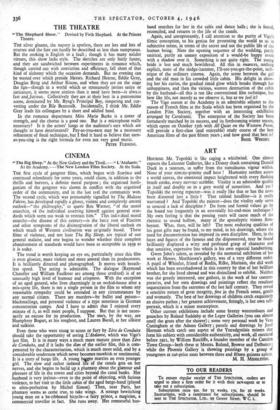 At the Academy. The New London Film Society. At the Scala.

THE first cycle of gangster films, which began with Scarface and continued relentlessly for some years, could claim, in addition to the thrills and horrors, a definite moral purpose ; the organised hooli-_ ganism of the gangster was shown in conflict with the organised order of the community, and in the last reel the community won. The second cycle, which was presumably signalled by The Maltese Falcon, has developed rapidly a glossy, violent and completely amoral outlook—" the philosophy," to quote Rex Warner, " of the moral anarchist, of the individual asserting himself against general stan- dards which seem too weak to restrain him." This individual moral anarchy—the disease of this century—is the basic root of Fascism and other symptoms of the disintegration of the liberal outlook on which much of Western civilisation was originally based. These films of violence, and not least The Big Sleep, are typical of our general malaise, and one begins to wonder whether their complete abandonment of standards would have been as acceptable in 1939 as it is today.

The trend is worth keeping an eye on, particularly since this film is even glossier, more violent and more amoral than its predecessors. It is brilliantly directed and photographed. It moves with breath- less speed. The acting is admirable. The dialogue (Raymond Chandler and William Faulkner are among those credited) is of an unusually high level of humour and crispness. With the exception of an aged general, who lives charmingly in an orchid-house after a mis-spent life, there is not a single person in the film to whom any reasonable sympathy could be extended in any circumstances by any normal citizen. There are murders—by bullet and poison- blackmailings, and personal violence of a type notorious in German concentration camps. And I have to admit that I enjoyed every minute of it, as will most people, I suppose. But that is not neces- sarily an excuse for its production. The stars, by the way, are Humphrey Bogart, at his toughest, and Lauren Bacall, at her silkiest and sulkiest.

Even those who were stung to scorn or fury by Zero de Conduite should take the opportunity of seeing L'Atalante, which was Vigo's last film. It is in many ways a much more mature piece than Zero de Conduite, and if it lacks the élan of the earlier film, this is com- pensated by the characterisation, which is much more solid, and by a considerable tenderness which never becomes mawkish or sentimental. It is a story of barge life. A young bagee marries an even younger girl. The slow and rather isolated life of the canals gets on her nerves, and she begins to build up a phantasy about the glamour and pleasure of life in the towns and cities beyond the canal banks. Her husband is very jealous—even to the point of objecting, with furious violence, to her visit to the little cabin of the aged barge-hand (played to ultra-perfection by Michel Simon). Then, near Paris, her phantasy seems to come true, to take wings. A strange bewitching young man on a be-ribboned bicycle—a fairy prince, a magician, a commercial traveller in fact. She runs away. Her remorseful hus-

band searches for her in the cafés and dance halls ; she is found, reconciled, and returns to the life of the canals.

Again, and unrepentantly, I call attention to the purity of Vigo's filmic conception, to his genius for presenting the world to us in subjective terms, in terms of the secret and not the public life of the human being. Note the opening sequence of the wedding, partly satirical, partly an uneasy exposition of a would-be happy event with a shadow over it. Something is not quite right. The young bride is lost and much bewildered. All this in nuances, nothing explicit, none of the sledge-hammer, I'll-see-you7get-the-point, tech- nique of the ordinary cinema. Again, the scene between the girl and the old man in his crowded little cabin. His delight in show- ing her his curios, the gradual timid glow which breaks through her unhappiness, and then the vicious, wanton destruction of the cabin by the husband—all this is not like conventional film technique, but how like life, not merely as we observe it, but as we feel it!

The Vigo season at the Academy is an admirable adjunct to the season of French films at the Scala which has been organised by the London Film Society, together -with an interesting exhibition arranged by Cavalcanti. The enterprise of the Society has been fortunately matched by its success, and its forthcoming winter season, which opens on October 13th with All Quiet on the Western Front, will provide a first-class (and enjoyable) study course of the best American films of the past fifteen years ; and how good thatbest is!