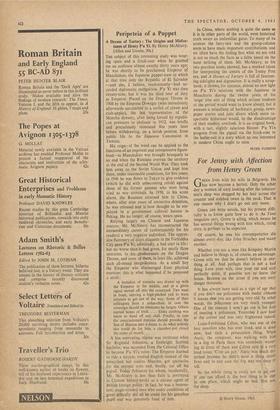 For Jenny with Affection from Henry Green

GREEN lives with his wife in Belgravia. He has now become a hermit. Only the other day a woman of sixty looking after the tobacco- nist's shop was dragged by her hair across the counter and stabbed twice in the neck. That is one reason why I don't go out any more.

Green can write novels, but his present diffi- culty is to know quite how to do it. As Time magazine says, Green is ailing, which means he has several things wrong with him which, rising sixty, is perhaps to be expected.

Of course, he sees his contemporaries die almost every day, like John Strachey and many another.

Whether you are a man like Kingsley Martin and believe in things is, of course, an advantage. Greed tells me that he doesn't believe in any- thing at all. And perhaps that is not a bad thing. Love your wife, love your cat and stay perfectly quiet, if possible not to leave the house. Because •on the street if you are sixty danger threatens.

It has always been said as a sign of age that if you don't see policemen with medal ribbons it means that you are getting very old. In other words, the policemen are very much younger. One of the reasons I won't go out is for fear of meeting a policeman. Yesterday I saw four at the corner and was very frightened indeed.

Louis-Ferdinand Celine, who was one of the best novelists who has ever lived, and is dead now, had such a persecution thing. Whea Auric, the composer, was walking with hint in a fog in Paris there was somebody waver- ing in front of them and Celine said in a very loud voice, 'C'est on juif: Auric was Much dis- turbed because he didn't have a thing about Jews and in any case the fog was too' deep to tell.

So the whole thing is really not to go out If one can afford it, the best thing is to staY in one place, which might be bed. Not sex, for sleep.