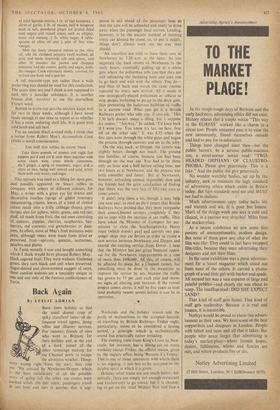 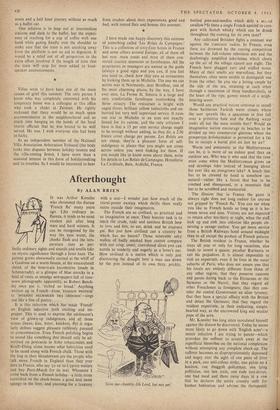 posed to sail ahead of the passenger boat so that the cars will be unloaded and ready to drive away when the passenger boat arrives. Loading, however, is by the ancient method of hoisting every car aboard by crane, so, to put it mildly, things don't always work out the way they should.

'All travellers are told to have their cars at Newhaven by 7.30 a.m. at the latest. So you

negotiate the back streets of Newhaven in the

early hours, eventually pulling up at a white gate where the policeman tells you that they are

still unloading the incoming boat. and asks you

to go back and wait with the others. You do— and then sit back and watch the same routine repeated by every new arrival. All it needs is one strategically-placed policeman or otlicial to stop people bothering to go up to the dock gate,

thus preventing the ludicrous build-up of traffic in a narrow road. What you get is a British Railways porter who tells you, if you ask, "This

7.30 lark doesn't mean a thing, but I suppose it's orders." "Anyway," he added, "I'd keep back if I were you You know its last on here, first ofT on the other side." It was 8.15 when the first cars went through the white gates and began the process through customs and on to the jetty. 'On the way back, at Dieppe, the system was slightly better, though not much. The ground

was familiar, of course, because you had been through on the way out. You had to be there only an hour and a half before sailing time, not two hours as at Newhaven,' and the process was both smoother and faster.' But at Newhaven, however, unloading seemed impossibly slow and

my friends had the grim satisfaction of finding that theirs was the very last of fifty-two cars to Come ashore.

It didn't help them a bit, though it may help you next year, to read on their return that British

Railways have decided that they must ,reorganise

their cross-Channel services completely if they are to cope with the increase in car traffic. They have asked the Minister of -transport for per-

senger ships into car ferries in order to create a ncw, service between Newhaycn,and Dieppe.and extend the existing service. from Dover. .1 hear that the Minister has just Lti cit financial appro- val for the Newhaven i,rnprovements at a cost of more than £800,000. Ag,fliis,, of coorse, be affected by plans for a, channel tunnel, but something must be done' in the , meantime to improve the service by sea, 'because the traffic has grown by 15 per cent each year and shows no signs of abating and because, if the tunnel project comes about, it will be five years at least (and probably nearer seven) before it can be in operation.

Weekends and the holiday season add the perils of malnutrition 'to the accepted hazards of. travelling by British Railways. Friday night, particularly, seems to be considered a fasting period, a . principle which is ecclesiastically sound but practically rather irritating.

The evening train from King's Cross to New- castle, for instance, has • a dining-car on every weekday except Friday, the official reason, given by the inquiry office, being 'Because it's Friday.' This is one of those utterances with w hich there is no arguing: it just has to be accepted in the delphic spirit in which it is given.

Holiday relief trains are nut much better. Ad- mittedly. there are simply not enough restaurant and kitchen-cars to go round, but it is chasten- ing to get on the relief Midday Scot and face a

seven and a half hour journey without as much as a buffet car.

One solution is to leap out at intermediate stations and dash to the buffet, but the experi- ence of reaching for a cup of coffee with one hand while gazing fixedly over the shoulder to make sure that the train is not sneaking away from the platform is not an aid to digestion. It would be a relief out of all proportion to the extra effort 'involved if the length of time that the train will stop for were added to loud- speaker announcements.

Villas seem to have been one of the main causes of grief this summer. The only person I know who was completely contented with his temporary home was a colleague at this office who took a chalet at Zermatt. He rightly reckoned that there would be so much spare accommodation in the neighbourhood and so much time hanging on the hands of the local tourist officials that he was bound to be well served. He was. I wish everyone else had been as lucky.

As an independent member of the National Villa Association Arbitration Tribunal (the body looks into disputes between holiday tenants and the villa-renting firms), I have more than a seasonal interest in this form of holidaymaking and its troubles. So I would be interested to hear

from readers about their experiences, good and bad, with rented flats and houses this summer.

I have made one happy discovery this summer of something called 'Les Relais de Campagne.' This is a collection of sixty-four hotels in France and some others around Europe, all of them off but near main roads and most of them con- verted country mansions or farmhouses; All the proprietors or managers are named in the guide (always a good sign) and you can, if you feel you need to, check how they rate as restaurants by looking them up in Michelin. The one we ran across was in Normandy, near Honfleur, one of the most charming places, by the way, I have ever seen. La Ferme St. Simeon is a large and very comfortable farmhouse overlooking the Seine estuary. The restaurant is bright with caged doves, brilliant yellow tablecloths and un- hurried but very well supervised service. It rates one star in Michelin in an area not exactly famed for its cuisine, and the only criticism I have is that a 15 per cent service charge ought to be enough without adding, as they do, a 2.50 francs cover charge per person. Les Relais are not cheap; they're a pleasant, form of self- indulgence in places•that you might not come across unless you were looking for them. If you would like to know more about them, write for details to Les Relais de Campagne, Hostellerie La Cardinale, Baix, Ardeche, France.