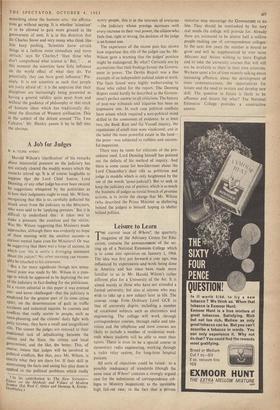 Page 7, 4 October 1963 — Harold Wilson's 'clarification' of his remarks about ministerial pressure on
Close

Harold Wilson's 'clarification' of his remarks about ministerial pressure on

the judiciary has not entirely cleared the muddy waters which the remarks stirred up. It is of course laughable to suppose ttiat the Lord Chief Justice, Lord Denning, or any other judge has ever been swayed by suggestions whispered by the politicians as to how their judgments ought to read. Mr. Wilson, recognising that this is so, carefully deflected his attack away from the judiciary to the Ministers, Who were said to be 'applying pressure.' But it is difficult to understand this: it takes two to make a pressure, the assailant and the victim. Was Mr. Wilson suggesting that Ministers made approaches, although there was evidently no hope of these meeting with the smallest success—a curious mental lapse even for Ministers? Or was he suggesting that there was a hope of success, in Which case this is surely a d imaging statement about the judges? No other meaning can reason- ably be attached to his statement.

But a far more significant though less sensa- tional point was made by Mr. Wilson in a pass- age in which he appeared to be deploring the use or the judiciary in fact-finding for the politicians. In a recent editorial in this paper it was pointed out—and never challenged—that the judiciary is employed for the greater part of its time, crime apart, on the determination of guilt in traffic accidents and industrial injuries. In contests and conflicts that really matter to people, such as town-planning and the citizens' daily fight with Petty tyranny, they have a small and insignificant role.-The sooner the judges are restored to their traditional task of adjudicating between the citizen and the State, the citizen and local government, and the like, the better. This, of course, means that judges will be involved in political conflicts. But that, pace Mr. Wilson, is exactly what they are there for. If their skill in ascertaining the facts and seeing fair play done is aPplied to the political problems which really 1 In his contribution to The New Scientist— essays on the Methods and Values of Modern Science. (Ed. Paul C. Obler and Herman A. Estrin: Doubleday.) worry people, this is in the interests of everyone —the judiciary whose prestige increases with every increase in their real power, the citizen who feels that, right or wrong, the decision of the judge is an honest one.

The experience of the recent past has shown how important this role of the judges can be Mr. Wilson gave a warning that the judges' position might be endangered. By what? Certainly not by accusations that their findings favour the Govern- ment in power. The Devlin Report was a fine example of an independent judicial talent at work. The facts found were highly embarrassing to those who called for the report. The Denning Report could hardly be described as the Govern- ment's perfect answer to all criticisms. The history of post-war tribunals and inquiries has been an impressive one. In each case political conflicts have arisen which required a non-political mind skilled in the assessment of evidence. In at least two, the Bank Rate and the Vassall inquiry, the reputations of small men were vindicated; and in the latter the most powerful estate in the land— the press—was subjected to ruthless and success- ful inspection.

There may be room for criticism of the pro- cedures used. Lord Denning himself has pointed out the defects of his method of inquiry. And there is some cause for bewilderment about the Lord Chancellor's dual role as politician and judge (a muddle which is only heightened by the use of the words 'quasi-judicial). But to seek to keep the judiciary out of politics, which is as much the business of judges as trivial breach of promise actions, is to invite the charge that Mr. Wilson (who described the Prime Minister as sheltering behind the judges) is himself hoping to shelter behind politics.