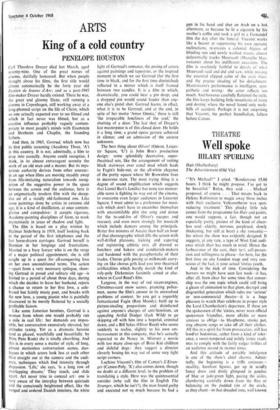 King of a cold country ARTS

Carl Theodore Dreyer died last March, aged seventy-nine. One of the great names of cinema, dutifully honoured. But when people thought about his films, the first title would almost automatically be the forty year old Passion de Jeanne d'Arc; and as a post-1945 film-maker Dreyer hardly existed. There he was, the great and gloomy Dane, still running a cinema in Copenhagen, still working away ai a long-planned script on the life of Christ, which no one actually expected ever to see filmed and which in fact never was filmed, but as a creative influence probably vaguely contem- porary in most people's minds with Eisenstein and Stroheim and Chaplin, the founding fathers.

And then, in 1965, Gertrud, which now has its first public screening (Academy Three, 'A') in this country. It is not, admittedly, a film to drop into casually. Anyone could recognise, I think, in its almost extravagant serenity the work of an old man and a master. But its mys- terious authority derives from other sources: in an age when films are moving steadily away from life-imitating naturalism towards recog- nition of the suggestive power in the space between the screen and the audience, here is an enigmatically modern film with the decep- tive air of a staidly old-fashioned one. Like some paintings done by artists in extreme old age, it is a kind of distillation, at once contem- plative and compulsive: it accepts rigorous, Academy-painting disciplines of form, to work mysteriously in areas of shadow and light.

The film is based on a play written by Hjalmar Soderberg in 1919, itself looking back to the period of the first telephones and the last horse-drawn carriages. Gertrud herself is Ibsenian in her longings and frustrations. Married to a busy lawyer who is on the verge of a major political appointment, she is still caught up in a quest for all-conquering love on her own unconditional terms. The action —apart from a very necessary epilogue, show- ing Gertrud in proud and solitary old age—is limited to a period of about three days, during which she decides to leave her husband, rejects a chance to return to her first love, a cele- brated but faintly musty poet, and breaks with the new love, a young pianist who is painfully discovered to be merely flattered by a socially profitable liaison.

Like some Jamesian heroines, Gertrud is a woman from whom one would probably run a mile in real life: her demands are impos- sible, her conversation excessively elevated, her attitudes taxing. Yet as a dramatic heroine (and as played, watchfully and beautifully. by Nina Pens Rode) she is totally absorbing. And this is in every sense a matter of style, of long, almost motionless conversation scenes, duo- logues in which actors look less at each other than straight out at the camera and the audi- ence, techniques which find intensity through dispassion. 'Life,' she says, 'is a long row of overlapping dreams.' They touch, and slide apart. Art never tries to conceal art: one is very aware of the interplay between quietude and the consciously heightened effect, like the ranged and ordered Danish interiors, the white light of Gertrud's romance, the posing of actors against paintings and tapestries, or the inspired moment in which we see Gertrud (for the first time in black, and for the first time diminished) reflected in a mirror which is itself framed between two candles. It is a film in which, dramatically, you could hear a pin drop; and a dropped pin would sound louder than any- one else's pistol shot. Gertrud learns, in effect, what it is to be Gertrud; and at the end, in spite of her motto 'Amor Omnia,' there is still `the irreparable loneliness of the soul,' the shutting of a door. The last shot of Dreyer's last masterpiece is of this closed door. He holds it a long time, a grand opera gesture achieved in silence; and an admission of the austere unknown.

The best thing about Oliver! (Odeon, Leices- ter Square, `U') is John Box's production design : some splendidly decorative, super- theatrical sets, like the arrangement of rotting black stairways over canal mud which leads to Fagin's hide-out, or the all-white elegance of the pretty square where Mr Brownlow lives in decorous state. The most trying thing is a degree of sound amplification which suggests that Lionel Bart's familiar but none too memor- able score is fighting its way out of the cinema, to overcome even larger audiences in Leicester Square. I must admit to a preference for musi- cals which don't have to encumber themselves with unassimilable plot (no song and dance for the to-and-fro of Oliver's escapes and rescues); and even more strongly for musicals which include dancers among the principals. Better five minutes of Astaire than half an hour of that choreography which fills the screen with well-drilled platoons, kicking and capering and registering athletic zest, all dressed as butchers and bakers and candlestick-makers and burdened with the paraphernalia of their trades. Chorus girls posing as milkmaids carry- ing on like chorus girls lead you into theatrical artificialities which hardly match the kind of roly-poly Dickensian facsimile aimed at else- where in Carol Reed's film.

Largesse, in the way of red steam-engines, Christmas-card snow scenes, prancing police- men, seems the film's answer to its unresolved problems of context. So you get a roguishly fantasticated Fagin (Ron Moody), built up to picture-stealing proportions and disinfected against anyone's charges of anti-Semitism, an appealing Artful Dodger (Jack Wild) to go skipping off with him into a hopeful, criminal dawn, and a Bill Sykes (Oliver Reed) who seems suddenly to realise, slightly to his own em- barrassment in this company, that he's actually expected to do Nancy in. Mistrust a movie with too many close-ups of Bisto Kid children and doleful dogs: they suggest a director cleverly boxing his way out of some very tight script corners.

Luchino Visconti's film of Camus's L'Etran- ger (Cameo-Poly, 'X') also comes down, though no doubt at a different level, to the problem of translating a style. Here was the quintessential outsider (why call the film in English The Stranger, which he isn't?), the man found guilty and executed not so much because he had a gun in his hand and shot an Arab on a hot. afternoon, as because he lit a cigarette by his mother's coffin and took a girl to a Fernandel film the day after the funeral. Visconti works like a beaver at suppressing his own operatic inclinations, re-creates a colonial Algiers of blinding sun and newly washed streets, almost deferentially tracks Meursault (Marcell°. Mas- troianni) about his indifferent occasions. The film is resolutely faithful to details of what Meursault said and did and saw, while missing the essential clipped calm of the style blanc and the precise shading of his detachment. Mastroianni's performance is intelligent, sym- pathetic and wrong: the actor reflects too much. And however carefully flattened the style, the film keeps building little mountains of irony and destiny where the novel found only mole- hills of accident. Perhaps it is not surprising that Visconti, the perfect Stendhalian, falters before Camus.