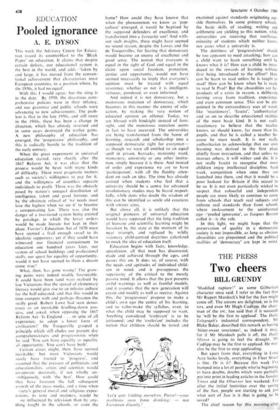 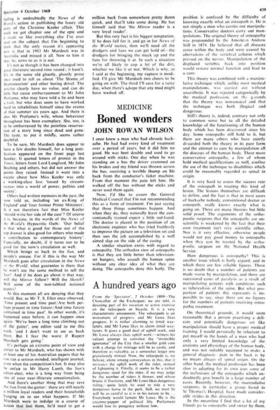 'Modified rapture!' as some Gilbertian character once said. I refer to the fact that Mr Rupert Murdoch's bid for the Sun might come off. The unions are delighted, so is the NPA, and even Mr Hugh Cudlipp, the chair- man of the IPC, has said that if it succeeds he 'will be the first to applaud'. The Daily Telegraph's industrial correspondent, Mr Blake Baker, described this remark as having 'bitter-sweet overtones', as indeed it may. for if Mr Murdoch pulls it off, the Daily Mirror is going to feel the draught. Mr Cudlipp may be the first to applaud. He may also be the first to stop applauding.

But apart from that, everything in Long Acre looks lovely, everything in Fleet Street is fine. Or is it? Because this week l'se bumped into a lot of people who're beginning to have doubts, doubts which were partially put into print in leading articles in the Sunday Times and the Observer last weekend. For after the initial festivities over the saving of the Sun, people are starting to ask just what sort of Sun is it that is going to be saved?

The chief reason for this morning-after

feeling is undoubtedly the News of the World's action in publishing the hoary old story of the Christine Keeler affair. This week we got chapter one of the epic and it reads so like everything else I've ever read on the subject that I'm beginning to think that the only -reason it's appearing now is that in 1963 Mr Murdoch was in Australia and missed it all. New to him it may be, news to us it is not.

It's not as though it has been changed into great literature second time round ; it hasn't. It's in the same old ghastly, ghostly prose once used to tell us about 'The Shame ,of Shamateurism' and other boring drivel. The articles clearly have no value, and can do little but cause embarrassment to Mr John Profumo, who may have told a lie and been a fool, but who does seem to have worked hard to rehabilitate himself since the events of that summer six years ago. And there is also Mr Profumo's wife, whose behaviour throughout has been exemplary. She, too, is to be embarrassed by the pointless resurrec- tion of a story long since dead and gone. The taste, to put it mildly, seems rather doubtful.

To be sure, Mr Murdoch does appear to have a few doubts himself, for a long justi- fication appeared on the front page last Sunday. It quoted letters of protest in the Times, letters from Lord Longford, Mr John Boulting and others, but did not answer the points they raised. Instead it went into a weenie about how Miss Keeler was only a working-class lass 'tossed by circum- stances into a world of power, politics and society'.

Others had written memoirs in the past, the Now told us, including 'an ex-King of England' and 'four former Prime Ministers'. Is it not therefore fair that Miss Keeler 'should write her side of the case'? Of course it is, because, in the words of the News of the World's Hypocritic Oath: 'Our belief is that what is good for those out of the top drawer is also good for others who made a contribution to contemporary history'. Especially, no doubt, if it turns out to be good for the NOW'S circulation as well.

Which brings us back to the Sun, and people's unease. For if this is the way Mr Murdoch goes after circulation in the News of the World, what guarantee is there that he won't use the same method to sell the Sun? And if he does go about it that way, will the Mirror follow? Will the Sketch? Will some of the non-tabloid national papers?

At this moment all are denying that they would. But, as Mr T. S. Eliot once observed, Time present and time past/Are both per- haps present in time future/And time future contained in time past'. In other words, it's happened once before, it can happen once again. 'We've been a long time climbing out of the gutter', one editor said to me this week, 'and I don't want to see us back there. But I fear the worst if Rupert Murdoch gets going.'

It's perhaps an extreme point of view and unfair to Mr Murdoch, who has shown with at least one of his Australian papers that he can run a serious-minded, intelligent journal, even when the competition's hot. It may also be unfair to Mr Harry Lamb, the Sun's editor-elect, who .is a long way from being one of your near-illiterate sensationalists.

And there's another thing that may save the Sun from the gutter: there are still nearly a million loyal readers and their households hanging on to see what happens. If Mr Murdoch were to indulge in a course of action that lost them, he'd need to get a million back from somewhere pretty damn quick, and that'll take some doing. He has himself said that 'the Mirror reader is a very loyal reader'.

But this very fact is his biggest temptation. If he does fall for it, and go in for News of the World tactics, then we'll need all the dredgers and fans we can get hold of—the dredgers for bringing the muck up and the fans for throwing it at. In such a situation we're all likely to cop a bit of the dirt, whether we like it or not. Which is why, as I said at the beginning, my rapture is modi- fied. I'll give Mr Murdoch two cheers to be going on with. The third I'll save for a rainy day, when there's a.hope that any mud might have washed off.