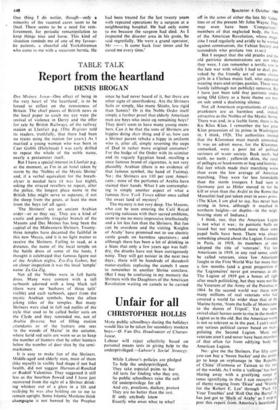 Report from the heartland

Des Moines, Iowa—One effect of being in the very heart of 'the heartland', is to be forced to reflect on the remoteness of Britain. The chief pieces of British news in the local paper to catch my eye were the revival of violence in Derry and the offer for sale by British Railways, of the railway station at Llanfair p.g. (The Register told its readers, truthfully, that there had been no trains using the station for years.) As I married a young woman who was born in Caer Gubbi (Holyhead) I was early drilled to repeat the whole of the noble name, nearly a pentameter itself.

But I have a special interest in Llanfair p.g. at the moment, as I'm in an hotel taken by storm by the 'Nobles of the Mystic Shrine' and if a verbal equivalent for the breath- alyser is needed here (it was last night), asking the strayed revellers to repeat, after the police, the longest place name in the British Isles might serve to separate, if not the sheep from the goats, at least the men from the boys (of all ages).

`The Shriners' are an ancient Arabian order—or so they say. They are a kind of exotic and possibly irregular branch of the Masons and Des Moines has long been the capital of the Midwestern Shriners. Twenty- three temples have decanted the faithful in this new Mecca, and it is no light matter to receive the Shriners. Failing to read, at a distance, the name of the local temple on the battle dress of some of the hosts, I thought it celebrated that famous figure out of the Arabian nights, Zsa-Zsa Gabor, but on closer inspection it was the local 'temple' name Za-Ga-Zig.

Not all the Nobles were in full battle dress. Many were content with a tall tarboosh adorned with a long black tail (there were no `bashaws of three tails' visible) and each tarboosh, apart from the mystic Arabian symbols, bore the often joking titles of the temples. But many Shriners were clad in full red outfits of the style that used to be called boiler suits on the Clyde and they reminded me, not of Arabia Deserta, but of filling station attendants or of the hunters one sees 'in the woods of Maine' in the autumn, where lurid red suits are worn so as to keep the number of hunters shot by other hunters below the number of deer shot by the semi- marksmen.

It is easy to make fun of the Shriners. Middle-aged and elderly men, most of them (like myself) in visibly bad shape if not bad health, did not suggest Haroun-al-Raschid or Rudolf Valentino. They suggested it still less as the bourbon flowed and I have just recovered from the sight of a Shriner drink- ing whiskey out of a glass in a lift and realising he was also holding on to me to remain upright. Some Islamic Moslems think champagne is not banned by the Prophet since he had never heard of it, but there are other signs of unorthodoxy. Are the Shriners Sufis or simply, like many Shiahs, less rigid than Sunnis? Or is the Noble Order itself simply a further proof that elderly American men are boys who insist op remaining boys? They don't seem to have many young mem- bers. Can it be that the sons of Shriners are hippies doing their thing and if so, how can a Shriner parent rebuke a hippy in uniform who is, after all, simply reversing the steps of Dad in rather more original costumes? For the badge of the Order with its scimitar and its vaguely Egyptian head, recalling a once famous brand of cigarettes, is not very plausibly Arabian (there is no evidence of that famous symbol, the hand of Fatima). No ; the Shriners are 110 per cent Ameri- cans ; none of the perfumes of Arabia have stained their hands. What I am contemplat- ing is simply another aspect of what a famous New York Times editor once called 'the sweet land of mystery'.

The mystery is not very deep. The Masons, who can be seen entering the Café Royal carrying suitcases with their sacred emblems, seem to me no more impressive intellectually and a lot less fun than the Shriners. But fun can be overdone and the visiting 'Knights of Araby' have promised not to use electric cattle goads on harmless spectators ; and although there has been a lot of drinking in a State that only a few years ago was half- dry, the drunks have not been outrageously noisy. They will get noisier in the next two days ; there will be hundreds of daredevil motor-cyclists replacing the camels I seem to remember in another Shrine conclave. (But I may be confusing in my memory the Shriners with the Daughters of the American Revolution waiting on camels to be carried off in the arms of either the late Mr Valen- tino or of the present Mr John Wayne. They

may even have been 'Compatriots':

members of that neglected body, the Sons of the American Revolution, whose maga- zine I read regularly and avidly to be warned against communism, the Fabian Society and scoundrels who profane ME. FLAG.) But I suspect that the old pranks and the old patriotic demonstrations are not what they were. I can remember a terrific row in the late war with which I had to deal, pro- voked by the friendly act of some chorus girls in a Chelsea music hall, who appeared wearing stars-and-stripes panties. These were hastily (although not publicly) removed. But I have just been told that patriotic undies using Old Glory as a basic theme are now on sale amid a deafening silence.

Not all American organisations of elderly pranksters are as harmless and, indeed, attractive as the Nobles of the Mystic Shrine.

There was and, in a feeble form, there is the Ku Klux Klan. I remember the last great Klan procession of its prime in Washington in, I think, 1926. The authorities insisted that the Klansman must march unmasked.

It was an adroit move, for the Klansmen, unmasked, were a poor lot of political saviours of WASP society. Buck teeth. bad teeth, no teeth ; yellowish skins, the result of pellagra or hookworm or hog and hominy; flat feet which made their marching worse than even the low average of American marching. They were far less formidable than the storm troopers I had seen in

(The Klan, I am glad to say, has never been strong in Iowa, although it reached its northern heights—or depths—in the neigh- bouring state of Indiana.)

I think, too, that the American Legion is not what it was ; its patriotic bulls are

issued but not remarked more than some papal bulls have been. There was always something absurd about the Legion. Founded in Paris, in 1919, its members at once

adopted the title of 'veterans'. Yet few Americans in 1919, in any real sense, could

be called veterans, since few Americans

the `Legionaires' never got overseas at all).

The Legion of 1919 got a bonus all right after much politicking, but they were not like the Veterans of the Army of the Potomac in 1864. In the second world war there were many millions of real veterans who had covered a world far wider than that of the

Marine hymn, 'from the halls of Montezuma to the shores of Tripoli'. Yet the same

swivel-chair heroes seem to rise in the modern Legion as in the old. But the American world is not so tolerant as in the past. I can't recall

any serious political career based on mani- pulating the Second Legion. Most real veterans aren't and never have been members of that often far from edifying body the American Legion.

No: give me the Shriners. For fifty cents you can buy a 'booze bucket' and the profits go to keep an orphanage in 'the Republic of China' (Formosa or Taiwan to the rest of the world). As I write a 'calliope' has been

blaring away with a gratifying range of

tunes (gratifying in that I can recognise all of them) ranging from 'Dixie' and 'Waiting for the Robert E. Lee' through 'Pack Up Your Troubles' and 'Roll Out the Barrel'. It has just got to 'Sheik of Araby' as .l stop to post this report frOni America's heartland.