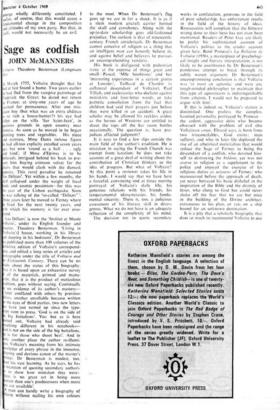 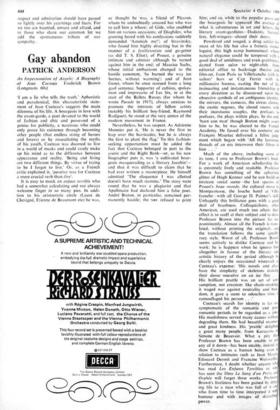 wire Theodore Besterman (Longmans 85s) In March 1755, Voltaire thought that he ad at last found a home. Two years earlier e had fled from the vampire patronage of Frederick the Great; he dared not return to France; at sixty-one years of age he earned for permanence. After one mis- aken buy (but what was an extra chateau o so rich a house-hunter?) his eye had alien on the villa 'Sur Saint-Jean', in pacious grounds in open country near eneva. As soon as he moved in he began lanting trees and vegetables. His niece nd mistress, Mme Denis (whose figure had all-too explicity extolled seven years 2n. but now 'round as a ball . . . ugly nd kind', if Mme d'Epinay is to be dieved), intrigued behind his back to pre- ent him buying crimson velvet for the hairs that would clash with the damask apestry. This rural paradise he renamed Les Daces'. Yet within a few months, the dell collapsed under the weight of local ends and cosmic pessimism—for this was he year of the Lisbon earthquake. Soon was talking of the 'so-called "Daces" '. hree years later he moved to Ferney where e lived for the next twenty years, and ith which his memory is for ever asso- iated.

'Les Daces' is now the 'Institut et Musde oltaire, under its English founder and rector, Theodore Besterman. 'Living in `oltaire-s] house, working in his library nd sleeping in his bedroom', Dr Besterman as published more than 100 volumes of the efinitive edition of Voltaire's correspond- e, and edited a long series of articles and onographs under the title of Voltaire and r Eighteenth Century. There can be no oubt about the status of this biography. hat it is based upon an exhaustive survey all the materials, printed and manu- ript, that it is the product of meticulous udition, goes without saying. Continually e see evidence of its author's mastery— letter conflated with others by previous !tors, another unreliable because written r the eyes of third parties, two new letters at have just turned up since the type- flat went to press. 'God is on the side of big battalions'. Yes; but as is here nted out, Voltaire had already said mething different in his notebooks- nd is not on the side of the big battalions, is for those who shoot best'. And in Y another place the author re-illurni- es Voltaire's meaning from his intimate owledge of every phrase in the immense, ttering and devious canon of the master's langs. Dr Besterman is modest, too, ut his vast learning. As he says, he has intention of quoting secondary authori- to show how mistaken they were: here is no great art in being more urate than one's predecessors when more Is are available'.

man can hardly write a biography of ltalre without nailing his own colours to the mast. When Dr Besterman's flag goes up we are in for a shock. It is as if a sleek modern aircraft carrier hoisted the skull and crossbones. Along with the up-to-date scholarship goes old-fashioned prejudice. The outlook is that of nineteenth- century French anticlericals. Dr Besterman cannot conceive of religion as a thing that an intelligent man can honestly believe in, and against belief and believers he pursues an uncomprehending vendetta.

His book is disfigured with pedestrian irony at the expense of things great and small—Pascal, 'Mlle Soubirous' and her `interesting experiences in a certain grotto at Lourdes', Teilhard de Chardin (a collateral descendant of Voltaire), Paul Tillich, and ecclesiastics who declaim against miniskirts and four-letter words, or take pathetic consolation from the fact that children had said their prayers just before they were killed in an accident. A great scholar may be allowed his reckless asides, as the heroes of Westerns are entitled to shoot the tops off the bar room bottles occasionally. The question is, have pre- judices affected judgment?

It is easy to find a few slips outside the main field of the author's erudition. He is mistaken in saying the French Church was exempt from taxation; he does not take account of a great deal of writing about the contribution of Christian thinkers to the idea of progress. But what of Voltaire? At this point a reviewer takes his life in his hands. I would say that we have here a forceful, convincing and at times moving portrayal of Voltaire's daily life, his generous relations with his friends, his temperamental idiosyncrasies, his funda- mental sincerity. There is, too, a judicious assessment of his literary skill in divers genres. What we do not have is an adequate reflection of the complexity of his mind.

The decision not to quote secondary

works in confutation, generous in the field of pure scholarship, has unfortunate results in the field of the history of ideas. Rousseauists will complain that the bitterest wrong done to their hero has not even been mentioned. Readers of Peter Gay are likely to prefer his sophisticated account of Voltaire's politics to the cruder account given here. Rend Pomeau's La Religion de Voltaire (1956), a masterpiece of psychologi- cal insight and literary interpretation, is not likely to be overthrown by Dr Besterman's ponderous attempt to break through its subtly woven argument. Dr Besterman's uncompromising conclusion is that Voltaire was 'at most an agnostic; and were any tough-minded philosopher to maintain that this type of agnosticism is indistinguishable from atheism. I would not be prepared to argue with him'.

If this is indeed so, Voltaire's stature is diminished: One prefers the complex, haunted personality portrayed by Pomeau-- the ardent, aggressive deist who became obsessed with the problem of evil (the Voltairean come, Ehrard says, is born from two irreconcilables, God exists: man suffers), and who in later life deplored the rise of an atheistical materialism that would reduce the Sage of Ferney to being the descendant of a codfish, who devoted him- self to destroying the Infihne, yet was not averse to religion as a supplement to the police and enjoyed the exercise of his religious duties as seigneur of Ferney; who manoeuvred before the approach of death, yet never betrayed his basic disbelief in the inspiration of the Bible and the divinity of Jesus, who clung to God but could never shake off the fear that we are but mice in the building of the Divine architect, extraneous to his plan, or rats on a ship bound for an unknown destination.

It is a pity that a scholarly biography that does so much to recommend Voltaire to our respect and admiration should have passed so lightly over his yearnings and fears. For we too are haunted, unsure and afraid, and to those who share our common lot we add the spontaneous tribute of our sympathy.