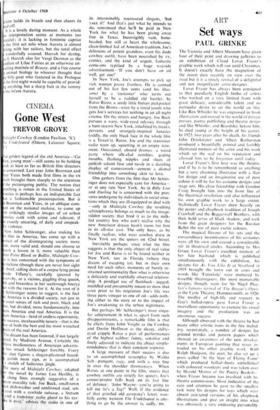 lidnight Cowboy (London Pavilion, 'X') he Undefeated (Odeon, Leicester Square, at golden legend of the old America—'Go 'est, young man'—still seems to be holding od, at least as far as British film directors concerned. Last year John Boorman and eter Yates both made first films in the us ich brought them sharply to the attention the picturegoing public. The notion that mething is rotten in the United States of merica is perhaps less an indisputable fact an a fashionable preoccupation. But it Boorman and Yates, in an oblique corn- nt on the national malaise, to come up th strikingly similar images of an urban nerica rank with crime and tolerant, if q exactly uncaring, of daily and unspeak- c violence.

Now John Schlesinger, also making his 4 film in America, has come up with a trait of the disintegrating society more ate, more valid and, should one choose to cern a lesson in it, more valuable than her Point Blank or Bullitt. Midnight Cow- v is less concerned with the symptoms of malaise (though these are never lost sight -brief, sidling shots of a corpse lying prone (side Tiffany's, carefully ignored by sers-by, or a vicious, giggling drag queen, ek and breastless in her seethrough finery) n with the reasons for it. At the root of it Schlesinger seems to suggest, is the fact t America is a divided society, not just in usual senses of rich and poor, black and te, but divided, more fundamentally, into am America and real America. It is the am America—land of endless opportunity, y success, inexhaustible luxury—that is the e of both the best and the most wretched cts of the real America.

he dream has been fostered, if not largely ted, by Madison Avenue. Certainly the less insidiousness of American advertis- has struck Schlesinger forcibly. Every er shot figures a slogan-plastered hoard- - garish neon sign, or is accompanied a snatch of ludicrous jingle.

he story of Midnight Cowboy, adapted the novel by James Leo Herlihy, is along lines strongly suggestive of a rn morality tale. Joe Buck, small-town in dish-washer and confirmed stud, sets east with a rawhide suitcase, a Stetson and a transistor radio glued to his ear. e it easy,' advises the radio in one of

its interminably murmured slogans, 'but TAKE it!' And that's just what he intends to do, convinced that he'll be paid in New York for what he has been giving away free in Texas. Incorrigibly vain, bone- headed, but still at heart the wholesome, clean-limbed lad of American tradition, Joe's delusions of potent grandeur, even his dude cowboy outfit, have been nourished by Tv, comics, and the kind of urgent, fantastic come-ons typified by a huge wayside advertisement-1f you don't have an oil well, get one!'

In New York, Joe's attempts to pick up rich women prove fruitless. He is conned out of his last few cents (and his illus- ions) by a 'customer' who turns out herself to be a raddled old hustler, by Ratso Rizzo, a seedy little Italian pickpocket from the Bronx—even by a timid youth who gets Joe's services for nothing in an all night cinema. On the streets and hungry, Joe Buck pursues a wary, wide-eyed odyssey through a bum-strewn New York, inhabited by freaks, perverts and strangely-inspired fanatics (oddly, the only black face in the whole film is a Texan's). Ratso, Joe and the transistor radio team up, squatting in an empty tene- ment. Occasional, absurd dramas—a weird party where silk-clad zombies, gaping mouths, flashing nipples and slices of pinkish salami fuse and tussle in a dazzling display of camerawork—cement a dismal friendship into something akin to love.

One gathers from the film that Mr Schles- inger does not especially care for America— or at any rate New York. As in Billy Liar and Darling he is concerned with the pres- sures undergone by individuals in social situa- tions which they are ill-equipped to deal with —only in Midnight Cowboy the resulting schizophrenia belongs as much to the image- ridden society that bred it as to the milk- fed country boy who can't realise why the new American dream hasn't room for him in its all-star cast. The only boys, as he finally realises, who wear cowboy dress in New York are the queers on 42nd Street.

Inevitably perhaps, since what the film suggests is that the only object of real value for Joe and Ratso is to be found neither in New York, nor in Florida (where they dream of escaping to), but in their own need for each other, moments of barely re- strained sentimentality flaw what is otherwise a delicately and truthfully observed relation- ship. A prodigal use of flashback—jagged, muddled and presumably meant to show that even prior to his migration Joe's life was three parts vinegar to one of oil—adds noth- ing either to the story or to the impact of Joe's awakening to the urban nightmare.

But perhaps Mr Schlesinger's most singu- lar achievement in what is, apart from such disappointments, a remarkable film is that he elicits from John Voight as the Cowboy and Dustin Hoffman as the sleazy, shifty- eyed cripple Ratso a pair of performances of the highest calibre: funny, sensitive and finely adjusted to indicate the abject simple- mindedness that is their constant tripwire.

A large measure of their success is due to an accomplished screenplay by Waldo Salt—pungent, racy, and with a nice line in over the shoulder throwaways. When Ratso, at one point in the film, sneers that cowboy outfits are strictly for queers. Joe's amour-propre falls back on its last line of defence: 'John Wayne—you're going to tell me he's a fag?' Well, if the evidence of that grizzled old cowpoke's latest, woe- fully corny western The Undefeated is any- thing to go by the answer is, sadly, no.